TU Graz is digging deep, with several institutes making contributions to almost every important project in Austria. In addition to construction and geology, the research focus is on tunnel safety. 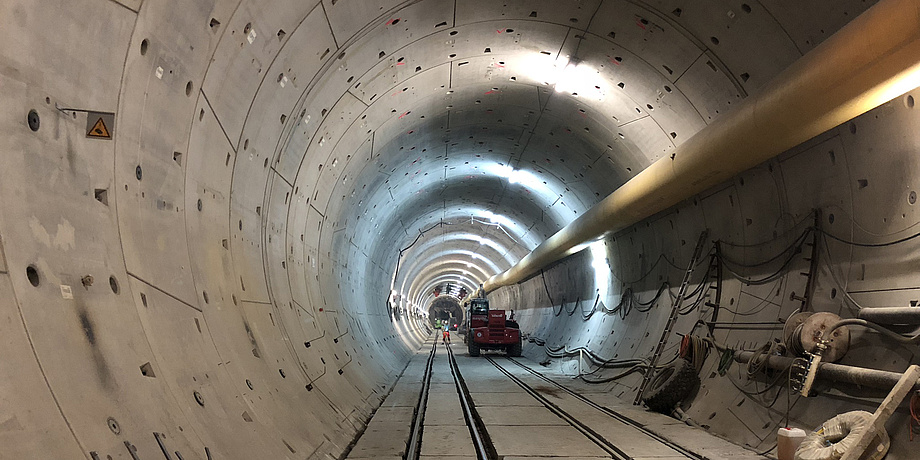 Deep inside the Koralm tunnel: TU Graz researchers have taken up residence at this and similar construction sites to investigate important aspects of tunnel construction. © IGSM – TU Graz

Wulf Schubert from the Institute of Rock Mechanics and Tunnelling has his office on the ground floor of the Alte Technik building. His desk is adorned with numerous pencil holders made of stone. “Actually these are all drill cores from various construction sites we have been working on,” he says, laughing. “These here are from the Koralm tunnel if my memory serves me right. And those are from the Semmering.” The cabinet behind his desk contains many more rock samples and bears witness to the many mountains Wulf Schubert has had an inside view of. He has been working at TU Graz for 26 years and built the Institute of Rock Mechanics and Tunnelling from scratch in 1992: “I was snatched up directly from the construction site and put on a professional chair at the University, so to speak. Of course this means that I had a wealth of practical experience, plus I was very keen on exploring the theoretical background of tunnelling in greater depth.” As of 1 October, Wulf Schubert will be professor emeritus at TU Graz. In this capacity he will work on projects and give selected lectures.

The Austrian way of Tunnelling

Because of the immediate vicinity of the Alps, the Institute focuses on alpine tunnelling. “While the Alps offer many spectacular picture postcard sights, the quality of its rock mechanics is not much to write home about. This situation presents a very special challenge, so it was predictable that many research projects would await us in this area.” He was only too right. Now researchers from TU Graz are involved in almost every important tunnel project in Austria. “When the Semmering tunnel entered my life I was only 37. It has stayed with me ever since,” Schubert smiles, himself a graduate from TU Graz. . 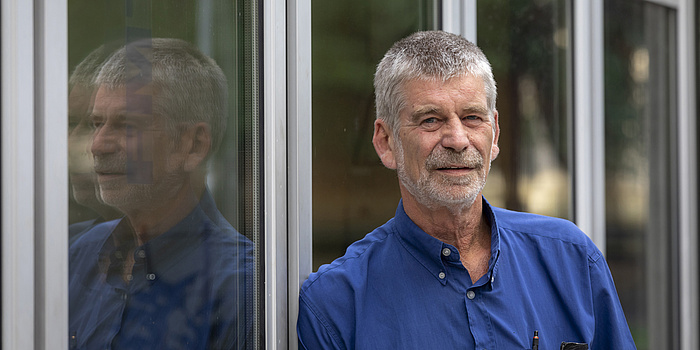 Wulf Schubert established the Institute of Rock Mechanics and Tunnelling at TU Graz.

As its name says, one of the most common tunnelling methods – the New Austrian Tunnelling Method – comes from Austria. Conceived almost 60 years ago, it represented an important stepping stone towards to an economic and above all safe method of tunnel construction. Before this development, various supporting structures were used to take up the rock pressure from above and from the sides. In the NATM, the objective is to build a tunnel in such a way that the rock is largely capable of supporting itself. Shotcrete and rock bolts are the primary means of support and rock improvement.

Together with the University of Leoben, Wulf Schubert developed and taught the NATM (New Austrian Tunnelling Method) Engineering course for working students. “So far we have been able to train about 70 students from 35 countries,” says the researcher.
A newly revised and upgraded version of the university course will be launched in 2019. Its objective is to teach students not only in-depth knowledge in NATM tunnelling, but also everything they need to know about tunnel boring machines (TBM). New subjects have been added to cover topics such as renovation, conservation of existing tunnels, safety aspects and risk analysis.
The university course is offered by TU Graz Life Long Learning. Further information on the course is available on the Life Long Learning site.

Many important tunnelling developments still come from Austria – and in many cases they can be traced to TU Graz. For example further developments in lining stress controllers – these are integrated into the lining as shock absorbers and protect the shotcrete from excessive stresses – or the further development of measurement data evaluation and interpretation methods. “Plus we are also intensively involved in the improvement of exploration methods on which any tunnel project must be based,” Schubert explains. Every tunnel project starts with exploration drillings to give the planners a comprehensive understanding of the existing geological situation. A geological model is then established on the basis of this information. During the construction of the tunnel, it is constantly adapted and adjusted. In cooperation with the Institute of Computer Graphics and Vision at TU Graz, photogrammetry – i.e. the possibility of reconstructing a 3-D model from a minimum of two images – is used to obtain a much more accurate, computer-generated image of the existing situation. “This project also spawned the 3GSM start-up, which now distributes the system all over the world,” Schubert adds, visibly proud of the performance of his team. 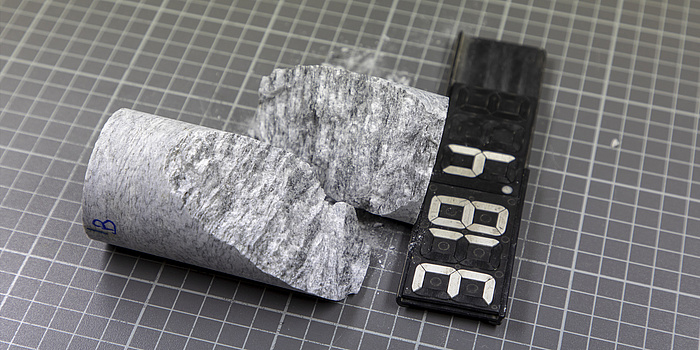 A drilling core, as investigated in the laboratories of the Institute of Rock Mechanics and Tunnelling at TU Graz.

A nervous system for tunnel linings

Schubert believes that structural health monitoring of tunnels will be key to future tunnelling developments. In this field, geotechnical engineers co-operate closely with Werner Lienhart and his team from the Institute of Engineering Geodesy and Measurement Systems, one of whose tasks is precisely the monitoring of tunnel constructions. “In modern tunnelling methods the key is that while the rock is allowed to move, the deformations have to subside so that the load-bearing capacity is retained,” Lienhart explains. “However, these deformations affect the stability of a tunnel’s concrete lining. And we want to be able to monitor this all over.” At present, there are only spot measurements on the surface, performed with conventional measurement equipment, but this can stand in the way during construction or in operation. Together with the Subsurface Engineering chair at the University of Leoben and with the support of the research department of ÖBB Infrastruktur AG and the Tunnelling Department, Lienhart and his team developed a new idea into a patentable invention. It is a type of nervous system made up of sensor cables embedded directly into the tunnel elements that completely monitor the condition of the structures without interfering with their operation. As a result, the measurement station does not have to be set up directly on site, but it can be located at a remote central site several miles away just as easily. 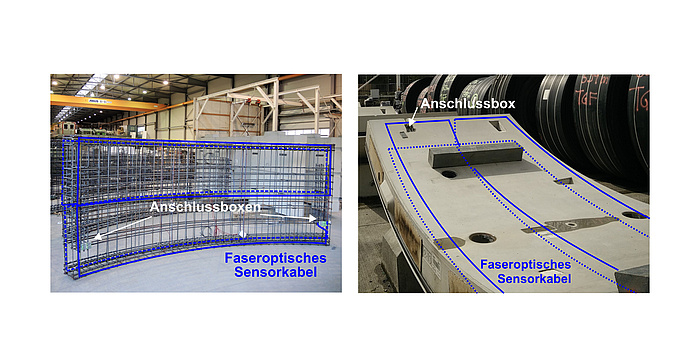 The “nervous system” made up of fibre-optic sensor cables is embedded directly in the tunnel element.

The backbone of the system consists of glass fibre cables installed in lining segments – individual prefabricated concrete pieces that together make up the tunnel lining and can be installed instead of shotcrete. A measuring device then sends light pulses through the glass fibre cables. However, in contrast to telecommunication applications, the interesting aspect is not the data transfer to the other end but losses and backscattering that provide information about the temperature and elongation at the site of measurement. “If we send in a pulse, the characteristics of the backscatter reveal the condition of each centimeter – the nervous system literally tells us the state of each lining segment and what influences it is subjected to,” says Lienhart. “This allows me to measure without any blind spots.” The system has been tested successfully on the lining segment test rig at the University of Leoben and installed in a tunnel. 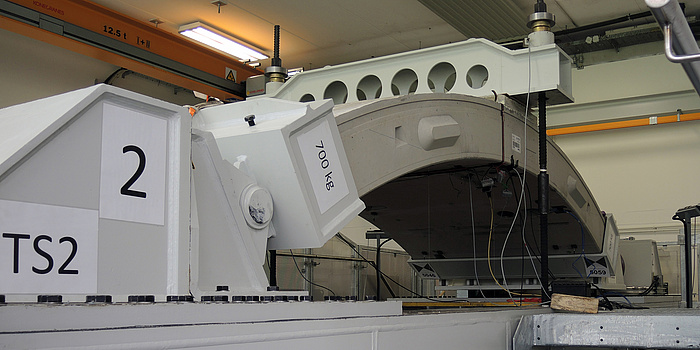 The stability of the individual tunnel elements is tested on the lining segment test rig.

TU Graz and the University of Leoben were granted a patent for their development in 2016. The team has been nominated for the 2018 National Patent Award and was introduced in a video.

When Wulf Schubert retires from his active leadership position at the Institute in October, experienced consulting engineer Thomas Marcher will take charge of the Institute of Rock Mechanics and Tunnelling. Like his predecessor, he was actively involved in tunnel construction when he was called to the venerable halls of Graz University of Technology. His idea of the future of the institute is not quite as deep as previously. In addition to alpine tunnelling he also wants to focus on shallow tunnelling, which is increasingly important in metropolitan areas. “Space is becoming increasingly scarce – for years, cities have been growing wider and higher. Slowly but surely, as the cities are approaching their limits, a new direction to create precious space is being explored. According to Marcher, cities are now going underground. “Above all we are talking about installations that do not necessarily need sunlight – for example indoor sports facilities, warehousing and storage space or other types of infrastructure.”

Technically, the challenges associated with this type of tunnel construction differ starkly from those that apply to tunnel structures at extreme depth. What we have to deal with here is not so much the stresses on the rock, but primarily the special mechanical properties of less firm ground in the shallow strata. Apart from loose material, the so-called transitional rock plays an important role. Its special characteristic is that while it cannot be described as classical soil material any more, the common rock classifications no longer apply either. The institute intends to develop a special laboratory testing device to analyse these special materials. Furthermore, it is also planned to develop models to come up with new or advanced material laws for this kind of material behaviour. 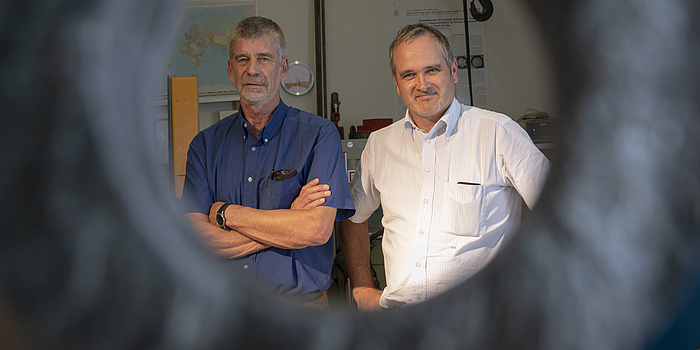 Wulf Schubert and Thomas Marcher in the laboratory of the Institute of Rock Mechanics and Tunnel Construction.

There is yet another field in which Thomas Marcher wishes to conduct intensive research at the institute. He wants to find out how BIM (Building Information Modelling) and AI (Artificial Intelligence) can be used optimally in tunnelling, and which new possibilities this can offer. “For example, artificial intelligence could be used to improve the current exploration forecasts to interpret the geological situation more objectively and constantly adapt the plans,” says Thomas Marcher. “Here the objective is to obtain constantly adapted and therefore ever more accurate forecasts to gradually minimize risks and improve economy.” 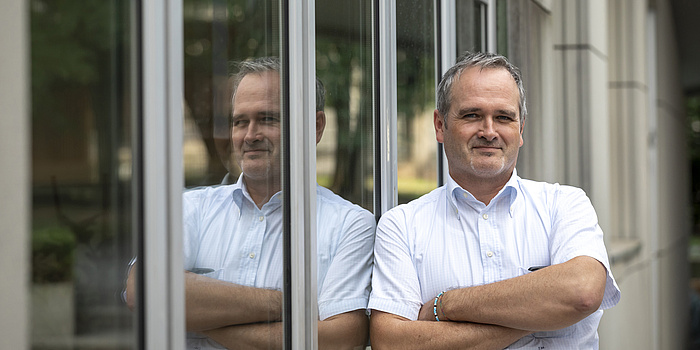 Thomas Marcher will head the Institute for Rock Mechanics and Tunnelling.

The future in rock and soil

All three researchers predict that tunnelling as a field of research has a great future: “The infrastructure for the transport of persons and goods is experiencing an unbelievable renaissance, both in urban areas and over long distances. To justify his view, Wulf Schubert points out that rail transport is much more comfortable and reliable than short-haul flights. “However, this calls for a considerable upgrading of the high-speed railway connections across Europe, which in turn depends on tunnels to achieve maximum straightness and level routing.“

ATC² is short for Austrian Tunnel Competence Center – a platform for innovation and know-how transfer in tunnel construction. In addition to developments in the field of the traditional sequential excavation method or NATM, it will also address continuous excavations as well as special civil engineering measures in underground construction. Special challenges and innovations in deep rock tunnelling, as well as urban (shallow) loose rock tunnelling, will be discussed.
ATC² is a cooperation between the Institute of Rock Mechanics and Tunnelling at TU Graz and the Subsurface Engineering chair at the University of Leoben. In the long term, it is to be established as an international platform for modern tunnelling.