Pumped-storage hydro power plants store electrical power efficiently and feed it into the grid seconds later. Behind the scenes there is some very sophisticated engineering, as a visit to the hydraulic lab at TU Graz shows. 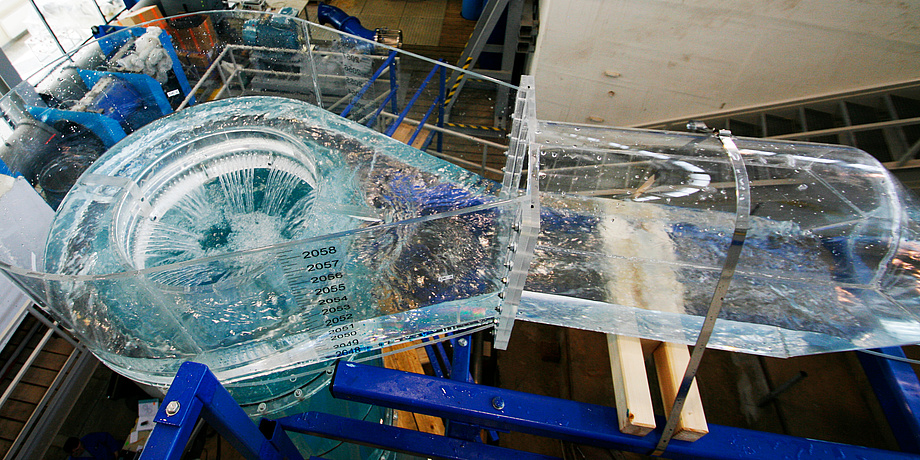 Inside the hydraulic laboratory at the Institute of Hydraulic Engineering and Water Resources at TU Graz. In the picture you can see the waterfall damping element of the model surge tank for the Obervermuntwerk 2 pumped-storage power plant in Vorarlberg.
For us Europeans it is the most normal thing in the world that the refrigerator runs without interruption or that we can turn on the reading lamp at any time. The fact that as much electrical power is produced every second as is being consumed is one of the great technical feats of the 20th century – especially when you think of the increasing integration of renewable energies. After all, nature has its own rhythms: wind and solar power plants cannot always supply electricity to the required amount at the desired time. In winter there are also days when neither the wind blows nor the sun shines – yet more than 10,000,000 Kilowatts of electrical power is needed in the Austrian grid and more than 80,000,000 Kilowatts in the German grid. "The surplus energy from productive days and hours has to be stored for being available during periods of low wind and sun or if extra power capacity is on demand. A pumped-storage hydro power plant is the only considerable as well as sustainable electrical storage in today’s state of technology," explains Gerald Zenz, head of the Institute of Hydraulic Engineering and Water Resources of TU Graz.

Austrian pumped-storage hydro power plants make an essential contribution to a stable electrical power supply in Austria and Germany by responding to fluctuations in the shortest time. When electrical power is required, water is led from the upper reservoir by way of the pressure tunnel to the power house or power cavern to set the turbines in motion. The turbines drive massive generators which produce the valuable electrical power. In this way power can be produced and fed into the grid within seconds. The special thing about pumped-storage hydro power plants is that water from the lower reservoir can be pumped back again when there is a power surplus in the system. In addition to that modern pump controlling techniques provide negative regulation also to keep the frequency in the power grid stable. "In the case of new pumped-storage hydro power plants, an overall efficiency of 80 per cent is achieved with regard to electrical power storage – this is the most efficient way to store large amounts of power. Currently a much discussed power storage is the rising technology power to gas (P2G) in which methane gas is produced via first producing hydrogen from electricity using renewable energy sources, and which is subsequently fed into the natural gas system. In comparison it has an overall efficiency of under 30 per cent," says Wolfgang Richter, staff member at the Institute of Hydraulic Engineering and Water Resources of TU Graz. 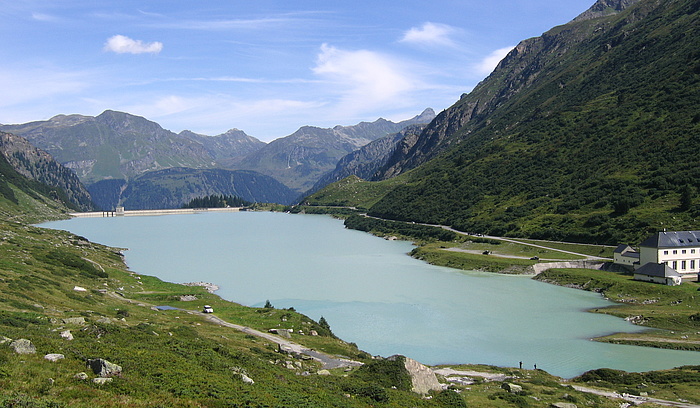 Lake Vermunt in Montafon in Vorarlberg with the Obervermuntwerk 1 hydroelectric power station, which belongs to Vorarlberger Illwerke AG. In 2014 construction was started on Obervermuntwerk 2 between the two reservoirs Lake Silvretta and Lake Vermunt. It is completely invisible in the mountains.

A surge tank for Obervermuntwerk 2 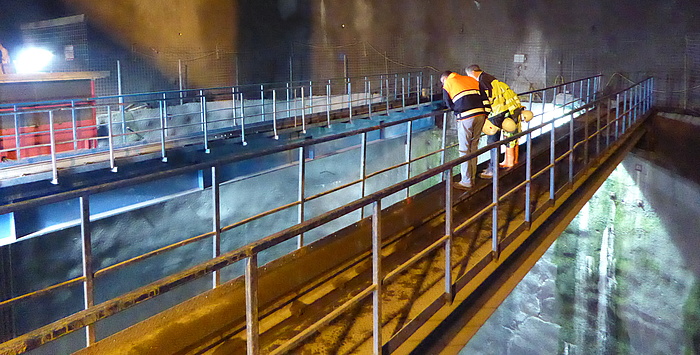 Construction work on pumped-storage power plant Obervermuntwerk 2. The photo shows workers looking into the huge riser shaft.
At the centre of TU Graz’s research activities is the surge tank, a structural element in the headrace tunnel of the hydropower scheme. In the case of this specific surge tank a mass of water of 105,000 tonnes in the pressure tunnel has to be accelerated and decelerated respectively to the demands of the power units. The surge tank is necessary to control this immense kinetic energy and to allow full controllability of the power station as well as providing quick start-ups and shut-downs. When the turbines are closed, the fast flowing water can flow into the surge tank and find its water level balanced via an oscillation that corresponds with the water level in the reservoir. This low frequency oscillations may precede after turbine closing for many hours. Moreover, the surge tank mitigates the pressure effect of high frequency oscillation, the so called water hammer phenomenon. This effect one knows as a short bang when closing a water tap very quickly. 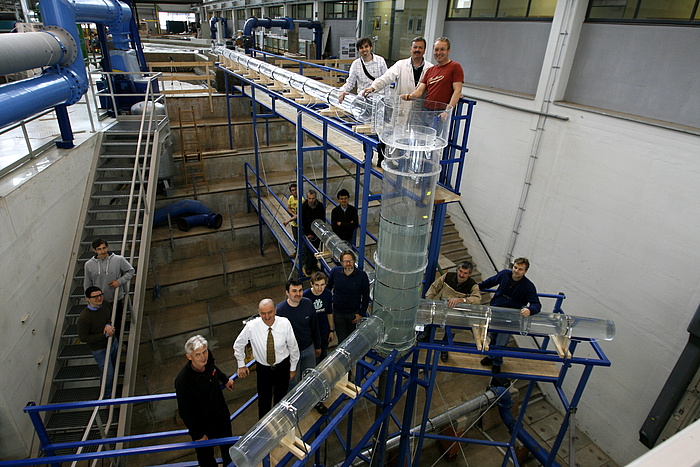 TU Graz is home to two hydraulic labs with a total area of 3,500 square metres for experimental hydraulic arrangements using true-to-scale models of power plants and other hydraulic structures.

The surge tank prototype for Obervermuntwerk 2 which was specially designed and tested at TU Graz has two special characteristics: the first ever built waterfall damping element with the energy of a massive waterfall evenly distributed over the cross section, and an optimised asymmetrical hydraulic throttle that additionally dampens the water oscillation. The journal "Geomechanics and Tunnelling" explains these special prototypes in more detail.