Lia Gruber started her academic career at a school with a focus on theatre. Then she switched from acting to electrical engineering. Today she is working on energy communities. 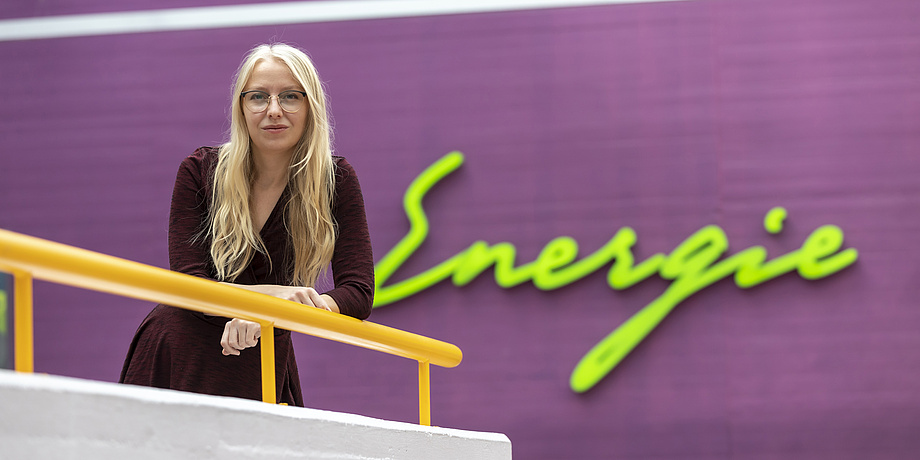 Lia Gruber is a PhD student at the Institute for Electricity Economics and Energy Innovation. © Lunghammer – TU Graz

Lia Gruber is standing in the foyer of the institute building at Inffeldgasse 18, at the top of the stairs, right in front of the handwritten “Energie” inscription by Nikola Tesla – an honorary doctor of TU Graz. If she were a character in a superhero comic, she would probably have her arms outstretched and an electric charge would glow around her fingertips. Because that’s how the young electrical engineer appears – full of energy. No wonder, since the 26-year-old is also called a “powerhouse” by Institute head, Sonja Wogrin.

All the more fitting, given that Lia Gruber’s work focuses on electricity economics and energy innovation. As part of her master’s thesis at TU Graz, which recently won a best paper award, she conducted research into areas that would be particularly suitable for deep-sea, offshore wind farms. Included are all wind turbines installed on the open sea with a water depth of not less than 60 metres. “Wind turbines in these areas, which are mostly far from the coast, achieve large yields because of the high wind speeds. More wind means larger turbines and a higher energy yield. But they require costly maintenance work as well as large investments in infrastructure. “Floating wind turbines are anchored to the sea bed. In the future they will nevertheless be less cost-intensive and more sustainable then normal offshore wind turbines,” explains the researcher.

In the meantime, Lia Gruber is employed as a doctoral student at the Institute of Electricity Economics and Energy Innovation and is researching energy communities that have recently been legally established. In such a community, several people join forces to jointly generate, store and consume energy. All Austrians can join an energy community, and can also leave it at any time. For example, if a neighbour owns a solar system that generates too much electricity for their own use, they can sell the electricity in the neighbourhood. And if, in turn, another neighbour has a powerful energy storage system, the energy community can store the generated electricity there together. “Such small communities can be very well balanced. But the question now is what happens when a person, and thus their requirements or ‘commodity’, drops out of the system? If a part suddenly goes missing or is added, how does it affect the overall system?”

From the Stage to the Electricity Industry

Lia Gruber’s career is not a classic one. Born in southern Styria, she attended a grammar school with a focus on acting. “I soon realized that I love theatre. But more as a hobby. Professionally, I had other things in mind.” For fun and a little interest, she attended a basic lecture on electrical engineering during some taster days. In doing so, Gruber recalled her childhood, when she watched her grandfather, an electrician, repairing refrigerators. After several internships at TU Graz, the Matura (higher education entrance qualification) graduate decided to study electrical engineering at TU Graz. “Those around me were a bit puzzled. Many people asked me whether I would be able to cope with the hard technical studies without a technical college education,” she says today with a twinkle in her eye. The topic of “women in technology”, especially in electrical engineering, is still relevant, as Lia Gruber knows. “I’ve always had female role models – at TU Graz, for example, Annette Mütze impressed me from the very beginning. She heads the Electric Drives and Machines Institute, where I got my first job. She made me feel that I was in the right place right from the start. And today I have another impressive boss in Sonja Wogrin.”