A modern energy system based on renewable energy like wind and solar power inevitably needs a storage system to provide energy on demand. 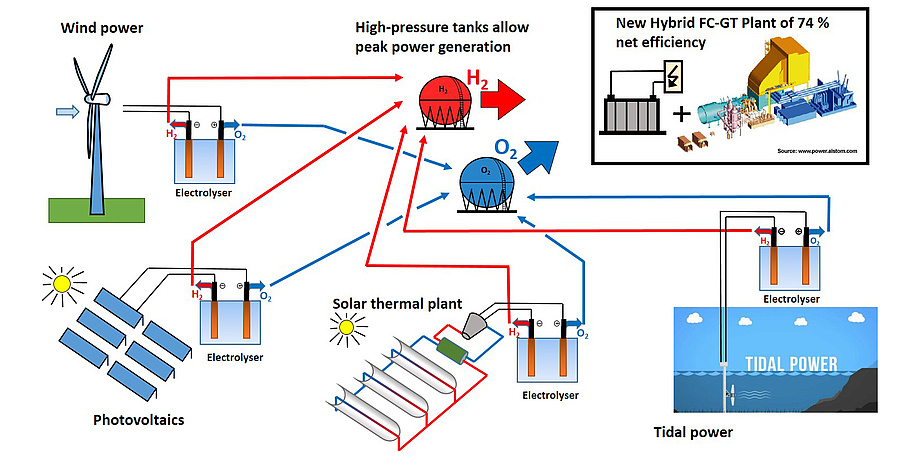 Figure 1: Scheme of a future energy system based on hydrogen as mean storage.

Hydrogen is a promising candidate for this task. For the re-conversion of the valuable fuel hydrogen to electricity a power plant of highest efficiency is needed. In order to support the transition to a renewable energy system the Institute for Thermal Turbomachinery and Machine Dynamics has been working on innovative highly-efficient power cycles fuelled with hydrogen and oxygen as well as on the modelling and improvement of solar and wind technology.

In order to counteract the threatening climate change most countries regard it as virtually self-evident that they must concentrate on the development of renewable energy resources as wind and solar power. Due to the fluctuating nature of solar and wind power a storage system is also inevitable for land-based electricity generation by renewable energy in order to provide energy at the times of demand. For this application hydrogen is currently being investigated as a large-scale storage medium with several pilot plants having already been installed.

Figure 1 shows how such a future renewable energy system based on hydrogen could look like. All kinds of renewable energy sources, such as wind, solar or tidal power, use their electricity excess which cannot be used immediately, to generate hydrogen and oxygen by local electrolysers. Hydrogen and oxygen is then delivered to highly efficient power plants for the re-conversion to electricity on demand. In this sense we proposed a hydrogen/oxygen-fuelled steam power plant using fuel cells and gas turbine cycle components in 2010. The concept is based on the assumption that oxygen is provided “freely” together with hydrogen from the electrolysers. In this hybrid cycle about 20 % of the net power output is generated by fuel cells, whereas the main output comes from the connected power plant. A net cycle efficiency of 74 % was predicted, which is far above the efficiency of state-of-the-art combined cycle power plants of 60 %.

In order to make such a system economically viable, the Institute for Thermal Turbomachinery and Machine Dynamics has been working on the improvement of individual system components for many decades. Thermodynamic modelling as well as numerical flow simulations were applied to simulate and optimize the component behaviour. In this sense M. Staggl and B. Lagler predicted the output of a concentrated solar power plant in their bachelor´s theses (see Figure 2). 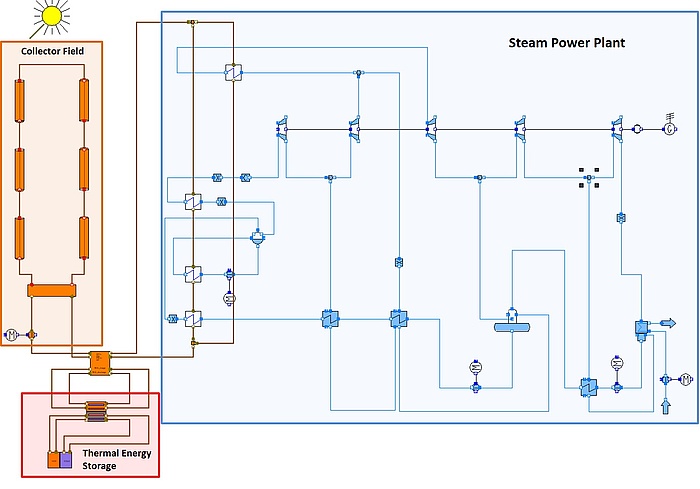 Parabolic trough collectors convert the solar radiation into the heat of the thermal oil which supplies a steam cycle plant of 80 MW. In order to extend the daily operation time, a heat storage system is additionally installed. A dynamic simulation allows the yearly electrical output to be predicted, depending on the location, the size of the collector field as well as of the heat storage system. The simulation showed that the utilization factor (ratio of generated work to theoretically possible work) of the basic plant is 55 % in Morocco compared to 43 % in Graz. If the size of the collector field is increased by 50 %, the utilization factor can be raised to 47 % in Graz, but on the other hand the utilized solar energy is reduced by 25 %. In this way, the simulation model offers the opportunity to find the most economic layout regarding collector field and storage size for a specific location.

During the rotation the flow seen by the individual blades changes dramatically, so that not all blades produce torque at the same time. Figure 3 shows the velocities within the rotating section for a wind velocity of 15 m/s and a tip speed ratio of 2.5. The difficult flow situation with large vortices and separated flows demands a thorough investigation in order to improve the efficiency. The predicted power co¬efficient is only about 0.4 in comparison to axial wind turbines with values up to 0.5. But the reduced work output can be easily compensated by a denser stacking. 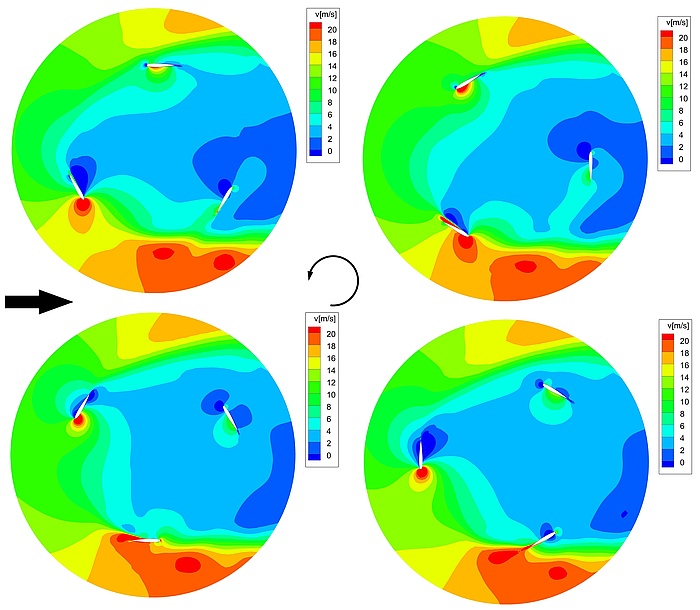 The realization of the hybrid cycle concept lacks – besides the development work needed for the turbomachinery components – the availability of fuel cells of large power output. Therefore since 2016 we have been working on a concept which also additionally uses the oxygen from the electrolysis for the hydrogen combustion, thus leading to a power cycle of remarkably high efficiency without the need for fuel cells.

This cycle is more or less the Graz Cycle, an oxy-fuel cycle for CO2 capture, which was invented by H. Jericha at our institute in 1995. Since then many further thermodynamic studies as well as component developments have been published. It is based on the internal combustion of fossil fuels with oxygen so that a working fluid consisting mainly of steam and CO2 is generated, thus allowing an easy CO2 separation by condensation. Due to its high efficiency it is a primary candidate for carbon capture in power generation.

The Graz Cycle is adapted for hydrogen/ oxygen combustion so that a working fluid of nearly pure steam is available. Figure 4 shows the principle flow scheme of the Graz Cycle plant for hydrogen combustion. The plant consists basically of a high-temperature Brayton cycle and a low-temperature Rankine cycle – a combined cycle. The Brayton part whose components are outlined in red consists of the combustion chamber, the high-temperature turbine and the compressors (C1/ C2). The Rankine steam loop consists of the heat recovery steam generator, a high-pressure steam turbine, a low pressure steam turbine, condenser, condensate pump, de-aerator and finally the feed pump supplying high-pressure water to the heat recovery steam generator. 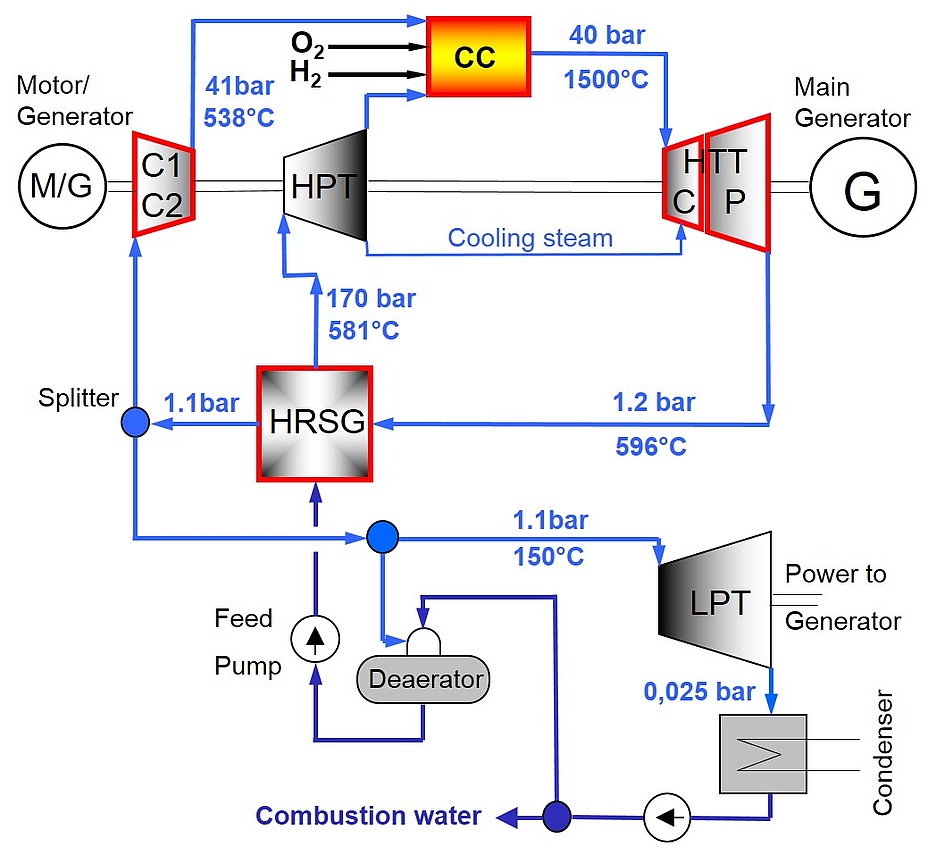 Pure hydrogen together with a stoichiometric mass flow of pure oxygen is fed to the combustion chamber, which is operated at a pressure of 40 bar. The high purity can be obtained by producing hydrogen and oxygen with electrolysers supplied by electricity from renewable energy as discussed above.

Similar to a conventional combined cycle plant the temperature operating range extends from a peak temperature of 1500°C at the combustor exit down to 21°C in the condenser, allowing high efficiencies according to Carnot. But the working fluid in both parts of the Graz cycle is the same, i.e. steam, so that the interaction between both cycles can occur by heat as well as mass transfer. So at the splitter only half of the steam is sent to the condenser to release its heat of vaporization by condensation whereas the other half is re-compressed in the gaseous phase in C1 and C2, so that it takes its high heat content back to the combustion chamber resulting in a remarkably high efficiency.

The simulations predicted a net efficiency of 68.5%, which is far above the efficiency of state-of-the art combined cycle plants if the oxygen can be provided together with the hydrogen by electrolysis. If the oxygen has to be generated in a separate air separation unit, the net efficiency is reduced to a still very competitive 61.9 %.

Since the working fluid is pure steam, new turbomachinery components have to be developed for this plant. Although we proved the feasibility of the new components, the necessary high development effort is the drawback to a quick realization. But if the transition to an energy system based on hydrogen occurs, high-efficient power plants like the Graz Cycle will be needed.

Wolfgang Sanz is head of the working group Turbomachinery Optimization and CFD Methods at the Institute for Thermal Turbomachinery and Machine Dynamics.