Michael Kerber from the Institute of Geometry at TU Graz uses topological methods – a branch of mathematics and geometry – to extract the secrets of complex data sets. 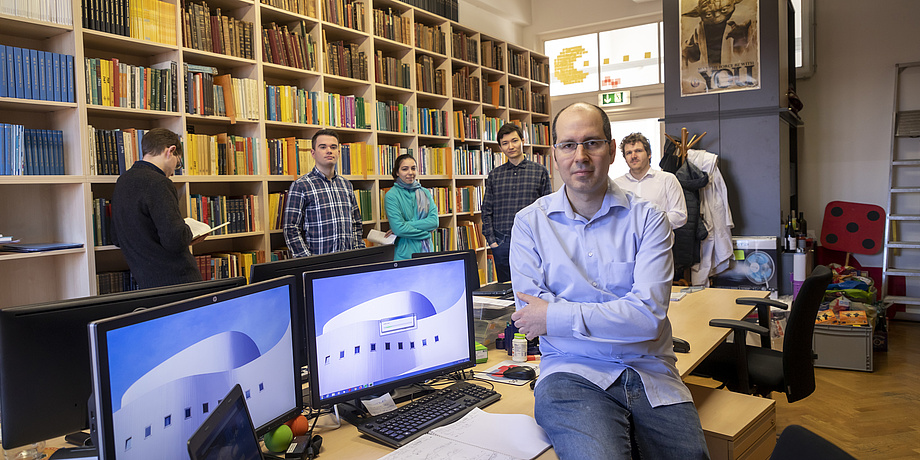 Michael Kerber and his team in the library. © Lunghammer – TU Graz.

Asking Michael Kerber a question is like knocking on a door and tearing the person behind it away from their thoughts. And when he answers, it feels as if he is opening this door and giving a glimpse into a hidden world of numbers, shapes and high-dimensional spaces.

He is often to be found in the well-stocked library of the Institute of Geometry – a whole landscape of shelves and jungles of books on mathematics, geometry and topology, cut through by desks and computer screens. Here he stands together with his working group, discussing problems and laughing almost non-stop about jokes and small mathematical allusions that are difficult to fathom by people from outside the profession and which trickle through as if from an unknown world

Topology – between mathematics and geometry

Michael Kerber's research area is topology – a field of mathematics and geometry. Topology deals with the connections between data points. For example, the surface of a sphere can also be seen as the set of all data points in three-dimensional space that are at an exact distance from a defined centre – the radius of the sphere. In contrast to geometry, however, topology is not concerned with the length of the distances, but with the connection between the points. In order to obtain a topological shape, these connections must not be separated, but they can be deformed, compressed or even stretched. For example, if you imagine the sphere mentioned before as a balloon. Whether it's empty or inflated, it will always remain a balloon – its surface is only stretched. If the balloon bursts, the different points lose their connection and then it is no longer a balloon. Topological shapes are treated in the same way as balloons – only not only in three-dimensional space, but also in much higher-dimensional mathematical spaces. 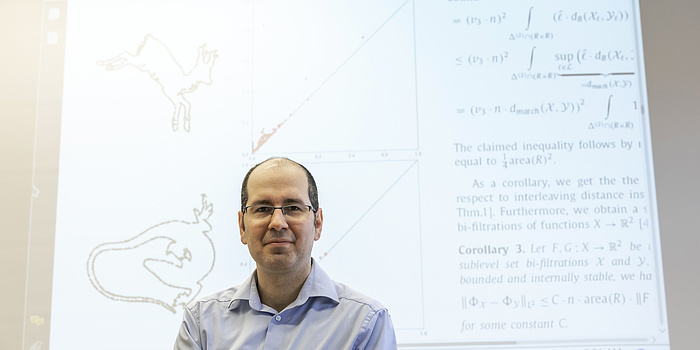 And this is where Michael Kerber's specialty comes into play: topological data analysis. Since the early 2000s, topological methods have been used for the analysis of large and complex data sets. "With these methods, we can deduce things from the data that would never be possible with conventional analytical methods," says the researcher enthusiastically. Kerber explains the approach on the basis of a research project by US colleagues: “They measure neuron activity in mice that move around in a square box, – whether the neurons are active or not. In this way the team receives a large amount of data that can be displayed in one room. If you look at the shape of these data points, they could be round, for example. An angle can then be assigned to each of these points. And the angle function correlates with the direction of gaze of the mice. The researchers can therefore tell in which direction the mouse is looking just from the neuron activity."

With these methods, we can deduce things from the data that would never be possible with conventional analytical methods.

Kerber himself is working on algorithms that efficiently comb through and analyse large amounts of data. Currently he is simplifying terrain data: "A landscape relief – such as that of Austria – stored in the land surveying office, for example, is usually several gigabytes in size," he explains. "We try to reduce the amount of data points without losing the most important features of the landscape. There are currently no efficient algorithms for this." With this method, data points can be moved up or down by a certain amount, for example – a slightly hilly landscape thus becomes "straight", saving many data points. "We can thus make the landscape reliefs much smaller and simpler without losing the important topological features – such as mountains and valleys. Admittedly, the map becomes less precise – but for the naked eye, hardly anything changes." With the new algorithm developed by Kerber's team, the simplification can be automatically generated in minutes and the resulting map is much smaller than the original.

At the end of Michael Kerber's answer, the door to his world of numbers, dates and shapes closes again. Until the next question, which knocks timidly on the door and seeks an answer.