Niklas Pontesegger visits apple trees for scientific reasons to investigate how climate change is affecting the fruit. For his work he has received a young talent award. 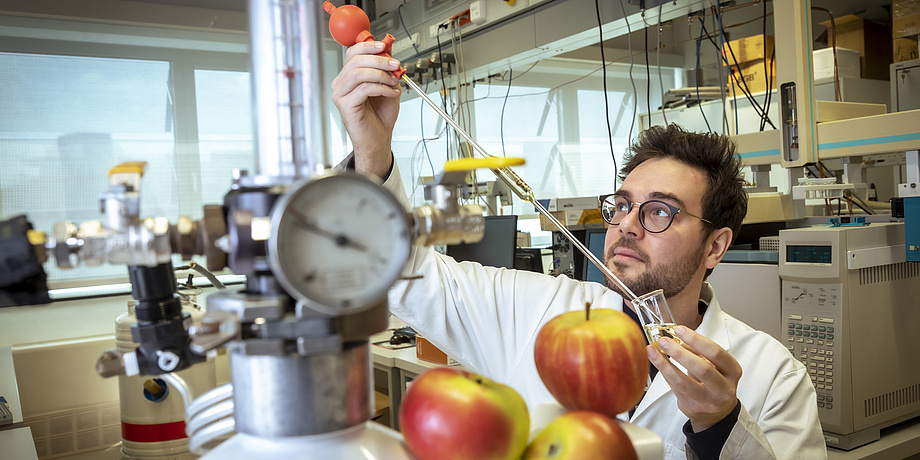 "My grandmother asks me every day which apples I’ve tasted," says Niklas Pontesegger, a doctoral student at the Institute of Analytical Chemistry and Food Chemistry. The 25-year-old researcher is working on a research project to study the effects of climate change – "We probably cannot avoid an increase of two degrees" – on Styrian apple crops and offer possible solutions for future-proof cultivation.

His grandmother has a pretty good idea of what his work is like every day. In 2020, for example, Pontesegger visited three partner farms in southern Styria, Graz and Sankt Gallen in Upper Styria every week for three months to harvest apples for his research. An impressive range of investigative methods were used in the analysis of the fruits. Pontesegger examined the fruits whole and presented them to an expert sensory panel, who assessed the taste characteristics; he then pressed the apple juice and examined its acidity and sugar content. To study the antioxidants, he freeze-dried the apple pieces. And then he cooked up an (inedible) apple purée in which salt, citric acid and vitamin C were used to prevent the enzymes from doing their work, so that even after harvesting, the apple can still be examined in its original form and in comparison with untreated apples as can the changes and break-down mechanisms. "The result is not unexpected – of course the climate influences the fruit," Pontesegger explains. "We are the first people to study the apple and these mechanisms in such detail." 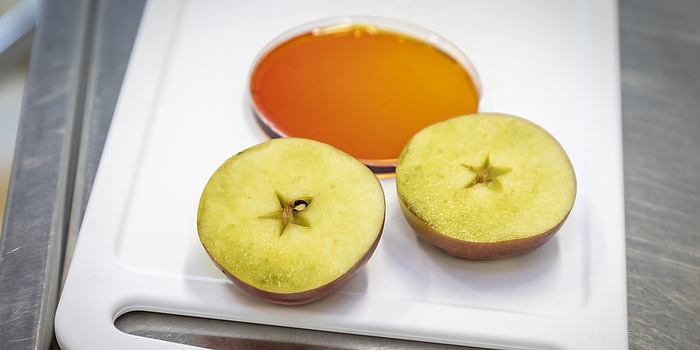 In this experiment, the starch content of the apples is examined. The discolourations show where starch is located in the apple. © Lunghammer - TU Graz

For his work, Niklas Pontesegger received the 2020 Giract Scholarship for first-year PhD students. This award is intended to support young researchers to gain a foothold in flavour research. They can use the prize money to purchase laboratory equipment or necessary software licenses.

Pontesegger began his academic career with a bachelor's degree in chemistry at Graz University of Technology (TU Graz). "At the time, I thought that after graduation I would know everything about molecules and be able to explain the whole world to myself. Which, of course, is not quite true," he says today with a smile. In his master's degree, he then specialized in organic chemistry, and became interested in working with laboratory equipment. But then his current doctoral thesis supervisor Barbara Siegmund put a glass of apple juice in front of him during a laboratory exercise. Pontesegger subjected it to a tasting according to scientific principles for the first time, and learned to distinguish the aromas and specifically assess the taste. "Of all 15 participants, I took the longest time at this tasting and was probably the most interested," he reflects. 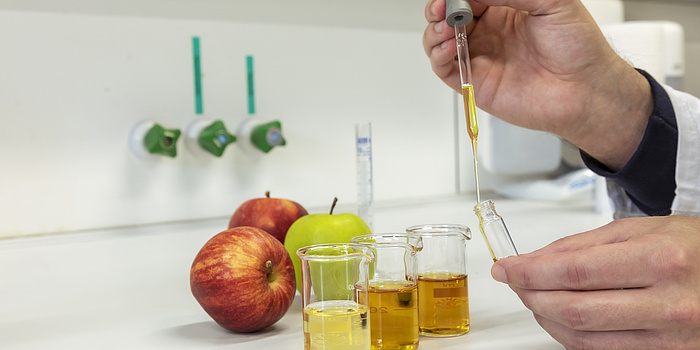 "Food is more than energy intake”

The fact that pleasure and taste play a major role in his life only further strengthened his interest in food chemistry. "For me, food was never just about energy. I love cooking and I’m good at using spices intuitively." Today, the food chemist is well on his way to becoming a laboratory facility himself and is in the midst of basic training to become a sensory expert. These sensory experts can accurately assess the quality of foods by smelling and tasting them and specifically name off-flavours. “I find it fascinating to use my own body as a measuring instrument," he says.

Pontesegger attaches particular importance to the everyday relevance of his work. "During my studies, I had a hard time talking about my work with those closest to me. No one really understood what I was doing as a chemist. Everyone was just hoping I would wear my white coat," he grins. "Today it's different. Everyone feels included and I really like that."

Despite his work focus, an apple a day is not on Niklas Pontesegger's menu – he saves this indulgence for harvest time in the autumn, when the fruit can once again be picked fresh from the tree.