Computer science is at a turning point. Novel Machine Learning (ML) methods are revolutionizing how we think about computation and build computers. ML is believed to provide a path to artificial intelligence. 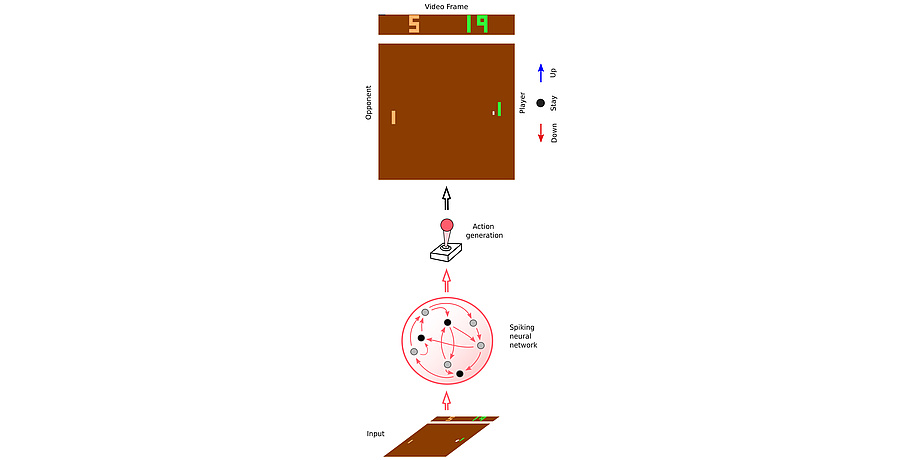 Current ML systems however are energy hungry, which renders them unsuitable for edge applications and contributes to environmental problems. Hence, in the forthcoming transformation, energy-efficiency will play a major role, in which respect there is a lot to learn from the brain.

Computers are like empty boxes. They provide possibilities but need to be filled with content to be useful. The way we have done this filling since the advent of computing has only changed recently. An expert writes a computer program which defines the computation performed by the machine. It turned out that this way of filling the box has a severe drawback. It is extremely hard to design programs for many computational problems, in particular those that can be easily solved by humans.

Computer Science is at a Turning Point

Within the last decade, tremendous progress has been made in this respect by using the Machine Learning (ML) approach. Instead of telling the computer how to exactly process each input in order to determine the desired output, one lets the computer figure it out by itself. For example, data sets exist with millions of images accompanied by labels that define which objects can be seen in each image. An ML algorithm can then figure out how to process input images in order to recognize objects in it. ML has been used to recognize objects or speech, to understand text, to play video games, or to control robots. Virtually all that progress was achieved by deep learning, an ML method based on deep neural networks. These successes have convinced many experts that deep learning provides a path to artificial intelligence.

Note that ML does not just provide another tool in the toolbox of the computer scientist, it potentially preludes and fuels three fundamental paradigm shifts in computer science. First, a shift from the era of programming to the era of training. Second, a shift from computers as useful tools to computers as intelligent systems. Third, as discussed below, it brings about a complete reworking of the computing hardware we use.

The Environmental Costs of AI

The von-Neumann architecture has been the dominant computing architecture since the early days of computer science. It features a central processing unit (CPU) that communicates with a random access memory. However, the fact that during a computation, data has to be shuffled permanently between the CPU and memory through a tiny bus (the von-Neumann bottleneck), renders this architecture inefficient. In particular, it is not suited to the implementation of neural networks used for deep learning. Neural networks are inspired by the architecture of the brain, where simple computational units (neurons) form a complex network. Computation in this network is extremely parallel and memory is not separated from computation. Hence, there is no von-Neumann bottleneck. The currently used better option involves graphical processing units (GPUs). While they do provide significant speedups, they are very energy hungry. This is not only a problem for low-energy AI systems in edge devices, it is also becoming an environmental problem. For example, the training of a deep neural network for the GPT-2 model was estimated to emit about five times as much CO2 as an average American car during its lifetime.

To build AI systems with reasonable power budgets, novel technology is needed. Here, the brain can serve as a source of inspiration. While having the computing capabilities of a super computer, it consumes only 20 Watts. Many universities and big IT players such as Intel and IBM have thus developd so-called neuromorphic hardware which implements neural networks in a more brain-like manner. Like the brain, it uses spikes as the main communication unit between neurons. Spikes are binary pulses that are communicated only if necessary, hence making the computation much more power efficient.

The Institute of Theoretical Computer Science is at the forefront of this research. It has worked on the foundations for spiking neural networks (SNNs) for more than 20 years, and is now utilizing its expertise in several projects where energy-efficient brain-inspired hardware is developed.

Neuromorphic Computing and Beyond

Wolfgang Maass is leading a research team at the Institute of Theoretical Computer Science within the European flagship project – the Human Brain Project. The team has developed the machine learning algorithm e-prop (short for eligibility-propagation) for training SNNs. Previous methods achieved too little learning success or required enormous storage space. E-prop now solves this problem by means of a decentralized method copied from the brain. The method approaches the performance of the best-known learning methods for artificial neural networks [1]. For example, we used e-prop to train SNNs to play video games (Fig. 1).

The energy-efficiency of neuromorphic systems can be further increased by using novel nano-scale circuit elements [2]. The potential of this approach is investigated in the Chist-era project SMALL (Spiking Memristive Architectures of Learning to Learn), launched this year and coordinated by the Institute of Theoretical Computer Science. Our team is developing computational paradigms that combine neuromorphic hardware developed by the University of Zurich with memristive devices from partners IBM Zurich research and University of Southampton.

Another computational substrate with high potential for ultra-fast computing are optical fibres. The Institute of Theoretical Computer Science is participating in the EU FET-Open project ADOPD (adaptive optical dendrites) that has just started. The project will develop ultra-fast computing units based on optical-fibre technologies that function according to the principles of information processing in dendritic branches of neurons in the brain. 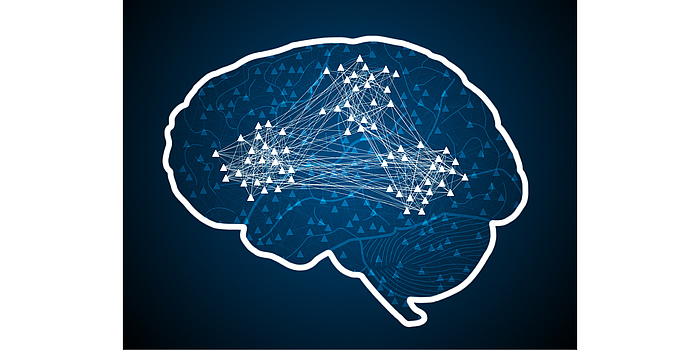 But there is much more to learn from the brain. It is known from neuroscientific experiments that neurons in the brain dynamically form assemblies to encode symbolic entities and relations between them. Recently, we have published work that shows how such assemblies could give rise to novel paradigms for symbolic processing in neural networks (Fig. 2) [3, 4]. In addition, the brain uses various memory systems to store information over many time scales. In an FWF project on stochastic assembly computations, we have recently shown how such memory systems can enable neural networks to solve demanding question-answering tasks (Fig. 3) [5]. 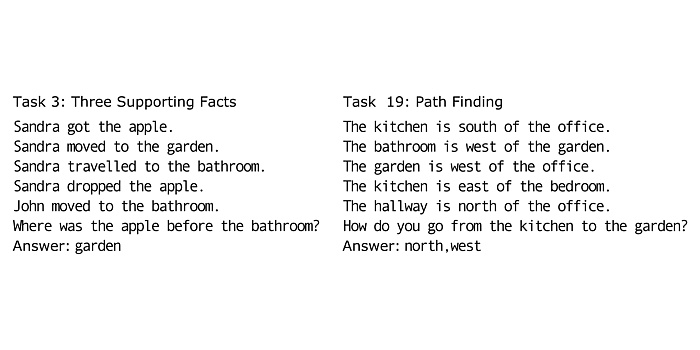 Figure 3: Two question-answering tasks from the bAbI dataset. The neural network with a brain-inspired memory system observes a sequence of up to 320 sentences and has to provide the correct answer to a subsequent question.

In summary, the way we think about computation in computer science has remained largely decoupled from the way neuroscientists think about brain function. The ML revolution will change that. Future computing machines will benefit from our knowledge about how the brain is able to generate intelligent behaviour on a tiny energy budget.

Robert Legenstein is head of the Institute of Theoretical Computer Science.