The ultra-high performance roadway on the first floor

If the vision of the TU Graz project QUICKWAY becomes reality, we will eventually travel in autonomous e-cars in a closed-loop roadway system built from ultrahigh performance concrete. 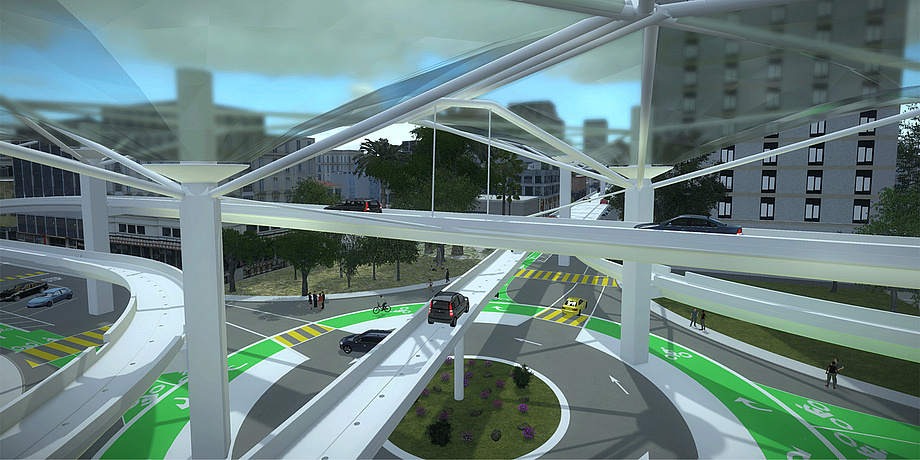 City of the future? The QUICKWAY-Team is planning a new roadway system from ultrahigh performance concrete.

Ultrahigh performance concrete, UHPC for short, has a durability of more than 200 years and is already recognised as THE construction material of the future. As a significant contributor to the development of this construction material for the last 17 years, TU Graz has also been constantly searching for new application methods. Following the sucessful construction of a UHPC road bridge in Völkermarkt, Carinthia, Professor Lutz Sparowitz from the Institute of Structural Concrete, now retired, took this idea to the Institute of Highway Engineering and Transport Planning at TU Graz. His vision was to develop a new mobility concept, one that could be positioned as a genuine alternative for today's solution of choice, the underground. 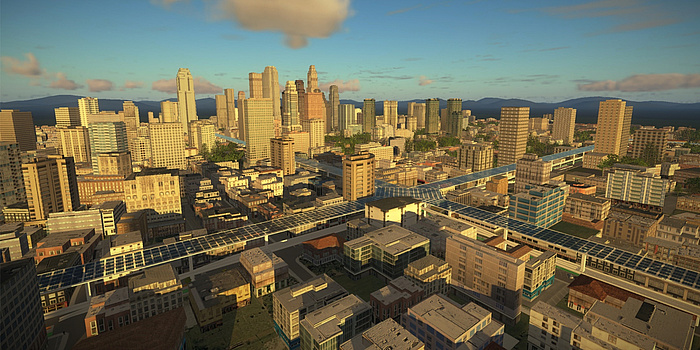 Electricity could come from solar panels installed above the roadway.

The idea was to build a slim UHPC roadway one to two levels above the ground on which only centrally controlled autonomous vehicles would travel. In August 2013, the idea had become an FFG (Austrian Research Promotion Agency) sponsored project under the name of QUICKWAY in which the Institute of Structural Concrete (Viet Tue Nguyen), the Institute of Construction Management and Economics (Christian Hofstadler) and the Laboratory for Structural Engineering (Bernhard Freytag) at TU Graz were participating. At the end of the three-year term of the project, they had come up with a comprehensive, future-oriented mobility concept for so-called megacities, i.e. cities with a population of 10 million or more. If the current demographic development forecasts are true and the trend towards urbanisation continues at the current rate, we will see at least 250 new megacities by the year 2050 that will urgently require complex transport solutions.

This is where the plan of Sparowitz and his team of researchers comes in. Built from UHPC, QUICKNET is a network of very slim elevated single traffic roadways. “We need a distance of approximately 30m between two buildings to be able to build our roadways,” says Sparowitz. The main roadway is on levels 1 and 2, that is on the first and second floor above ground. These roadways are intended for traffic that flows at a speed of 30 to 80 kilometres per hour. “This means that we are able to rival the efficiency of an underground train system,” explains Martin Fellendorf who studied the possibilities of autonomously driving vehicles and their control in the AVESTRA subproject.

We need a distance of approcimately 30m between two buildings to be able to build our roadways.

The stops will be built on level 0. But only selected vehicles with passengers who really want to get off at this particular stop will go there. According to the vision, 10 people wishing to travel to a maximum of three different stops will be in each vehicle. “The passengers will call their buses to the stop in advance by app, indicating their final destination. This will allow them to be assigned simply and efficiently to specific vehicles,” adds Sparowitz. But even at the stop the vehicles will not come to a complete standstill. Like today’s cableways they will only slow down to walking speed so that the passengers can get on and off. As passengers enter the vehicle on the right but exit it on the left, collisions between people are avoided. Once the vehicle has reached the end of the platform, it accelerates again by itself, drives up to level 1 and squeezes into the line of cars. The whole transport system is controlled centrally. “Central control calculates the best route to the destination for each vehicle in the system, taking into consideration the overall situation. This helps us avoid congestion and optimise the flow speed on the roadways,” explains Fellendorf. 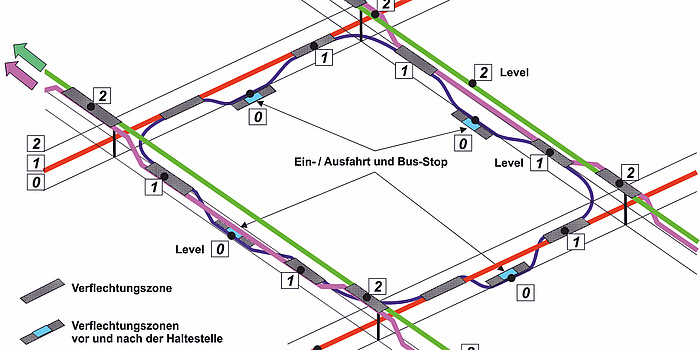 The main roadway is on levels 1 and 2; bus stops are built on level 0.

The current main focus of optimization is the loop density of the roadway network. “We can already achieve distances of less than max. 400 metres to the next stop,” says Martin Fellendorf about the progress of the research project. This is a big advantage of the new transport concept. Although current underground systems reach the same and similar loop densities, they do so almost exclusively in the town centres. The further away you get from the centre and the more you approach the outskirts, the longer the distance to the nearest public transport stop will become. By contrast, QUICKWAY can be extended simply and quickly and is therefore also very suitable for the periphery.

This means that we are able to rival the efficiency of an underground train system.

On top of passenger transport, light goods transport (vehicle and payload less than seven tons) can also be carried out by means of QUICKWAY.

According to Sparowitz, the ambitious plan is to build one or two kilometres of new roadways every day. The roadway system consists of a total of 50 standardised building blocks which can be combined to make road layouts for almost any conceivable urban configuration. These building blocks plug into each other like a modular system. Therefore they can also be taken out and put up elsewhere very easily. “It is like playing Lego,” says Fellendorf. There is one basic formwork for each component, which in turn can be used to cast many different derived formwork elements. “Thus we end up with say 100 concrete formwork elements in which we can cast the components simultaneously. Therefore we are able to increase the speed of construction immensely,” explains Sparowitz. “Of course we have simulated and planned the construction logistics of this approach, so we should realistically be able to achieve a very high construction speed.” 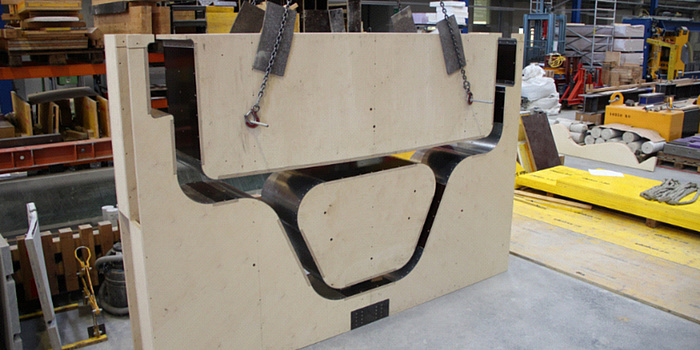 Sample piece for concrete formwork, which in turn can be used to cast different formwork elements.

Individual transport from door to door

Apart from its use for public transport, QUICKWAY will also be able to accommodate individual transport with autonomously driving taxis or privately owned vehicles. These also travel in the autonomous system on the QUICKWAY roadways, but can leave the closed-loop system via special entry and exit ramps to enter the “normal” traffic system. Upon request, these vehicles can therefore take passengers from door to door. “This system caters for those who want to drive in their own privately owned car, but above all it caters for persons whose compromised mobility does not allow them to use public transport,” explains Fellendorf. “Such vehicles for mixed transport applications are developed worldwide by various manufacturers, for example the Google car or similar.”

Vision for the future

“TU Graz is one of the pioneers in the construction of the roadways and the control of autonomous vehicles on these closed-loop roadway systems,” announces Martin Fellendorf with complete conviction. But the vision of the researchers in Graz goes beyond this.The mobility concept should not only be based on sustainable infrastructure but also on environmentally friendly electric vehicles. ”The required electricity might come partly from transparent solar panels installed above the roadway,” Lutz Sparowitz suggests. Furthermore, there are plans to build roof-covered roadways for individual twowheeler transport with bicycles and e-motorbikes on level 0 of the roadway.

The required electricity might come partly from transparent solar panels installed above the roadway.

The concept is coherent, but its implementation presents many challenges. According to Martin Fellendorf, building a short test roadway does not make sense with this system – this would neither test the system itself nor its acceptance by people. This is why a genuine system decision in a growing urban environment will be necessary – just like decades ago when the underground systems were first introduced. This has led the researchers to contact governments willing to give this project a chance. Singapore was the city chosen to simulate the project; there are very detailed population and mobility data available. “If it was decided tomorrow, it would take us only five years until we could transport the first passengers on QUICKWAY.“