Mimicking evolution in the lab: Kateryna Lypetska takes us on a foray into the world of biocatalysis, which enables an ecological production of pharmaceuticals to be carried out. 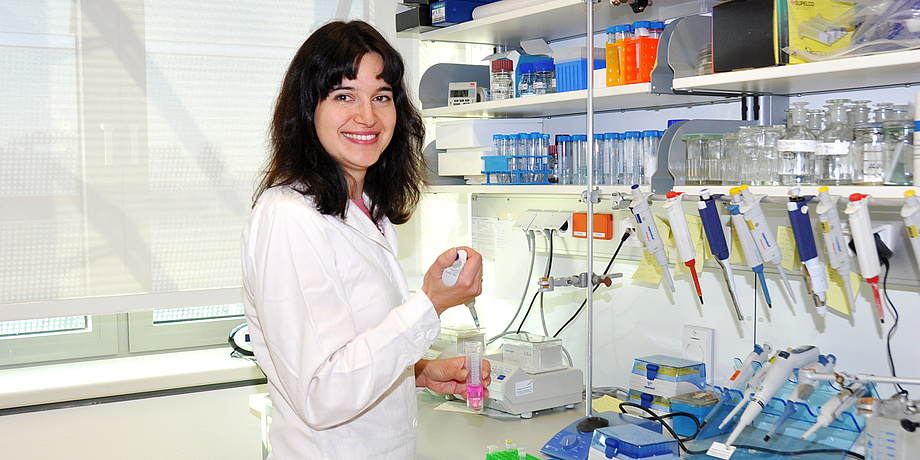 The research area of Kateryna Lypetska is biocatalysis, in which enzymes accelerate chemical reactions or at least initiate them. Enzymes are the universal “workers” in cells. They are present in all living things – from microorganisms to humans. There are tens of thousands of different enzymes which all work effectively and precisely. They affect precisely defined groups of molecules which they modify in specific places in a specific way. Enzyme and substrate fit together like a key in a lock. “In contrast to ‘traditional’ chemical or physical catalysts used in industry, enzymes are the tools of a softer chemistry,” says Kateryna Lypetska. “They react in aqueous solutions, without high pressure and usually at room temperature.”

For pharmaceutical production, the potential of biocatalysis is in the development of new processes with highly specific product conversions which not only work in a way which spares energy and resources but also produces less waste material. After all, not all traditional chemical and physical catalysts are efficient and eco-friendly. Apart from the desired product, the latter can also result in subsidiary products as waste, for example, which often has to be disposed of in a costly way or which is even harmful to the environment. On top of this, these catalysts often only start to work at high temperatures.

Enzyme-driven biocatalysis is not only more eco-friendly, but also has an additional important advantage: it is highly selective. Most traditional catalysts are not highly selective. Beside the desired molecule, its “mirror image” is also present in certain quantities and reacts differently in chemical reactions to bring about a different effect – especially when used as a pharmacological material. Two enantiomeric forms are mentioned here. The importance that the presence of two enantiomeric forms can have in a molecule of a medication is demonstrated by the tragic example of Contergan (thalidomide) in the 1950s. The pharmaceutical was a 1:1 mix of both enantiomers. It turned out later that one enantiomer had a positive effect as a sedative and tranquilliser while the other led to serious malformations in newborns. In nature, enzymes produce only one enantiomer from natural substrates in organisms. “So, by means of biocatalysis, we can produce ‘pure’ pharmaceutical products which consist almost 100 per cent of only one enantiomer,” explains Kateryna Lypetska.

The research path towards biocatalysis was taken by the graduate chemist in the course of her PhD studies in Graz. “After my master’s studies in chemistry at Lomonosov State University in Moscow, I worked for one year as an advisor in the chemical industry. But I missed the ‘adventure of research’ and the exchange with like-minded researchers very much,” says Kateryna Lypetska. So she applied for the international doctoral programme Molecular Enzymology at TU Graz. Her PhD mentor, Herfried Griengl, is one of the founders of biocatalysis in Graz. “And he introduced me to a particular class of enzymes called threonine aldolases, which I’m carrying out research on in my current Hertha Firnberg project.” 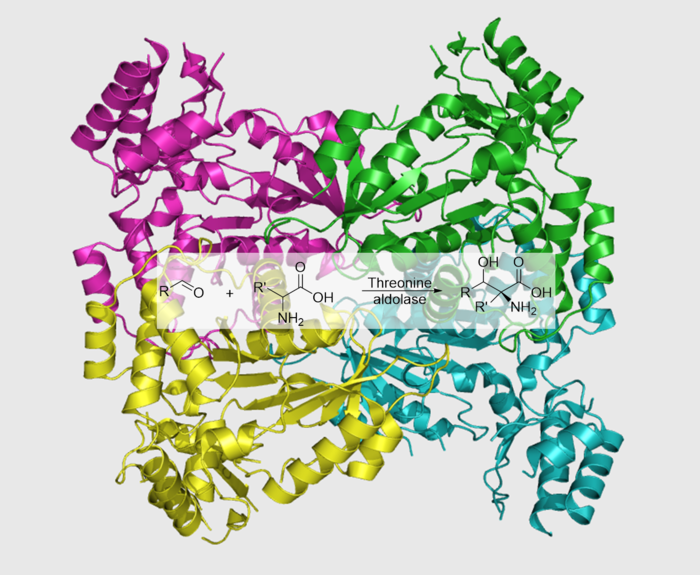 Threonine aldolases catalyse the stereoselective synthesis of β-hydroxy-α-amino acids.
“Threonine aldolases have a great potential for the future of biocatalysis, but it will take a while before we can unleash their potential and make use of them technologically. And here, the basic research which I can conduct in the framework of the Hertha Firnberg Scholarship at TU Graz is crucial,” explains Kateryna Lypetska. And she goes on: “Millions of years ago, enzymes of simple organisms were originally not selective. One enzyme was able to catalyse many different reactions. In the course of evolution the structure of organisms became much more refined, and at the same time enzymes became increasingly specialised for particular molecules.” To make use of threonine aldolases technologically and to be able to optimise them for new substrates, Kateryna Lypetska analysed the natural evolution of the enzymes using tools of bioinformatics. With the help of genetic engineering methods, she mimics in the laboratory within a few months what evolution mastered over millions of years.

In the Chemistry/Biocatalysis Master’s Programme, students can carry out a bachelor’s or master’s thesis in Kateryna Lypetska’s working group. For more information about the research area, see the website of the Institute of Organic Chemistry of TU Graz or directly Kateryna Lypetska.

Hertha Firnberg Scholar Kateryna Lypetska (née Fesko) has won several prizes for her research work, most recently the Karl Schlögl Prize of the Austrian Academy of Sciences in 2010. Born in Ukraine, she lives with her husband and two daughters in Graz and conducts research at the Institute of Organic Chemistry at TU Graz.
Kateryna LYPETSKA
Dr.rer.nat.
Institute of Organic Chemistry
Stremayrgasse 9
8010 Graz, Austria
Tel.: +43 316 873 32411
kateryna.lypetska@tugraz.at
www.tugraz.at/institute/orgc/forschung/arbeitsgruppe-lypetska/