Alexander Bergmann and his team at TU Graz’s Institute of Electronic Sensor Systems have made it their aim to improve our quality of air and life by means of sophisticated sensor systems. 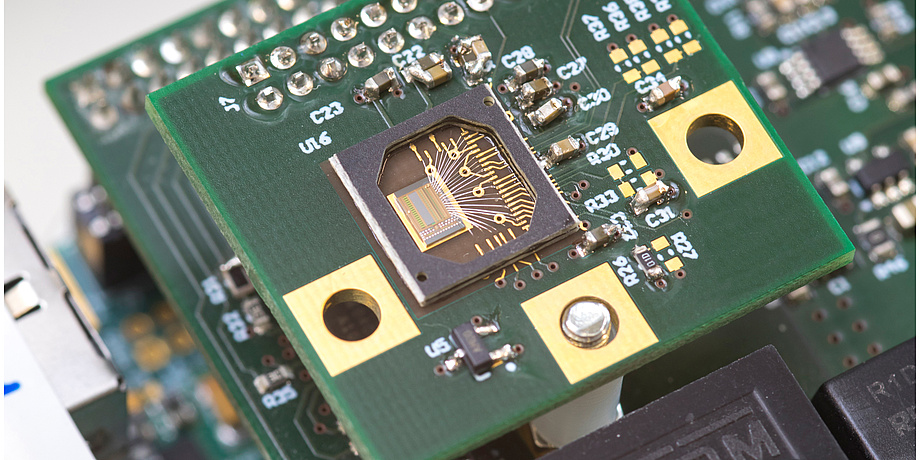 A small but powerful sensor was built at the Institute of Electronic Sensor Systems, which measures particles and gases in environmental air. © Lunghammer – TU Graz
It’s a radiantly beautiful day as Alexander Bergmann talks about his research area in his Graz Inffeldgasse office, which is bathed in light. The air is clear, the sunrays warm and the 10-square-metre room with radiantly white walls smells fresh – all general signs of good air quality. And it is exactly the air quality and its measurability that is at the focus of the research interest of Alexander Bergmann, who set up the newly established Institute of Electronic Sensor Systems at TU Graz two years ago and has been heading it ever since. His research is in the field of environmental sensor systems: he primarily develops sensors which measure particles and gases in environmental air. Among other things, this includes particulate matter, nitrogen oxides and car exhaust gases. “I was always interested in quantifying things which our human senses couldn’t apprehend. What, how much and where,” he says, explaining his interest in sensor technology, for which he developed a passion in his student years and which now inspires his young team of meanwhile ten doctoral students. 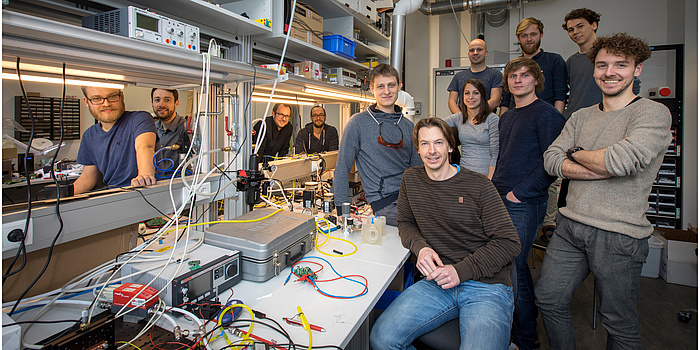 Alexander Bergmann and his team at the Institute of Electronic Sensor Systems.

The vision of a greener world

Today, research at the Institute is working towards implementing one vision in particular: making a publicly accessible air-quality index. This index should be able to describe air quality exactly at particular places. For instance, it could allow the healthiest cycle routes to be filtered out, and reveal the degree of air pollution at home or at work, thus also allowing for improvement measures. “This would have massive effects,” says Bergmann. “For instance on property prices and other things.” But aren’t there already air-quality maps? “Yes, there are. But the data pool is taken from fewer public measuring stations with less corresponding spatial resolution and then projected using appropriate models. Up to now a comprehensive measurement hasn’t been possible because we haven’t had sufficient cheap and accurate sensors,” explains Bergmann.

I was always interested in quantifying things which our human senses couldn’t apprehend.

At the Institute researchers are working on particularly small sensors which could be integrated, for instance, in small devices such as networked air conditioners in houses, mobile phones and wearables. “With these we could create a close-knit network of sensor nodes which could make really accurate statements,” he explained. Of course, with all the talk of ever smaller sizes, these sensors would have to be completely reliable and ensure a high data quality, because “The best analyses are only as good as the data which the sensors supply.”

For use in houses, mobile phones and wearables, the sensors have to be designed in small sizes and at low cost without measuring more inaccurately than their shoe-box sized and expensive relatives. This poses challenges to the developers, Bergmann adds: “On the one hand, we have to make sure that even in the case of the smallest possible architectures, sufficient air will be sucked in so that representative statements can be made about it. On the other hand, the particular matter has to be removed completely so that it doesn’t contaminate the surface of the sensor and make it unusable.” The sensors are just like the people they help: breathing in and out in polluted air is not easy – for neither man nor machine. 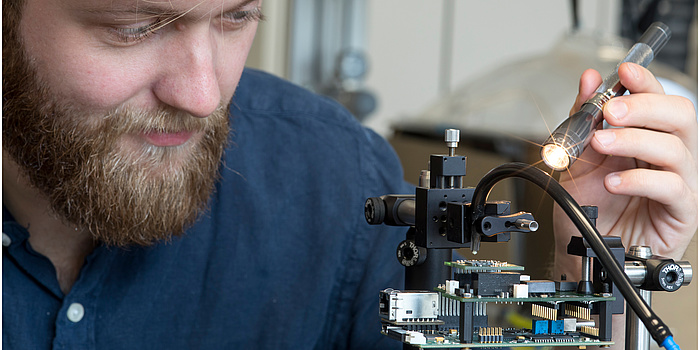 A doctoral students demonstrates, how tiny the new sensors really are. The actual sensor is located right under the small black tube.
Also, Alexander Bergmann and his team are participating in the large-scale EU project DownToTen, which is being funded by the Horizon2020 funding framework. In this project, researchers from Finland, Greece, Germany, Italy, Great Britain and Austria share a common goal of correctly measuring the concentration of automobile exhaust gas particles down to a size of ten nanometers to pave the way for future, stricter EU regulations.

In the future, Alexander Bergmann would additionally like to use nature as a model for his research. For instance, to investigate what sensors plants use to perceive their environment. “Unfortunately we humans, for example, don’t have any inbuilt sensors to measure particular matter.” One area of application in a subsequent step could be health. At the Institute, we have been thinking a great deal about sensors, for example, ones which can make use of a wide variety of methods to be able to measure glucose or lactate values without relying on annoying needle pricks. “The technologisation of biology will have a huge impact in the future,” predicts Bergmann.

The time seems to be perfect to be grappling with sensor technology. More and more data is being collected, transmitted to the digital world and analysed using Big Data approaches. And in the automation of production in high-tech factories, for example, better and better sensors are needed to be able to work efficiently and reliably. If you think about all the current hype about autonomous driving, the necessity of comprehensive sensor systems is obvious. Other applications range from baking ovens to snow cannons, or, as Alexander Bergmann puts it: “You can always do with a good sensor.”