Drones for search and rescue missions, as modern carrier pigeons and for inspecting critical infrastructure. TU Graz researchers teach drones how to see and think. 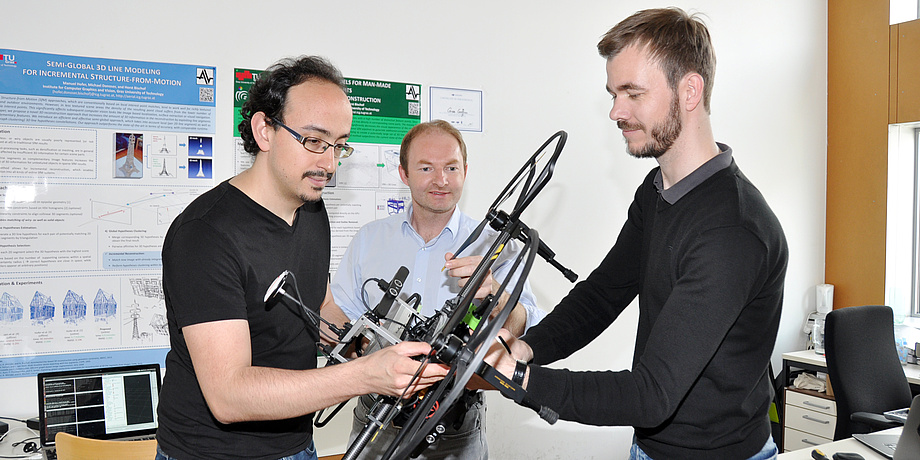 f.l.t.r.: The researchers Jesus Pestana Puerta, Friedrich Fraundorfer and Michael Maurer at the Institute of Computer Graphics and Vision at TU Graz are preparing the drone for the next flight. © TU Graz
The word “drone” is for many people associated with the use of radio-controlled fighters in war zones or total surveillance from above. But unmanned aerial vehicles – also known as MAVs (micro aerial vehicles) and UASs (unmanned aircraft systems) – are becoming increasingly important for civil and scientific purposes – for instance, for search and rescue missions in rough terrain. For these types of missions, drones have to be fully autonomous so that they can fly close to the ground and recognise buildings and trees on their own and avoid them. The software used on board by which these drones can securely navigate through the air and land accurately and safely is being further developed by researchers at the Institute of Computer Graphics and Vision at TU Graz.

Sensor technology for drones with autopilot

“We’re developing image-processing algorithms which are integrated in the computer systems of drones and which can intervene in the drone control system,” explains Friedrich Fraundorfer from the Institute of Computer Graphics and Vision at TU Graz, who heads the Aerial Vision Group. To ensure that the drones can fly autonomously and in a targeted way, algorithms process the image data supplied by cameras installed on the drone. In most cases the image data is synchronised with data acquired in parallel from the motion and orientation sensors on board the drones. “The drone is equipped with a measuring system (IMU, inertial measurement unit) which constantly records acceleration and rotation rates. Together with the image data, the spatial movement and geographical position of the drone can be determined independently of any type of position-finding signals in the environment – for example – GPS. This is essential for indoor spaces where GPS can’t be used,” explains Fraundorfer. The drone obtains a detailed 3D model of the landscape by means of the camera pictures which helps it to interpret the environment and to navigate without collisions. The computer systems installed on the drone have to be small, lightweight and powerful since the processing of image data in real time is very computer intensive.

Drones for search and rescue missions

The use of drones for search and rescue operations represents a challenge for researchers. Drones support search and rescue teams for missing persons in rough terrain. MAVs have to operate particularly precisely, reliably and fast and transmit data in real time to the rescue team. In this area the new generation of Graz drone research has borne fruit. In summer 2016 the “Graz Griffins” – a team of master’s and doctoral students headed by Friedrich Fraundorfer – made it to the final round of the international “2016 DJI Developer Challenge“. The task was to fit out drones with software to enable them to search for particular markings close to the ground which represent casualties. After that, the drone has to fly back to the vehicle, land safely and pass on the obtained data and determined positions. This video shows the drone at the 2016 DJI Developer Challenge. 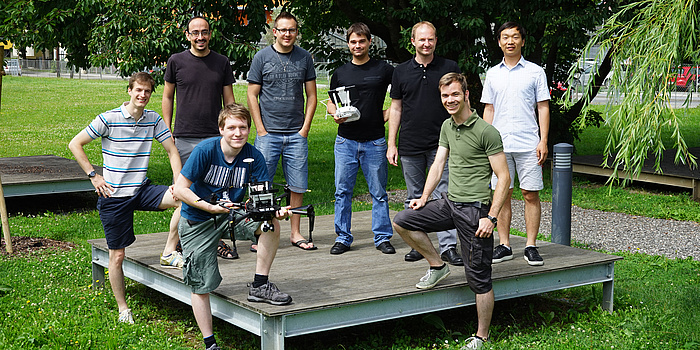 The “Graz Griffins” – a team of master’s and doctoral students headed by Friedrich Fraundorfer – made it to the final round of the international “2016 DJI Developer Challenge“ in summer 2016.
The findings contribute to the current research in the group to further develop the technologies and make them available for civil areas of application. One such application is postal delivery via drones, which reliably drop the package at the desired delivery address. This video shows a package delivery service using a drone. A feasibility study is currently being carried out by the Austrian postal service.

In the future, drones could be used efficiently in open mining. Because when carrying out a blast, you cannot exactly estimate the consistency of the excavated material and thus the size of the individual rocks. The excavated material could be automatically “inspected” from above by a drone after blasting. Evaluating the picture data could lead to improved transport organisation. Intensive research is being done in this area of application by Friedrich Fraundorfer and his team in the SLIM EU Horizon 2020 project.

Research is also being carried out on using drones for the fully automatic monitoring of critical infrastructure (for example, tunnels) or to prepare slopes in order to detect dangerous landslides automatically as early as possible. At the moment hill slopes are monitored using laser and radar measuring. The measuring devices, however, are permanently installed and can therefore only inspect a fraction of the slopes.

Researchers at the Institute of Computer Graphics and Vision at TU Graz are leaders in the development of sense-and-avoid technology.

The most recent development centre of the online mail-order company Amazon, which wants to offer a drone delivery service in the future, is located in Graz.
Friedrich FRAUNDORFER
Ass.Prof. Dipl.-Ing. Dr.techn.
Institute of Computer Graphics and Vision
Inffeldgasse 16
8010 Graz, Austria
Phone: +43 316 873 5020
fraundorfer@icg.tugraz.at
www.tugraz.at/institute/icg