Astrocytes are non-neuronal brain cells that contribute to the exchange of neurotransmitters and ions. They are involved in various cognitive functions like sleep and memory formation. 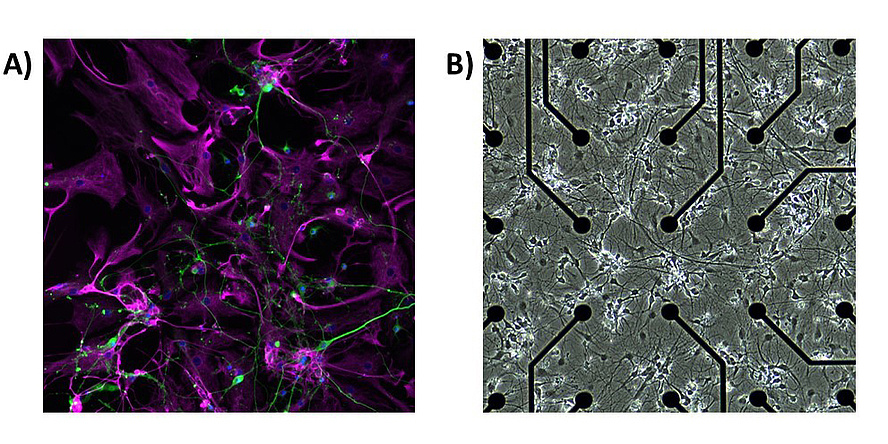 Figure 1: a) Stained neurons in green, astrocytes in magenta, and the cell nuclei in blue. b) Neurons and astrocytes distributed over the electrode field of a microelectrode array.

Using computational models, we simulate the interaction between neurons and astrocytes. By perturbing parts of the signaling pathways, we investigate astrocyte behavior in diseases like Alzheimer’s, epilepsy, and schizophrenia.

In the past, neurons in the brain were considered the sole contributors to cognitive function. This view has been changing over the last four centuries, and other non-neuronal cells are now being investigated as to whether or how they contribute to normal and pathological functions of the brain. One of these socalled glial cells are astrocytes, which even outnumber neurons in the human brain. They were initially described as star-shaped. A few main branches extend from the soma and subdivide in a very fine tree of subbranches. Hence, astrocytes look rather like a sponge. Astrocytes in the human brain are twenty times larger than their counterparts in rodents.

Astrocytes are involved in various homeostatic processes in the brain. They take up and release neurotransmitters and ions. Astrocytes are also connected to blood vessels in the brain and transport nutrients to neurons and other cells. They play a role in the sleep cycle and memory.

At a synapse, electrical and chemical signals can be passed from one neuron to another. An astrocyte can enwrap the synapse, and exchange neurotransmitters, ions, and nutrients with the contacted neurons. In the human brain, one astrocyte can contact up to two million neuronal synapses. Astrocytes also link to other astrocytes by gap junctions and, in this way, form non-overlapping domains. Hence, neurons and astrocytes build tightly interconnected networks (Figure 1a).

Unlike neurons, astrocytes are considered non-excitable, which means that they do not exhibit action potentials. Their primary signal is calcium and can be captured by means of calcium imaging. In this way, the binding of fluorescent molecules to calcium ions can be measured using microscopes. Astrocytes are involved in almost all brain pathology which influences the morphology and function of those glial cells.

At the Institute of Neural Engineering, one of our research areas is to develop computational models of single astrocytes (Figure 2) and in combination with neurons. As a first step, we analyze experimental data, for example, from calcium imaging and extract features such as the peaks in the signals. Then, we develop mathematical equations that describe underlying biophysical processes inside and outside of a cell. The parameters of the computational model are then adapted so that they resemble the experimental data at hand. One aspect that we investigate using the computational models is how different morphologies influence calcium and other ionic dynamics. Furthermore, we study the neuron and astrocyte interaction in larger networks. So far, we have been interested in specific aspects of the role of astrocytes in Alzheimer’s disease, epilepsy, and schizophrenia. Using our computational models, we can study pathways in the astrocytes that are currently not accessible by experimental techniques or where the experiments are too expensive.

Figure 2: Simulation of the calcium dynamics over time (second 15 to 20) in an astrocyte. The astrocyte was stimulated by glutamate (indicated by the yellow lines at the tips of the astrocyte).

I learned about astrocytes during my time at the former Tampere University of Technology, now part of Tampere University, in Finland. There, we started to develop our first computational models of astrocytes. Side-by-side, we were also doing in vitro experiments with calcium imaging and microelectrode arrays (MEAs). Neuronal and astrocytic cells can be cultured on those MEAs (Figure 1b). These chips contain a field of electrodes over which the cells form a network over time (Figure 1b). After roughly a week, the first signal of electrical activity from the neurons can be measured. The networks can then be perturbated with chemicals or electrical stimulation, mimicking specific alterations in a disease. In collaboration with Christian Baumgartner and his PhD student Daniel Ziesel from the Institute of Health Care Engineering, we are currently establishing in vitro experiments with neuronastrocyte co-cultures to be able to continue that research line.

Kerstin Lenk has been an assistant professor at the Institute of Neural Engineering since April 2021, focusing on computational neuroscience. The goal is to understand how neurons and other brain cells such as astrocytes interact with each other and how this interplay is disturbed in diseases.