Over the last two decades researchers have been working on a contrast-agent free magnetic resonance imaging (MRI) method called Arterial Spin Labeling (ASL) for detecting blood flow changes within the brain and other organs. Recent improvements in imaging hardware, new strategies for efficient data sampling and sophisticated reconstruction algorithms have now brought the application out of research into clinical practice. 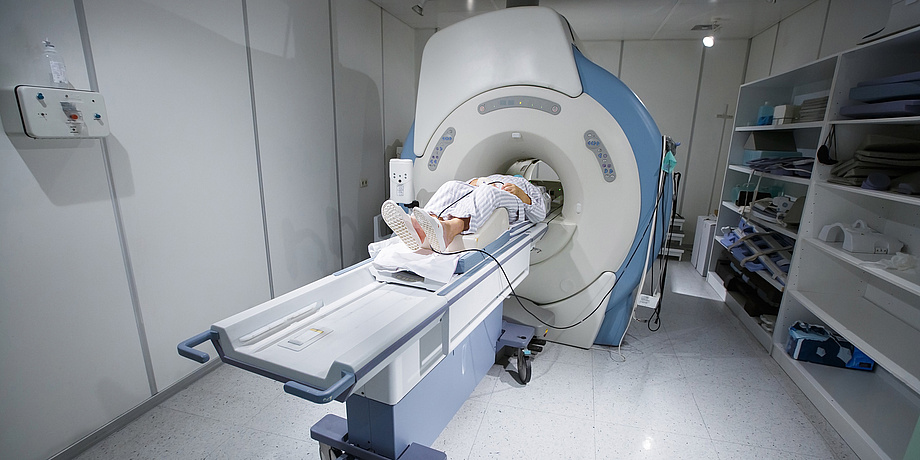 Perfusion is an important physiological parameter for the diagnosis of organ function and is often used in various brain diseases, especially those associated with the cerebrovascular system, such as vascular stenosis or stroke. In Austria alone, about 20,000 people suffer from strokes very year. The search for an alternative to contrast-agent based perfusion imaging methods is of great interest, as contrast agents can generally lead to side effects. In MRI the medical effects of discovered gadolinium deposits in the brains of patients who have received multiple injections of gadolinium are under discussion. In addition, the determination of changes in physiological blood flow through brain activity is of great interest and requires a complete non-invasive technique for multiple applications in research.

A very promising technique for the noninvasive measurement of brain perfusion is MRI-based Arterial Spin Labeling. In contrast to established perfusion imaging techniques that use an exogenous contrast agent, ASL uses arterial blood from the subject’s own body as an endogenous tracer. The arterial blood water is temporarily magnetically labeled by inverting the orientation of the atomic nuclei in the magnetic field of the scanner. For this reason, ASL is very suitable for repetitive measures to trace disease progression and treatment effects e.g. in brain tumor imaging and characterization or in acute stroke. In ASL the perfusion-weighted image is obtained in principle by subtracting a “label image” (L), in which the arterial blood water is magnetically labeled using specific radiofrequency pulses, and a “control image” (C), without magnetic marking. By subtracting the two images (C-L), the signal from the static tissue is eliminated and the resulting signal is proportional to the blood flow. In practice different measures are necessary to really suppress the background and for quantitative analysis a kinetic model has to be applied. The main disadvantage of the method is that the signal effect is very low and typically leads to perfusion images with a low signal-to-noise ratio (SNR). In order to obtain clinically usable images with sufficient SNR, the measurement must be repeated very often. This leads to clinically unacceptable measurement times with an increased risk of movement artifacts, which can make the perfusion images clinically non-interpretable. The motion sensitivity is a special problem for scanning patients with specific diseases such as strokes and limits the applicability of ASL for such important patient groups.

To meet these challenges, a method for accelerated motion-robust data acquisition was implemented and combined with a new reconstruction technique for undersampled 4D data. The methods have been developed in collaboration with partners from the University of Southern California Los Angeles (PI: Danny JJ Wang) and the University of Graz (Kristian Bredies).

The basic idea of the new motion-robust sequence and reconstruction algorithm is illustrated in Figure 1. 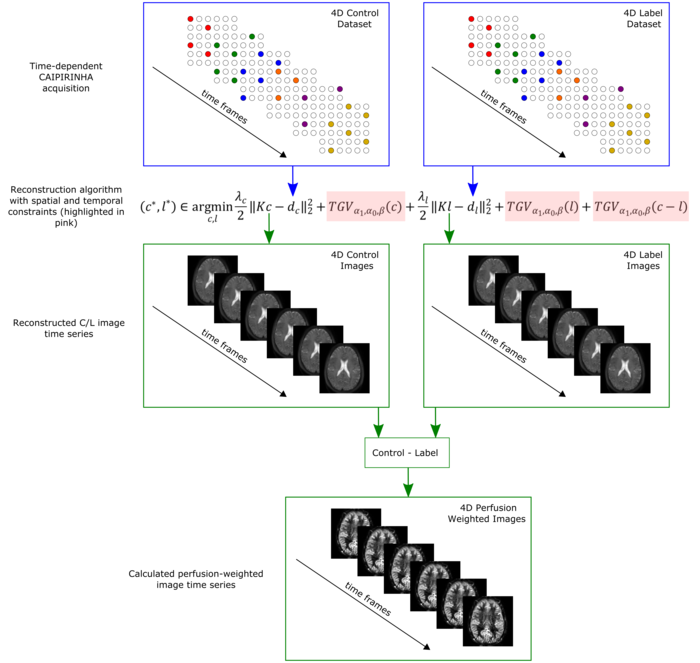 Schematic illustration of the developed acquisition and reconstruction scheme.

This sequence uses a time-dependent so-called CAIPIRINHA sampling pattern to increase the temporal incoherence between subsequent acquisitions. This special sampling accelerates the acquisition of one ASL image by a factor of six compared to the current standard acquisition approach which improves the motion robustness and allows 3D single shot acquisitions of the whole brain. An additional incorporation of spatial and temporal constraints (Total Generalized Variation (TGV)) on the individual images improves the contrast to noise ratio and hence the quality of the cerebral blood flow maps (Figure 2) compared to existing methods.

Cerebral blood flow map using the standard ASL acquisition and the newly developed implementation. The new method improves the SNR and contrast-to-noise ratio and is more robust against motion.

The impact of the new acquisition and reconstruction method on clinical applications is now being investigated for stroke patients in a joint study with the Department of Neurology of the Medical University of Graz (PI: Christian Enzinger). Figure 3 shows example CBF-maps of three different patients.>

Beside the advantage of detecting cerebrovascular diseases non-invasively, ASL provides important information of perfusion changes coupled to brain metabolism. It is therefore highly suitable for detecting neural activation due to cognitive functions. An example functional activity study, conducted together with psychologists from the University of Graz (PI: Karl Koschutnig), is shown in Figure 4. In this study the subject performs finger tapping in the task period and lies still in the rest period. In the primary motor area (red arrow) and premotor area (blue arrow) an increase in cerebral blood flow is visible during the task condition.

Functional Arterial Spin Labeling experiment. While the subject performed finger tapping, an increase in the cerebral blood flow could be clearly seen in the primary motor cortex area (red arrow) and in the premotor area (blue arrow.

In an ongoing project with psychologists from the University of Graz (PI: Guilherme Wood) this sensitivity for detecting perfusion changes due to cognitive functions is used in a neurofeedback study. In this study individuals try to regulate their activations in the anterior insula by performing emotion imagery.

Further improvement of the method is possible by prospective motion compensation with information fusion from motion tracking sensor and appropriated adaption of the scanning procedure. In sum, this project shows what unexpected progress is possible by combining optimized measurement technology with modern data processing techniques. Interdisciplinary cooperation on a local and international level is an essential component for this type of project.

Stefan M. Spann is a PhD student at the Institute of Medical Engineering. His PhD thesis is dedicated to a non-invasive magnetic resonance imaging technique called Arterial Spin Labeling and is supervised by Rudolf Stollberger.