Herbert Jericha, first head of our institute, deceased  on 5 April 2019 in Vienna. 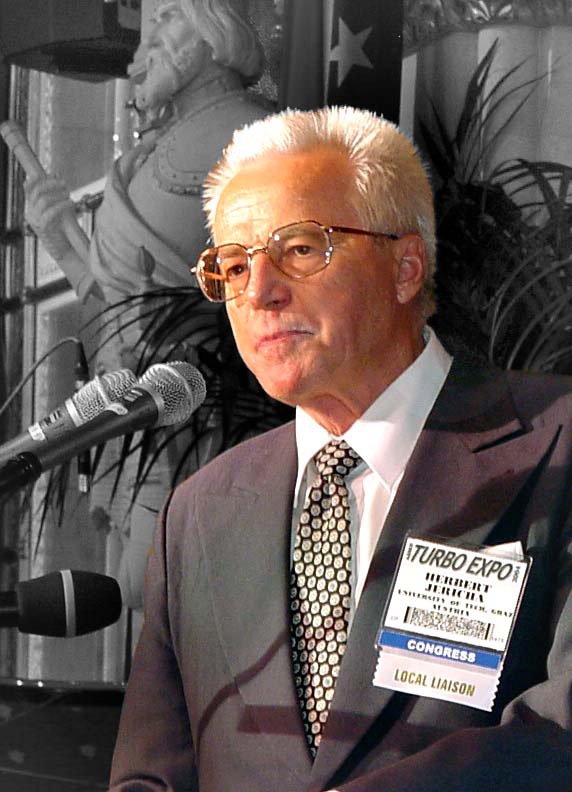 Born 1931 in Vienna, Herbert Jericha studied mechanical engineering at Vienna University of Technology from 1949 to 1954 and became afterwards university assistant at the Institute of Steam and Gas Turbines and Thermal Power plants (head: Prof. Herbert Melan). Parallel to his scientific activities he worked on the organisation of the  Fifth World Power Conference (1958 in Vienna). In 1957 Herbert Jericha received his doctoral degree with excellence with the thesis "Thermodynamic Analysis of Gas Turbine Power Cycles with Free Piston Generators".

He moved then to Ingersoll Rand company in the USA, where he worked as development engineer for radial compressors and steam turbines as well as gas turbines for offgas utilization. In 1960 Herbert Jericha returned to Austria to become head of steam turbine development at ELIN-UNION AG in Weiz. He built up the steam turbine manufacture, developed new calculation methods and test rigs and designed steam turbines, which were sold worldwide. Jericha belonged to the first engineers in Austria working with computers on the solution of technical problems.

In 1969 Herbert Jericha received the "venia legendi" on "Thermal Turbomachinery" from Vienna University of Technology for his work "Stabilization of elastic runners with Two-Wedge Bearings".

In 1970 he was appointed full professor at Graz University of Technology and became head of the new Institute for Thermal Turbomachinery and Machine Dynamics, which he led till his retirement in 1999. During this period the new building of the institute and its experimental facilities were done. A 3 MW compressor station was erected as air supply for all test rigs. A unique transonic test turbine could be taken in operation in 1999.

Herbert Jericha was Dean of the Faculty of Mechanical Engineering from 1980 to 1983.

His scientific working areas comprise steam and gas turbines, machine dynamics of turbomachinery as well as power cycles. Herbert Jericha published more than 100 journal articles, book contributions and conference papers. He was member of the organizing committees of two international conferences held in Vienna, the ASME Cogen Turbo Power 1995 and the ASME Turbo Expo 2004 with more than 4000 participants.

Herbert Jericha recognised very early that the anthropogenic emissions of CO2 threaten the world climate and tried to provide alternatives with his works on the Graz Cycle, hydrogen combustion, solar and wind energy. Especially the Graz Cycle, a fossil fuelled power plant with CO2 capture, contributed to his world wide recognition. In 2010 he received the R. Tom Sawyer Award of the International Gas Turbine Institute (IGTI) of the American Society of Mechanical Engineers (ASME) for his lifework and his works on the Graz Cycle.

General Electric, the world's greatest gas turbine manufacturer, is one of our industry partners.

A reportage from the GE Aviation center of excellence in Munich, Germany, active in the development of innovative technologies for aero engines and digital solutions for aviation industry, was published including interviews to the leaders and the collaborating team at Graz University of Technology.

Michael Landl provided a Wiki version of the famous textbooks on aeroengine safety by Axel Rossmann, who has been cooperating with our institute for many years. The textbooks cover a wide range of safety problems in aircraft and aeroengines and are in wide use in aeroengine industry.

The video below shows the start-up of a JetCat P60-SE model gas turbine fired with kerosene at our institute. The turbine has an exhaust speed of 1418 km/h, a trust power output of 12.4 kW, a trust performance of 63 N and has a maximum revolution speed of 165,000 rpm.

The model is tested within the project Hy4Jetengine and will be fired also with methane and hydrogen. The setup, commissioning and start-up has been done by Dr. Johannes Peterleithner and Dipl.-Ing. Felix Greiffenhagen under the supervision of Prof. Jakob Woisetschläger.

The Austrian Research Promotion Agency documented the results of two of our research projects within the Aeronautics Research and Technology Programme TAKE-OFF by video clips.

SEIKON3D dealt with the three-dimensional optimization of contoured side walls in jet engines, whereas LP-Inject worked on the efficiency improvement of axial turbo machines by passive flow injection.