Cryptographer with a penchant for crayons

Cryptographer Maria Eichlseder hides our messages from curious eyes that shouldn’t read them. With her love of paper she defies the classical image of a computer scientist. 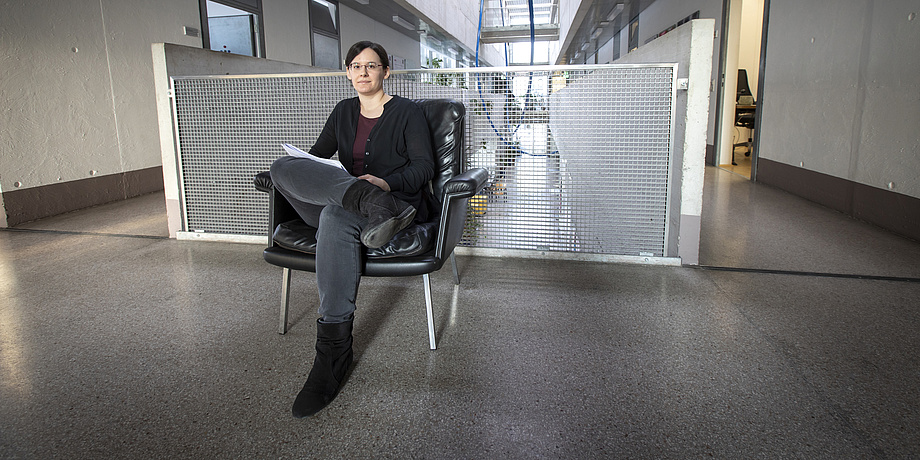 Also happy to be off-line: The researcher often works on paper and doodles on her printouts with crayon.

The sun shines through the long roof window on the second floor of Inffeldgasse 16. It touches the concrete wall, makes the silver railings shine, and replenishes the large-leafed potted plants with energy. Maria Eichlseder emerges from one of the many silver office doors and walks towards the coffee kitchen. ‘I share my office with one colleague. It’s quieter here,’ she says and is immediately interrupted by the clattering of the coffee maker reducing the beans to a fine powder. Even if the yellow couch in the coffee kitchen is cosier, the 30-year-old first talks about her office. Because there is something special about it – a particularly promising atmosphere: In 2018 the researcher completed her doctoral thesis – sub auspiciis. Just like her two predecessors who used her office before. Sub auspiciis doesn’t only mean completing the degree programme with the best possible grades, but also passing all the upper-school classes and the school leaving examinations with distinction.

Meanwhile the coffee maker has calmed down. Steaming fresh coffee is poured into a cup. On the other side of the kitchen, a whiteboard gleams in the sunlight. It’s completely covered with numbers, sequences of letters and formulae. Even coffee breaks command no due respect from brilliant ideas. On a small uncovered area Maria Eichlseder sketches a diagram explaining her work. 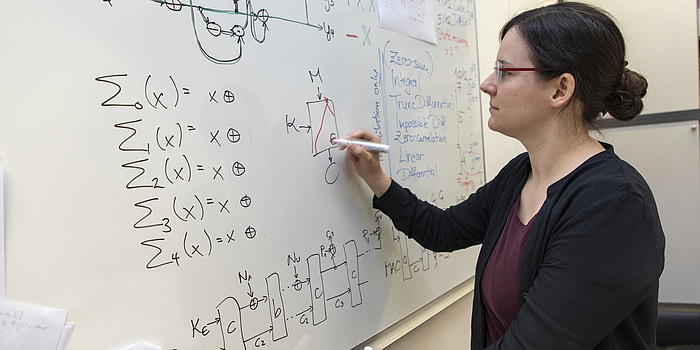 This is how encryption works: we make a box, stick a message in it at the top, place a secret key in it and shake vigorously. Out of the box comes the encrypted unreadable message – the ciphertext. Looks simple, but it isn’t.

‘I want to be able to transmit messages in such a way that nobody can read or change them on their journey,’ says Eichlseder, explaining the basic idea of her work at TU Graz’s Institute of Applied Information Processing and Communications. To do this she uses an authenticated encryption method. On the one hand, it ensures that the message is transmitted in a way that is unreadable and immune to modifications. On the other, it allows it to be checked and confirmed.

The sketch of the box symbolises the algorithm – the cipher – which researchers write and which contains the instructions of what should happen to the message. This kind of encryption is called symmetric encryption – a secret key is necessary both for encrypting and decrypting the message. The key is a small piece of information which completes the algorithm.

I want to be able to transmit messages in such a way that nobody can read or change them on their journey.

To ensure that the encryption process is absolutely secure and reliable, the international research community often works for many years first on the design and later on the analysis of new algorithms. ‘There is a saying: any person can create an algorithm which they can’t break into,’ reveals Eichlseder. ‘That’s why it’s important to let other people with new ideas and different perspectives loose on your own work.’ The means to this end are long international competitions. For example, together with her colleagues, Eichlseder developed an algorithm in 2014 which works in a very robust way particularly on CPUs with reduced computing capabilities and which is especially relevant for smart objects and Industry 4.0. The algorithm is doing well and is meanwhile among the finalists of the CAESAR challenge. Ideally the competition results in a new encryption standard.

In addition to designing new algorithms, Eichlseder specialises in analysing existing algorithms. ‘What interests me is whether the cipher text (NB: secret text) discloses statistical information by which hackers can decrypt the message,’ explains Eichlseder. These could be, for instance, frequently occurring characters or even the time frame that the algorithm needs to encrypt a particular message.

Armed with crayons, work is easier

With a cup of freshly brewed coffee in her hand, the researcher ambles back into her office, past the open office door, behind which Daniel Gruss, Moritz Lipp and Michael Schwarz are hard at work. At the beginning of 2018, the three researchers together with their doctoral thesis supervisor, Stefan Mangard, discovered the security loopholes Meltdown and Spectre and made international headlines for weeks.

The desk of the computer scientist in the private office reveals something unexpected: stacks of printed sheets of paper and a silver basket full of green, red, pink, yellow, magenta, black, orange blue and brown crayons. She likes to work on paper, explaining: ‘In this way I can spread myself and my ideas out better. Work on the computer is very linear.’ She also reads the research work of her colleagues on paper printouts. She usually sits in a rather old, leather chair which for this very reason is extremely comfortable and has provided good service to her office forebears. ‘Sometimes I also read at home – it’s much easier with the cat on my lap,’ she explains with a smile. 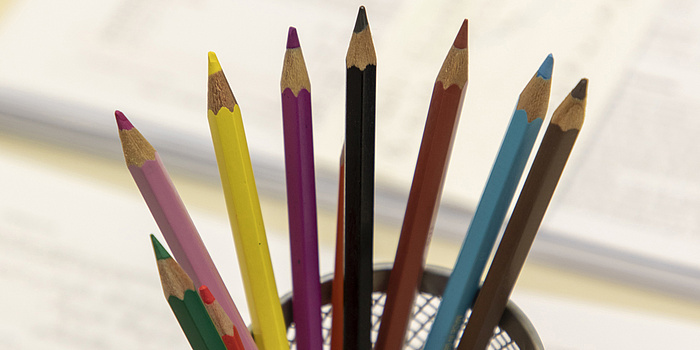 Pencils as colourful as a bunch of flowers in spring: When she’s developing theories, sketching her ideas or carrying out proofs, Maria Eichlseder prefers to use paper.

Eichlseder has got ample reading material. Cryptography is a lively research area producing countless publications. One reason for the high number of publications is the way things are published in this field: ‘If I find a security loophole, I want to communicate it immediately. I don’t want to send it to a publishing house and publish it after long delays. It’s normal in the community to share time-sensitive discoveries on the online platform Cryptology ePrint Archive beforehand and publish in journals later. In this way I make my results useful for others directly. ’

A bolt from the blue

The presence of her basket of crayons on a desk at TU Graz was not always foreseeable. At school, Eichlseder was interested in languages, and wanted to learn linguistics. When she was 17 she experienced the metaphorical bolt from the blue. ‘In those days I heard about asymmetric encryption (public key cryptography) for the first time and from the first moment I was completely fascinated.’ In contrast to symmetric encryption, which was described earlier, asymmetric encryption makes use of a two-part key. One part of the key is publicly known and visible to everybody. Any number of senders can use this part in order to make a message unreadable. The second part of the key is only known to the receiver. Only this part can enable the message to be read in clear text. ‘For me this was so incredibly illogical that I just had to grapple with it further. The more I immersed myself in this world, the more I recognised how important it is. It is very deep and it’s got substance.’ 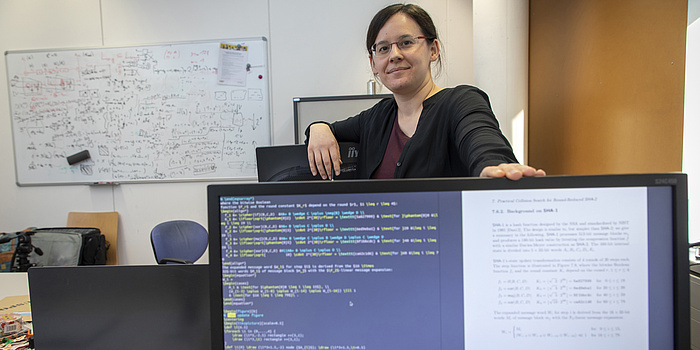 Today it’s routine: At the beginning of her studies, Maria Eichlseder had done very little coding. But she didn’t let that distract her. Soon she got to love it.

‘The fact that my mother is a physicist and my father a internal-combustion-engine researcher didn’t do any harm. Both were examples to me of how much fun natural science and technology can be,’ she explains. Despite lacking in coding skills from school she enrolled in two bachelor’s degree in mathematics and computer science. ‘Although programming was completely new territory for me, it was fun from the very first semester and I was able to learn quickly.’ Nor did she allow herself to be affected by the fact that as a woman she was in the minority in her branch of studies: ‘You have to get used to sometimes being the only woman in the room. But this didn’t make it more difficult for me,’ she smiles. She has nevertheless remained loyal to her love of languages – to ‘compensate’, in addition to her studies, she was learning Arabic, Chinese and Russian.

‘My future is in academic research’

Meanwhile the coffee cup is empty again. It is still unsure whether the coffee maker in the institute kitchen will continue to make coffee for Maria Eichlseder. But: ‘I would like to stay in Graz if that is at all possible. But wherever I’ll go, I see my future in academic research.’