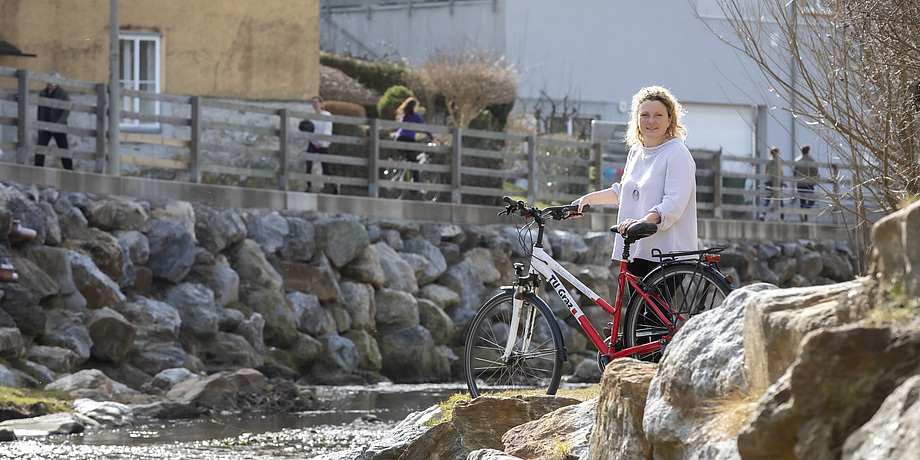 Aglaée Degros' office is large, bright and thrives on a central conference table. The table is filled with stacks of books, handmade newspapers and print-outs of graphics. There is just enough room for a laptop and two cups of coffee. The desk of the head of the Institute of Urbanism is inconspicuously placed between the floor-to-ceiling casement windows on the rear wall of the room. There is a laptop on it and even more books. The most eye-catching thing is what hangs above the desk: a yellowed map entitled "Bebauungsplan von Graz” (land-use plan of Graz) of 1926 takes up the entire length of the wall of the old building. It is old and beautiful.

On both side walls of the room, glass doors grant a view into the adjacent rooms. Personnel are constantly entering the office through one door and leaving through the other. Is this a connecting room? It would fit Aglaée Degros, whose research focuses on communal spaces in urban areas.

On water, mobility and nature

"I organize the city," Degros explains with a smile on her lips. "You can think of a city as a collection of buildings, but you can also think of it as a network of spaces that lie between the buildings. Water, nature and mobility.” The current problem with this is that these spaces are primarily used for vehicular traffic and, in Degros' eyes, should be redistributed. After all, if nothing else, the increased frequency of working from home due to the corona pandemic has rekindled in people a desire for more nature and more communally usable spaces in their nearby living environments. "People want nature back. As the past year has gone on, people’s homes have felt smaller and smaller."

I organize the city.

The topic of sustainability plays a central role in Degros' considerations. She sees great opportunities in the reintegration of nature into cities. "Residential densification is very sustainable and will continue to be pushed in the future. In many cases, however, the quality of public space has been forgotten." For example, the many sealed surfaces in urban areas intensify heat development in cities. Natural cooling can be provided by trees, meadows and parks, for one thing. But clever architecture can also be a solution here and bring about natural ventilation; for example, through so-called "urban canyons" – the narrow gullies between buildings.

The corona pandemic has substantially changed the world of work. Many have realized or had to realize that it is also possible to work very well from home. Something which could have far-reaching consequences in urban development, as Aglaée Degros explains: "I think people will work more from home in the future as well. This makes those rural towns and communities that have long struggled with out-migration attractive again. For example, I can live in Trofaiach, work online and only travel to the office in Graz once or twice a week." The prerequisite for this is that the already very depleted rural and small-town infrastructure is reactivated: "This is not a problem with schools or kindergartens. The situation becomes more difficult when it comes to cost-intensive infrastructure. For example, if there's no train station, it's going to be hard to make a place more attractive." Because, according to Degros, this variant only works if the connection of the places is realized less via car traffic and more via sustainable mobility concepts such as rail.

You can think of a city as a collection of buildings, but you can also think of it as a network of spaces that lie between the buildings. Water, nature and mobility.

Research distinguishes three ways in which cities function. First, there is the classic metropolis, as Graz is. However, such a large city also means that smaller communities in the vicinity – such as in upper and southeastern Styria – are starved out in favour of the city’s affluent suburbs. Another variant is shown with Vienna and Wiener Neustadt: a large city with satellite towns that are well connected by public transport. And the third variant was implemented in Vorarlberg, where the three smaller cities of Dornbirn, Bregenz and Feldkirch are strongly networked and well connected via sustainable means of transport. "I personally think that this model is not sufficiently valorised," Degros explains. “It allows the resources of each town to be used effectively." Of course, this variant is also only viable for the future if mobility between the towns can be organized sustainably.

The lack of a local supply structure is not only a problem in small towns or rural areas. “In particular during the lockdown, you could clearly see that while mobility to the workplace dropped significantly, it shifted to a different area," Degros said. "People have been driving to the supermarket or bakery because there is a lack of such places in the immediate vicinity."

This problem is not only evident in Austria, but also in Brussels, for example. As part of the scientific advisory board for the regional development of the Belgian capital, Degros is drawing up proposals for the reconstruction of this infrastructure. Likewise, the researcher is engaged with project leader Eva Schwab and her research team in smaller, Styrian towns, where she develops concepts together with the people living there to make these places attractive and lively again.

Mobility and quality of life

An important point for the quality of life and thus for the attractiveness of a place of residence is, of course, the mobility concept. Degros and Vienna University of Technology (TU Wien) are currently working on this in Villach, among other places. Under the heading of "tactical mobility," several concepts will be tested and evaluated there in a live trial in the coming months. "We're starting with a pop-up cycle path that will be set up for a month. If it has a positive impact on traffic in the area, then it could stay. From all the planned experiments, we will then derive long-term proposals at the end."

In addition, as part of the Urban MoVe (mobility contract) project, the researchers completed the development of a mobility contract together with TU Wien to ensure the mobility mix in newly built residential buildings. "In apartment buildings, there are often several cars per apartment – which then requires big, cost-intensive garages," says Degros, explaining the background. To change this, the mobility contract will be used to determine how an attractive mix of nearby tramway stops, car-sharing services and bicycle parking will be incorporated into the building concept. "Especially in Vienna and in some buildings in Graz, there are already very interesting projects about this."

Vision for Luxembourg: An international research team is currently dedicating itself to an extensive project: a future vision for a carbon neutral Luxembourg. Degros is also part of it. "This project is so appealing because we are developing a concept for an entire country."

Living with a community garden

At an every day level, Aglaée Degros deals with how people live. But how does the native Belgian live herself? In an urban old building with a community garden in the courtyard. "I love the contrast between very rural and very urban life in Graz. I live only 15 minutes away from TU Graz," she says with a smile. "I don't have a garden myself, but our whole house uses the courtyard for barbecues in the summer, for example. We’re very well organized." By the way, she doesn't own a car herself, but likes to use her bicycle and the car-sharing service offered by TU Graz. "I find sharing resources much more interesting than owning things."