René Rieberer: „I’m just interested in everything about it.“

René Rieberer has been a researcher at TU Graz since 1996 and is involved in environmentally friendly heating technology. But it’s not just in research that everything revolves around this; he also monitors his private Heating and ventilation system with all kinds of measurement technology. 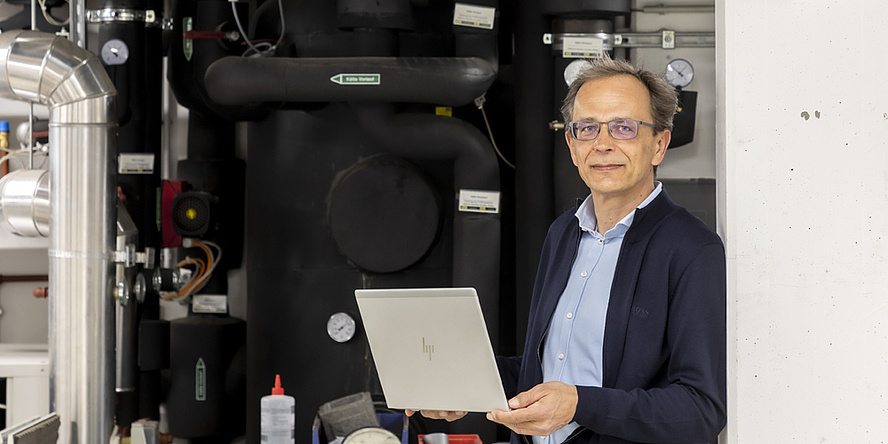 René Rieberer in the thermal engineering laboratory at TU Graz.

You hear René Rieberer before you see him. He runs down the stairs at 25b Inffeldgasse, taking several steps at a time. Fast, but without stress, as written in his relaxed face. His office is at the top of the stairs. At the bottom is the thermal engineering lab, where he spends a lot of (research) time. He walks along the large climate chambers in which he can create different climatic conditions – from a frosty minus 20°C to high-summer plus 40°C. For example, combined heat pump-refrigeration systems for trains are tested which have to prove their cooling and heating strength.

Rieberer takes the next set of steps – and again we go down one more level on steel-grid stairs. The basement of the laboratory is built the same way as the hall upstairs in terms of floor plan, but it is much lower. Silver pipes winding along its deep ceiling carry cool and warm water. The thick pipes covered with black foam, on the other hand, should remain in their dark packaging – they conduct ice-cold water through the room. Rieberer wanders over to a silver box fed by green pipes – a thermally driven absorption refrigeration system. “Industrial applications are a big trend in thermal technology,” he tells us. “With this plant, for example, we are testing how industrial waste heat can be used efficiently to generate cold.”

Leaning against a shimmering green wooden worktable, he talks about his current research. “In addition to systems for industry, we are currently for example also working on mobile applications for e-cars. It’s a completely different world on the mechanical engineering side, even if the thermodynamics behind it are the same.” Above all, these plants have to be small, efficient and cost-effective. “If money was no object, it would be easy. But then it would also be much less interesting,” he says and the right corner of his mouth betrays a small smile.

Previously, Rieberer was also involved in activities for the Werner Hochegger Research Foundation, where he shaped the research line as chairman of its steering board. The foundation was established in 2011 by entrepreneur Werner Hochegger to provide financial support for scientific work in the field of environmentally friendly heating technology. The foundation has funded several diploma and doctoral students in the last ten years. The findings were primarily implemented in the almost 900-year-old Rabenstein Castle in Frohnleiten, Styria, which Hochegger revitalized. “There was already extensive heat pump system in the castle, which is unique in an historic building. But no one knew how efficiently it was working,” Rieberer recounts of the early days. “We looked at it metrologically and compared it to a lot of simulations. One important question, for instance, was how to deal with infrequently used rooms in terms of heating.” The researchers focused on the comfort factor in the impressive building, which is now used for events, conferences and weddings: “Different people have different temperature needs. Objective data is difficult to generate. For example, the air temperature may be optimal, but the room still seems cold because the walls have not properly warmed up yet.”

Even at home, the Upper Styrian native can’t let work be work. Rieberer is monitoring his own heating system with expansive measurement technology consumption and efficiency of the heating system. “I specifically chose a house that already had a heat pump and then expanded that to include a ventilation and a photovoltaic system.” It is not surprising, then, that the researcher summarizes his path to applied thermodynamics succinctly: “I’m just interested in everything about it. And the rest I just grew into.”