Why Some Bubbles Move Faster

Why do large gas bubbles in viscoelastic liquids (such as polymer and protein solutions) rise so much faster than expected? An open question with great relevance for industrial production processes. Researchers at TU Graz and TU Darmstadt have now found an explanation. 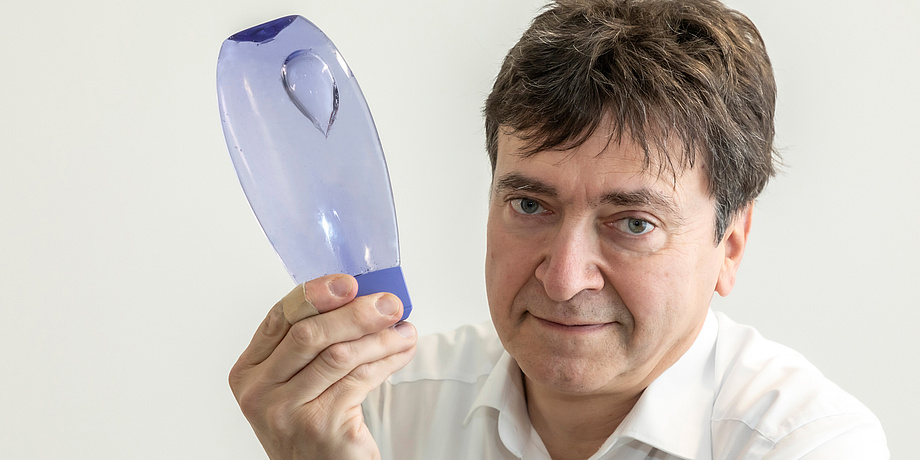 Günter Brenn investigates the behaviour of gas bubbles and liquid drops at the Institute of Fluid Mechanics and Heat Transfer at TU Graz. © Lunghammer - TU Graz

It is a puzzle long known among experts and very relevant in many industrial production processes: a jump discontinuity in the rise velocity of gas bubbles in so-called viscoelastic fluids. Viscoelastic fluids are substances that combine characteristics of liquid and elastic substances. Many hair shampoos are an example of this. If you turn a transparent, almost completely filled bottle of shampoo upside down, you will see the enclosed air rising as a bubble in an unusual shape. In many industrial processes, such liquids occur as solutions of polymers and often have to be enriched with oxygen by gassing. “We have known for about 60 years that the rise velocity of gas bubbles in viscoelastic liquids undergoes a jump at a critical bubble diameter. The speed of the bubbles can then suddenly become up to ten times faster. This plays a fundamental role in the controlled gassing of these liquids. At the same time, it was unclear what was causing this sudden increase in velocity,” explains Günter Brenn from the Institute of Fluid Mechanics and Heat Transfer at TU Graz.

With a combination of simulation, experiment and theoretical analysis, the teams of Günter Brenn at TU Graz and Dieter Bothe at TU Darmstadt have now solved the puzzle together. They’ve found that the interaction of the polymer molecules with the flow around the gas bubbles leads to the bubbles’ strange velocity behaviour. With this knowledge, the oxygen input into these solutions can now be predicted more accurately, which means that equipment in biotechnology, process engineering and the pharmaceutical industry, for example, can be better designed. The researchers currently explain their findings in the Journal of Non-Newtonian Fluid Mechanics.

Polymers often consist of huge molecules that interact in complex ways with the liquid in which they are dissolved. This interaction makes a liquid viscoelastic. What causes the jump in velocity that gas bubbles display in these liquids from the critical diameter onwards? Günter Brenn explains the latest findings: “The flow around the bubble causes the dissolved polymer molecules to stretch. The molecules do not particularly like this state. They want to return to the relaxed, unstretched state as soon as possible.” If this return to the relaxed state is faster than the transport of the molecules to the equator of the bubble, then the bubble remains slow. If, on the other hand, the return to the relaxed state takes longer than the journey to the bubbles’s equator, then a tension is released in the fluid that “pushes” the bubble. This leads to a self-amplification, since subsequent polymer molecules position themselves below the equator and relax, unloading their elastic energy, releasing a “propulsive force".

In addition to the high practical relevance of this finding, especially for the above-mentioned areas of application, there are also consequences in basic research. “It turned out that another surprising property of the flow field of these solutions can be assigned to this molecular mechanism we showed: namely, the so-called ‘negative wake’ of the gas bubble,” says Dieter Bothe from the Analysis working group of the Department of Mathematics at TU Darmstadt. This is an area in the flow field below the bubble where the fluid normally “follows” the bubble at a low velocity. With polymeric liquids, however, it is the other way round: there, the movement of the liquid is oriented in the opposite direction to the movement of the bubble. This fluid movement is caused by the same tension that “pushes” the bubble. This understanding can lead to possibilities for controlling flow processes.

This research area is anchored in the Field of Expertise “Human & Biotechnology” , one of the five strategic research areas of TU Graz. 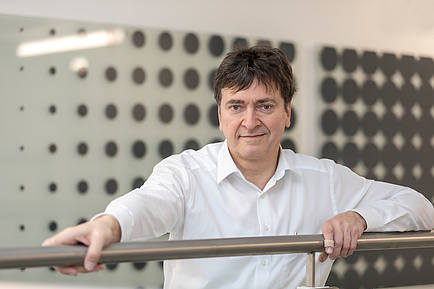 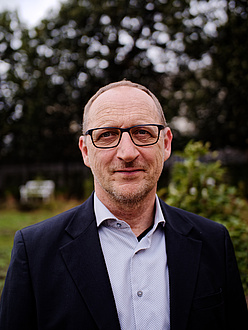 Dieter Bothe, researcher of the Analysis Group of the Department of Mathematics at TU Darmstadt. © Sebastian Keuth 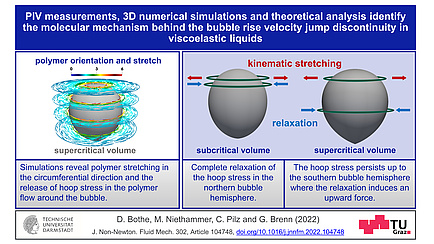 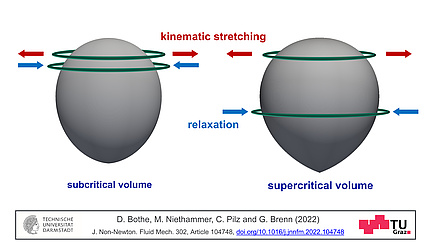 Schematic representation of two rising bubbles in a viscoelastic fluid, on the left in the subcritical state and on the right in the supercritical state. Image: Matthias Niethammer – TU Darmstadt