Forest fires, floods, falling rocks and other natural disasters are increasingly causing damage to built structures and, in the worst case, to people. TU Graz researchers are trying to help.

Whether by means of rescue robots, autonomous drones or in securing structures, TU Graz researchers are involved in emergency management and disaster relief in a variety of ways. In addition to numerous research projects, this is also done in Austria’s first volunteer university fire brigade, or within the framework of the Disaster Competence Network Austria (DCNA), a competence network for security and disaster research, which was launched by Graz University of Technology (TU Graz) together with the University of Natural Resources and Applied Life Sciences, Vienna, and which emergency organizations as well as university and non-university research institutions have now joined.

In 2018, the first volunteer research fire brigade was founded at TU Graz. The members are staff, students, teachers and alumni of TU Graz and are involved in innovative technologies to support rescue workers and knowledge transfer. “We don’t have fire engines nor are we involved in fire-fighting missions. Our focus is on research and its practical application in fire-fighting,” explains Harald Kainz, Rector of TU Graz and also research fire brigade chief at TU Graz. In this way, the fire brigade acts as a mediator between the fire service and research. The first research projects have already been implemented. 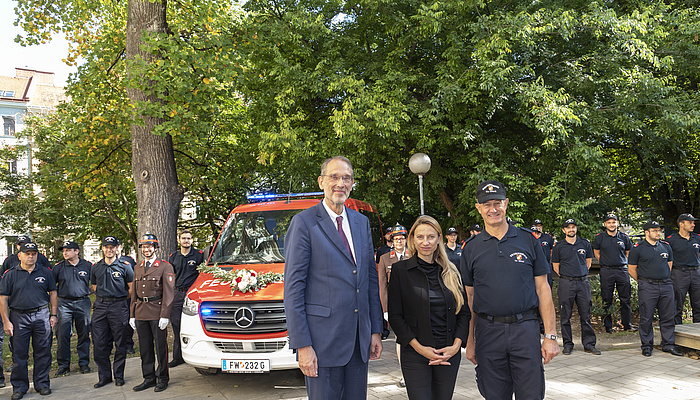 The new research fire-fighting personnel carrier was inducted at TU Graz in the presence of political VIPs. © Lunghammer – TU Graz

The Austria-wide network in the field of disaster research, which is based at TU Graz, sees itself primarily as an interface between science and practice, as DCNA director Christian Resch explains: “Our staff – like myself – are usually involved in an emergency service themselves, so they know their needs very well.” Various inter-university projects in different working groups are dedicated to flood prevention, drones in rescue operations and autonomous robots that can take over transport, rescue or fire-fighting work.

TU Graz researcher Gerald Steinbauer-Wagner, robotics scientist at the Institute of Software Technology, is involved in various projects at the DCNA. Together with his team, he is working with an autonomous transport platform that can independently take on various transport tasks and has already been successfully tested several times – including at the Seetal Alps military training area and during the Austrian Space Forum’s analogue Mars missions, most recently in the Negev desert in Israel. “Our cooperation with the Institute of Geodesy at TU Graz is currently very interesting. The team is supporting us with the satellite-based navigation of the robot. This is essential for the navigation of the transport platform – in addition to the precise analysis of the surrounding by different sensors and data material fed in beforehand.”

Together with the University of Leoben and fire brigade associations, the Institute is also testing robots that can, for example, remove hazardous materials after a tunnel accident or gather information if the mission is too time-critical or too dangerous for human assistance. In the Easier project, the team is working with the well-known fire-brigade supplier Rosenbauer and with psychologists from the University of Graz on the cooperation between humans and robots. The aim is to build trust between the two, because “trust is essential for effective cooperation”, says Steinbauer-Wagnerac, who, in addition to the DCNA, is also involved in the TU Graz volunteer fire brigade. Together with students, he designs training opportunities for fire-fighters who want to specialize in handling rescue robots.

Video: How does an autonomous transport vehicle drive?

Aerial manoeuvres against disasters of all kinds

In addition to ground-based robots, drones can also be used for rescue missions. At the Institute of Computer Graphics and Vision at TU Graz, researchers led by Professor Friedrich Fraundorfer are improving their algorithms and sensor technology, among other things. But above all making the drones easier to handle, as Fraundorfer tells us: “In some projects, we’ve seen that drones are very well suited for joint use with fire brigades. But it’s necessary to have very well trained pilots who can fly such complex missions. If we automate more, then drones will certainly be used more frequently and could provide crucial assistance.”

For example, the researchers equipped a drone with thermal imaging cameras that could detect people in completely smoke-filled rooms who could not be seen from the outside. In another project, the team obtained data from drone images that allowed conclusions to be drawn about further fire development in forest areas.

Video: How can drones see?

Precautions to prevent disasters from happening in the first place

In addition to technologies that are used for rescue in the event of a disaster, researchers at TU Graz are interested in preventing disasters.

“In civil engineering, we are of course always working on designing and constructing our buildings to withstand disasters,” explains Gerald Zenz, head of the Institute of Hydraulic Engineering and Water Resources Management. “For example, we test new buildings for their response to heavy rain, earthquakes and other natural disasters. And we simulate how already existing structures react in an emergency.” The experiments are carried out in the hydraulic engineering laboratory at TU Graz. There, various water structures are recreated in miniature under realistic conditions. “Among other things, we are testing the hydroelectric functions of power plants. These plants are also built to resist flood disaster and earthquakes.”

On the other hand, the Institute is committed to improving flood forecasting by using satellite data and research in the field of land management in order to reduce the surface runoff.” Another very important aspect is public awareness in case of flooding. “People still die because they want to quickly save possessions from basements during floods,” says Zenz, stressing why targeted information is so important. In the EFFORS project, the research team, together with the Central Institute for Metrology and Geodynamics (ZAMG), want to improve flood forecasts, which work wonderfully in large areas, for smaller catchment areas. “In smaller areas, there are still many false alarms. This undermines confidence in predictions, which are, however, very important for short-term protective measures,” says Zenz. “We’ve been able to achieve very good results here in the greater Graz area and pilot projects at the Mürz, Kainach and Saalach.”

When slopes or embankments collapse

At the Institute of Soil Mechanics, Foundation Engineering and Computational Geotechnics, flooding is also a topic. However, from a different perspective, as Institute head Roman Marte explains: “For example, we investigate whether slopes around retention areas or reservoirs are unstable and whether a possible landslide could lead to flooding.” In addition to slopes in the area of power plant reservoirs, housing development areas and infrastructure facilities on or in the area of influence of landslides are also objects of consideration.

Minimizing the risk of falling rocks

The Institute of Rock Mechanics and Tunnelling is primarily interested in the safe construction and durability of tunnel structures. For example, researchers are using machine learning and data mining to facilitate the transition from subjective decisions and mostly manual activities to data-driven decision-making and automated processes in tunnelling. “Fewer and fewer people want to work in dangerous underground mining,” explains Institute head Thomas Marcher. “This is where autonomous machines are a valuable solution.”

In addition to tunnel construction, the STEIRIS project is primarily interested in the risk of falling rocks on communal paths (for example hiking trails). Or rather, it is working to reduce it. “Just recently we looked at a cliff where there had been a rockfall event. We knew it was relatively safe. But hikers followed behind us and also stopped at this spot, not knowing whether it was safe or not,” says Marcher’s institute colleague Alexander Kluckner about his research. Kluckner, with the cross-institute and cross-university team, would like above all to provide communities with the necessary knowledge about falling rocks on hiking trails to enable them to make a scientifically sound and independent assessment of the situation and act accordingly. “We are also working with a regional development agency to raise awareness and launch information campaigns for recreational athletes. And we are looking at the very important legal aspect, so that a clear separation of responsibilities of users and local authorities is possible.” 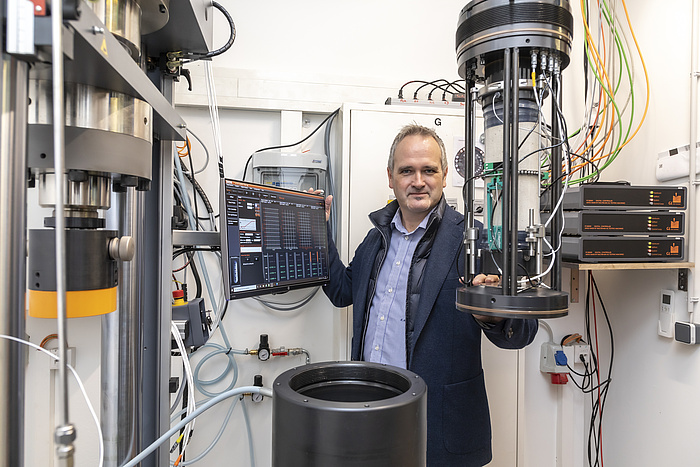 Thomas Marcher in the laboratory of the Institute of Rock Mechanics and Tunnelling. © Lunghammer – TU Graz

In the field of emergency management, the Institute of Geodesy is dedicated to both prevention and the support of rescue operations.

Among other things, observations of permafrost soils or their changes due to climate change contribute to prevention. “Permafrost is frozen ground. When it thaws, the ground becomes unstable and mass movements can occur,” explains Institute head Mathias Schardt, which can lead to serious problems in an emergency. This is because the research team provides the meaningful basic data for mudslide and landslide assessments that the authorities have to adopt. “Since the 1990s, the Institute has been conducting long-term monitoring under the direction of Viktor Kaufmann, which documents precise changes over the years and makes forecasts possible.”

In addition to the important prevention work, the Institute supports the emergency services in the event of a disaster – with customized navigation solutions. “We use satellite images to classify the terrain and provide rescue teams in alpine areas with the fastest and most traversable routes to people who have had accidents,” explains Schardt. A uniform grid is laid over the images and each square is assessed. “We have classes from one to five. One is given to areas that can be crossed easily – for example, a meadow. Five is an area that is impassable for rescue teams – such as a rock face.” In this way, the team simulates an easily accessible, but fast and short path in the terrain.

With their work, the researchers at TU Graz are making our lives a little safer, step by step and project by project.