She investigates black-box-systems, while he predicts the state of networked systems. Andrea Pferscher and Markus Tranninger are two of 11 young researchers in the TU Graz project "Dependable Things". 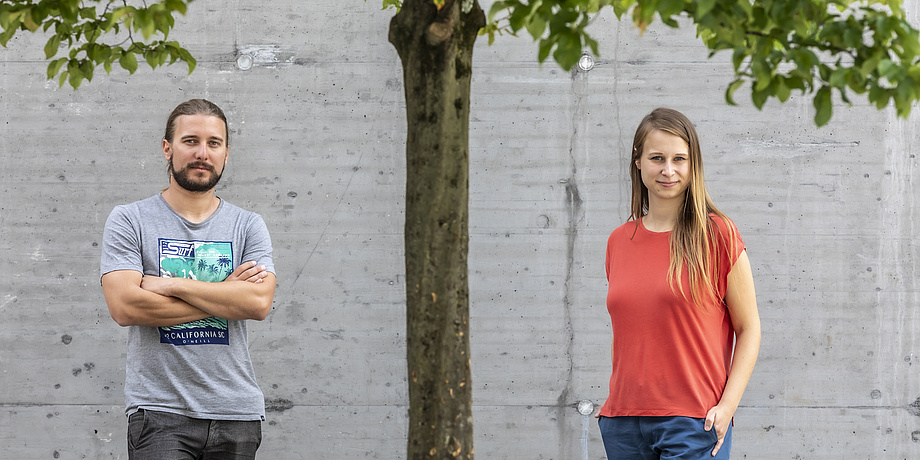 Eleven young researchers are working as doctoral students or post-docs in the TU Graz lead project "Dependable Internet of Things in Adverse Environments” – “Dependable Things” for short. The six-year project aims to make our increasingly networked world safer and more reliable. To this end, it examines the individual smart objects in the Internet of Things under harsh environmental conditions and then develops them further.

From "Hello world" to analysis of artificial intelligence.

"It must have been a simple 'Hello world'", says software engineer Andrea Pferscher, recalling her first programming attempts. And what began with two short words has developed into a passion for the woman from Styria with an analytical nature. In the working group of Bernhard Aichernig, she is currently engaged in the verification and testing of complex software products. "It has always bothered me that there are thousands of errors in every piece of software code and that there is no automatic, efficient way to trace and eliminate them," she says today about the beginning of her studies. So she set out to solve the problem herself.

"It is very difficult to test a system whose internal workings you have no knowledge of," she says, explaining her work in terms of so-called black-box systems. "With such systems I cannot 'look into the code' but have to find other ways to check them." Researchers today like to use models for testing software. Pferscher is now breaking new ground in black-box systems.

It has always bothered me that there are thousands of errors in every piece of software code and that there is no automatic, efficient way to trace and eliminate them.

She combines genetic programming with active learning in order to “learn about" a system – i.e. to find out how a system works by asking questions and making comparisons without having to see the code. "In my case, I also want to investigate systems that are dependent on time – that is, that have additional complexity. For example a tactile sensor that reacts differently depending on how long it is touched," explains Pferscher. "We create several timed automata which then compare themselves independently with the system under test.  Automata that perform particularly well in comparison with the system under test are carried over into the next generation and continue testing. This continues until what remains is the test system that corresponds to the system under test." A principle of evolution.

In the end, an institute no less than the US space agency NASA expressed interest in her first paper on this topic and the young researcher was able to present her work at the organisation's annual – this time virtual – conference in mid-May. "That was of course amazing – to achieve success with the first paper right away," beams the researcher.

Markus Tranninger has also set himself the goal of making the Internet of Things more reliable. He was able to complete his doctoral studies in spring 2020 and has been working on the project as a post-doc ever since. His focus is on complex, dynamic systems and their respective states. "In complex and above all autonomous systems, it is essential to always have a precise knowledge of the respective system state," he explains. "An autonomous vehicle in a complex traffic system must know at all times, for example, where other road users are and where they are going." The sensors installed are responsible for measuring the current state – Markus Tranninger's approach is responsible for predicting the future state. "For the state estimations, we combine the current data from the sensors with mathematical models of the situation and can therefore say what state the system will soon be in."

In complex and above all autonomous systems, it is essential to always have a precise knowledge of the respective system state.

The topic of his doctoral thesis was to develop efficient algorithms for estimating the system state. "Conventional methods fail in complex systems due to the high memory requirements and computational effort. However, especially in the Internet of Things, resource consumption must be minimized." In the lead project, he will further develop this approach and wants to find out how data and models allow conclusions to be drawn about errors in the non-visible system.

The TU Graz lead project "Dependable Internet of Things in Adverse Environments" has been extended and will run until 2022.

By way of the funding track "Lead Projects", TU Graz supports oustanding, interdisciplinary, internal research projects that have been analysed and approved in an independent, competitive procedure. The first funded project "Dependable Things" dealt with the possibilities of making the Internet of Things more reliable. Two other lead projects are currently underway: "Porous Materials@Work" and "Aortic Dissections".