More Dependability in the Internet of things

Tens of millions of mini-computers now populate our planet – built into everyday objects, among other things. Their reliability is still an issue – one to which TU Graz is dedicated to pursuing. 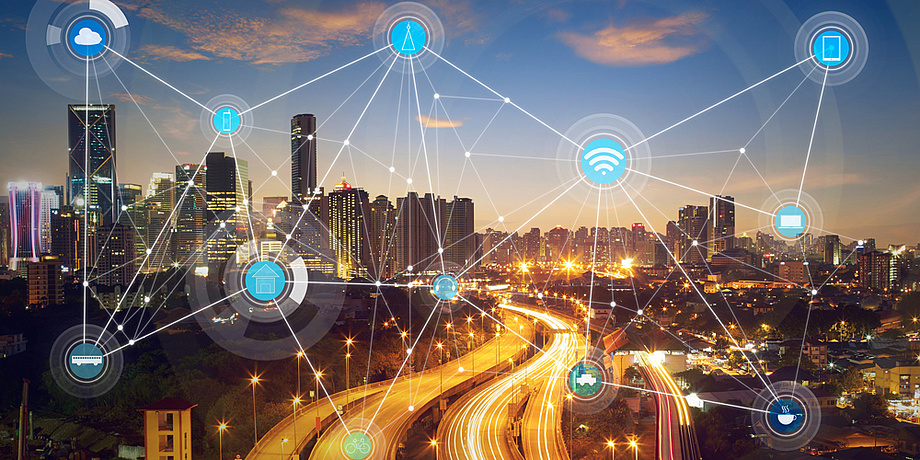 Millions of smart objects work together on the Internet of Things. Security is important. Source: James Theo Hart, Fotolia.com

“Smart applications are already an integral part of our everyday lives and are embedded in everyday objects such as mobile phones, smart watches and smart electricity meters. But they are also used in critical areas such as vehicles, hospitals and industrial plants,” explains Kay Römer, a researcher at TU Graz. “The security of smart things and networked systems is an important topic, but it has not yet been comprehensively solved. Above all, we currently lack safety and reliability guarantees.” This population of our everyday lives with mini-computers communicating with each other is called the Internet of Things (IoT). The focus of Kay Römer’s scientific attention over the past six years has been to ensure that the Internet of Things works reliably and is secure. Since the beginning of 2016, he has been leading the first TU Graz lead project: “Dependable Internet of Things in Adverse Environments”. “Smart devices can be exposed to very harsh and adverse conditions. This can be, for example, solar radiation that heats up the chips, or radio interference that hinders data exchange and positioning.”

TU Graz has been funding interdisciplinary cutting-edge research projects on highly relevant social topics since 2016. “Dependable Internet of Things” is the first project to be completed by December 2022. The projects go through a competitive selection process carried out by an international jury of experts. Initially, the projects are funded for three years. After a successful interim evaluation, they can be extended for another three years. Two other lead projects are currently underway and have just been extended: “Porous Materials@Work” and “Mechanics, Modeling and Simulation of Aortic Dissection”.

One step closer to dependability

Over the past six years, the researchers involved have been able to take several steps forward in the dependability and reliability of mini-computers in our everyday lives from different thematic perspectives.

For example, one research team looked in detail at reliable localization in navigation applications – for example, in the cooperative driving of autonomous vehicles or in smart factories in which machines work independently and together. It is not difficult to see why it is essential – especially in these two use cases – that all objects know exactly where they are at all times. “Reflections of the locating signals on metallic objects can make the determination of the position inaccurate or even prevent it altogether,” says Römer. A new radio location method is providing more dependability and even benefits from these reflections. Robots equipped with this system use these positioning signals to learn where the radio positioning is less accurate and autonomously adjust the number of measurements so that a sufficiently accurate determination of the position is always guaranteed with a minimum of measurement effort.

In 2019, the project underwent an interim evaluation and was extended for three years. Read here about its achievements so far.

Security with a guarantee

Although the security of smart things and networked systems is an important topic, it has not been comprehensively developed yet. Above all, security and reliability guarantees are lacking. “Currently, there are only guidelines for radio chips such as Bluetooth Low Energy (BLE) for the Internet of Things, which always leaves a certain amount of leeway open to manufacturers,” explains Kay Römer, alluding to the fact that it often only becomes clear during the first real practical use whether two chips from different manufacturers work together correctly or not. The researchers also wanted to change that: “We want there to be guarantees in the future that devices from different manufacturers will work together correctly and safely.” To do this, it must be possible to prove that two systems can work together – and proof is an elaborate mathematical process. “We have now developed a system that can carry out this proof independently. The test system independently asks the chip being tested questions in the form of radio messages. The test system independently derives a mathematical model from the responses of the radio chip. You can then compare the models of different chips in an automated way to prove if the chips are compatible or show where they don’t work together.”

Topics of the future: service life and sustainability

In addition to guarantees and reliability, there will be other important research topics on the Internet of Things in the future. For example, the longevity of IoT applications: “Smart systems are already being used in building surveillance. These systems have a service life of a few years, but the buildings in which they are installed are designed for decades or even centuries. We will have to figure out how to deal with this discrepancy.”

In addition, sustainability is also playing an increasingly important role: “Building and operating sensors and chips consumes resources and energy, but on the other hand they can also help to save resources and energy. We have to take a close look at where the benefits outweigh the costs and in which areas of application we don’t necessarily have to become ‘smart’ but where it would be perhaps more clever to remain ‘dumb’,” says Römer. For example, vineyards can be monitored using weather sensors to predict the development of fungal diseases but: “As scientists, we naturally want to have all the possible data. But it must always be decided on a case-by-case basis whether conventional protection measures, such as the choice of suitable grape varieties or locations, are not more sensible here. So the overall balance of the deployment of such smart solutions needs to be analysed.”

So there will be enough questions in the future. The work that was started in the lead project will therefore not come to an end even after the official end of the project. “Many interdisciplinary initiatives have emerged from the lead project. For example, the doctoral programme DENIS (Dependable Electonics Based Systems) or the special research programme “SpyCoDE: Security and Privacy by Design”. We are laying the foundations here for the application of IoT in other areas.”