Research at the interface between medicine and technology

Graz was instrumental in the birth of biomedical engineering in Austria 50 years ago – a step that laid the foundations for a long record of research successes. Today, numerous institutes work at the intersection between medicine and technology. 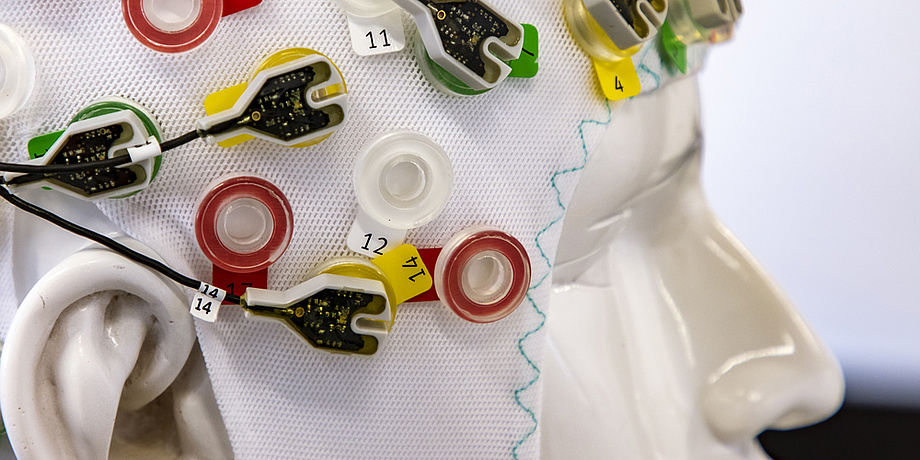 For 50 years, research has been conducted at the interface between medicine and technology at TU Graz. © Lunghammer – TU Graz

Renovated just a few years ago, the Biomedical Engineering Building at Stremayrgasse 16 is now home to several institutes. The name of the building is no accident: when it comes to clustering specialisations at a single site, TU Graz is second to none in Austria. Alongside institutes focusing specifically on biomedical engineering, the various working groups and research projects based there are investigating a wide range of areas where medicine and technology overlap.

Researchers at the Institute of Neural Engineering focus on communication between the human brain and computers. Processing brain signals – as well as measuring them – is one of the institute’s core focuses. Its findings have found their way into various technologies, such as thought-controlled robotic arms and neuroprosthetics. Neurofeedback systems, cognitive neuroscience, and neuron modelling and simulation – in particular of astrocytes – are also on the research agenda.

The institute’s successes, including the ERC-funded Feel Your Reach project, underline the importance of research in this field. As Head of Institute and project manager Gernot Müller-Putz explains: “We’ve managed to make direct use of attempted movement for neuroprosthetics – a paraplegic person simply made an effort to perform a particular movement, and we measured, processed and then executed the related brain signals using EEG. In the past, we needed some lateral thinking so, for example, the subject would have to think about moving their feet in order to move their left hand.” The team at TU Graz primarily uses non-invasive methods, such as EEG, to measure brain signals. “Systems that are implanted directly into the brain are producing better results. But we’ve demonstrated that it’s also possible to control prosthetics using non-invasive methods.” In addition to improved and continuous control, the team has developed a feedback system that also enables paraplegic individuals to feel the movement of a prosthesis such as a robotic arm.

Basic research into cognitive neuroscience and passive brain-computer interfaces (BCIs) is another important aspect of the institute’s work. And more recently, the institute has also turned its attention towards computational gliascience, which focuses on neuron-astrocyte models.

Meanwhile, the chance to participate in the Mirage 91 BCI Racing Team is another attractive option for students. The student team develops proprietary BCI applications, which it then enters in international research competitions – such as CYBATHLON, a contest where people with disabilities compete against one another, performing tasks relevant to everyday life with the support of cutting-edge technical assistance systems. 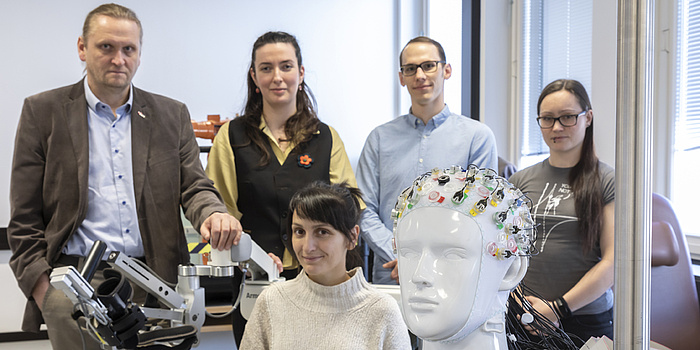 Research at TU Graz’s Institute of Medical Engineering focuses on in-vivo magnetic resonance tomography (MRT). The institute collaborates with domestic and international partners to devise new strategies for magnetic resonance imaging (MRI) and identification of magnetic resonance biomarkers. “We have pushed back the boundaries of conventional imaging considerably using special multi-channel measuring procedures and improved variational reconstruction techniques,” explains Head of Institute Rudolf Stollberger. At the moment, the institute’s researchers are carrying out detailed investigations of perfusion – the circulation of blood in the brain – using MRI, and without contrast media. “This has been a key line of research within the scientific community for many years now. But the real breakthrough came once we combined all of the newly developed methods.”

Improving the functional information, which in turn enhances the quality of an image, is another important research topic. The now-completed CONQUER project demonstrated that biocompatible molecules identified by means of quadrupole resonance can be used for contrast generation. The Next Generation CEST MRI project, which has just been launched, is also aimed at achieving improvements in imaging. “This method provides information about the presence of certain molecules. For example, when a tumour develops in the body, particular proteins are synthesised more strongly. And CEST contrast makes these condition-specific metabolic processes visible.”

Researchers require MRI scans taken using the highest possible field strengths in order to visualise these metabolic procedures. “However, high field strengths are inhomogeneous and the image produced has different contrasts,” as Stollberger points out, referring to another research approach. “At the moment, our efforts are focused on placing excitation and saturation pulses on a completely new footing, which would safeguard against inhomogeneity, with the help of mathematical procedures.”

Under the BioTechMed-Graz research partnership, the University of Graz and TU Graz jointly acquired an MRI machine for research purposes; the device is now housed at TU Graz. It enables researchers to test their own ideas and advances, and is also available for use in research projects. “Such measurements are an important research tool, especially in psychology,” says Rudolf Stollberger. 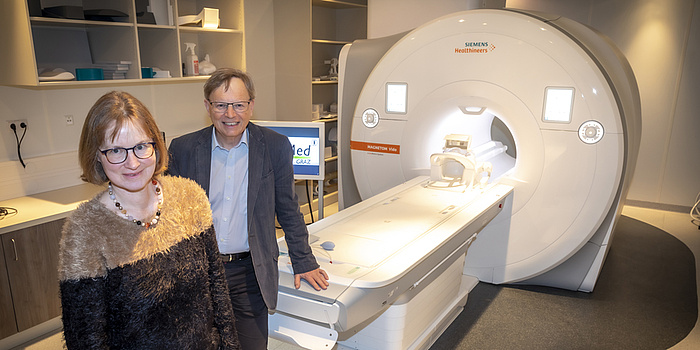 Researchers at the Institute of Health Care Engineering with European Testing Center of Medical Devices are working on the development of new technological approaches for health diagnostics and therapy.

At present, the team is investigating the effects of traumatic brain injuries using innovative optoelectronic simulation procedures, as part of a project titled ‘Light-controlled organic semiconductor implants for regeneration after TBI’ (LOGOS-TBI).

“We recently published the world’s first digital cancer cell model, an achievement we’re particularly proud of,” comments Christian Baumgartner, who heads the institute. “This has unlocked completely new approaches in cancer research and drug development.” A detailed description of the research can be found in a press release entitled ‘The World’s First Digital Model of a Cancer Cell’.

The European Testing Center of Medical Devices is an integral part of the institute. The unit performs testing on newly developed products and certifies their compliance with the relevant standards, which in turn ensures that the products meet certain safety and performance levels. “The testing centre is the only university facility of its kind in Europe,” Baumgartner adds. A Planet research article, ‘Testing centre for Medical Devises: Safety for patients’, takes a closer look at the facility’s work.

“We build on approaches and methods from mechanics and biology in order to gain a better understanding of biomedical processes in the human body, and develop new diagnostic and treatment options,” says Head of Institute Gernot A. Holzapfel, outlining the research strategy at the Institute of Biomechanics. Using devices developed in house, researchers analyse tissue samples using tensile, shear and failure tests, recording the resulting microstructural changes with the help of imaging microscopes. Their aim is to more accurately describe and simulate biomedical processes, such as those that occur in human organs as well as in body proteins, and the progression of diseases that affect them.

A TU Graz lead project, ‘Mechanics, Modeling and Simulation of Aortic Dissection’, is currently playing a central role – the focus is on analysing aortic dissection, a life-threatening condition caused by a rupture in the aortic wall. The project team headed by Gernot A. Holzapfel has been fine-tuning simulation methods, which will ultimately pave the way for patient-specific models that physicians can use to enhance diagnosis and test particular treatment options. 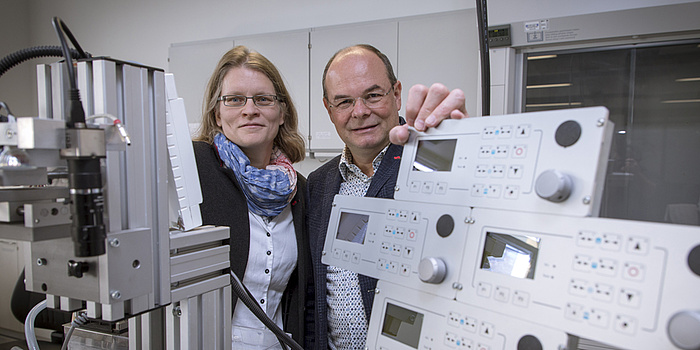 Laila Taher, Head of the Institute of Biomedical Informatics, is making use of machine learning and big data analysis techniques to gain insights into the human genome. “Once human DNA had been sequenced for the first time, everybody thought it would lift the lid on the secrets of humanity,” she says. “Of course, that didn’t happen. On the contrary, the sequencing process generated huge amounts of data, a blueprint for our bodies, but it only comes to life through interaction with our genes. At the moment, we still don’t really understand these processes.”

Alongside these specialist institutes, a number of TU Graz working and project groups are giving their all in order to improve medical technology. They include the Medical Image Processing working group based at the Institute of Computer Graphics and Vision. Focusing on clinical application, the researchers there are developing machine learning methods to process medical images such as computed tomography (CT) or magnetic resonance tomography (MRT).

Three Graz-based universities – TU Graz, the University of Graz and the Medical University of Graz – have joined forces to form BioTechMed-Graz, a collaboration focused on biomedical research. Above all, a number of inter-university flagship projects have helped to boost the city’s international standing as a biomedical engineering hub.

One of these successful projects, ILearnHeart, was completed in 2020. It concentrated on clinical imaging, with the aim of improving treatment of incurable cardiovascular diseases. A patient-specific simulation model was developed which supports diagnosis and treatment planning for such conditions. Initial studies using a digital twin heart were highly promising, and the technology will now be refined in a follow-up project. 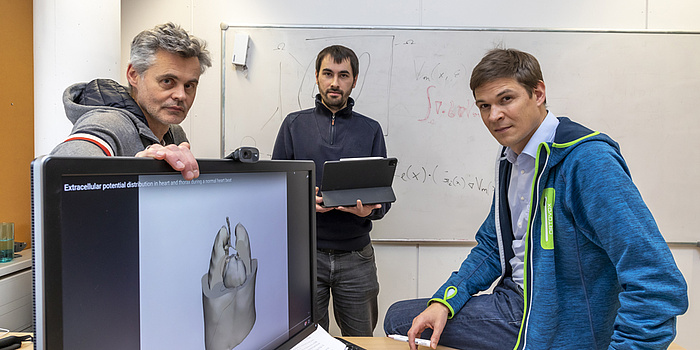 In the iLearnHeart project, TU Graz researcher Thomas Pock, together with colleagues from the University of Graz and MedUni Graz, developed a simulation model that supports the diagnosis and therapy of cardiovascular diseases. © Lunghammer – TU Graz

MIDAS, another flagship project, is centred on type 1 diabetes, an autoimmune disease where the body’s immune cells attack and destroy insulin-producing beta cells in the pancreas. Thanks to research breakthroughs, this process can now be depicted and analysed by means of the latest imaging procedures.

TU Graz has a long and successful track record in biomedical engineering research, which the university will be celebrating in the course of this anniversary year. But once the celebrations are over, the researchers will return to their labs, sit down at their computers and carry on working to improve medical technology, and uncover new diagnostic procedures and treatment options.