The city has potential – for more wilderness

The future of animals lies in the city, because private gardens are often the opposite of "ecological". And even the robotic lawn mower plays into urban development. Sounds unusual? Not at TU Graz. Because here, radically rethinking the way we use space is on the curriculum of the Institute of Urbanism. 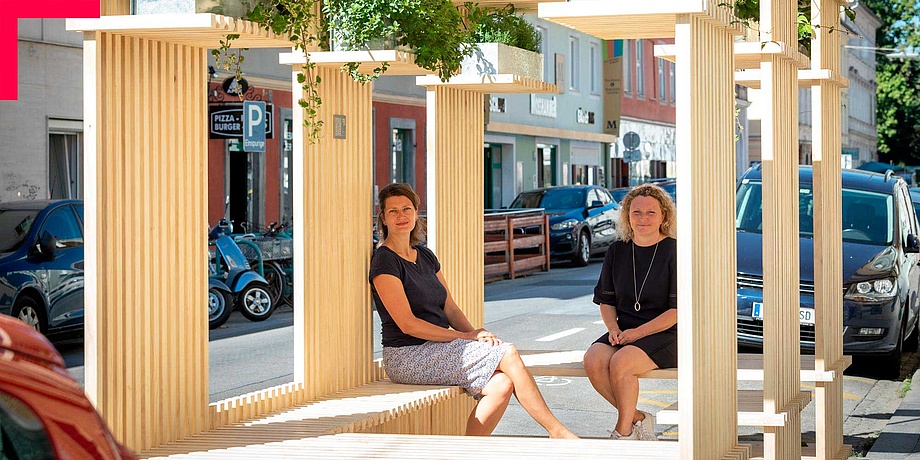 The architects and urban planners Eva Schwab and Aglaée Degros linger in public spaces. The two TU Graz researchers are convinced that temporary street furniture (so-called parklets), such as the one shown here, is one of many ways to make places attractive and lively again.

"The future of animals lies in the city. Because in public space there is simply a lot of potential to create a wilderness – in the ecological sense," says Belgian architect and urban planner Aglaée Degros. She heads the Institute of Urbanism at TU Graz. Wilderness is needed, for example, for a functioning insect and bird world. In comparison, this is more difficult in the urban periphery. "Private gardens are often not ecological, but a monoculture of English lawns," explains Eva Schwab from the Degros team. Why is this? Though given their own names, like pets, in many families, it is the almost ubiquitous robotic lawnmowers that plough through gardens, destroying the habitat of small animals and biodiversity.

"We have consumed to excess"

Austria is, unfortunately, the European soil-sealing champion, says Degros: "Soil is just very valuable and you have to say we have consumed it to excess." Therefore, a "shift", a sensitization and radical rethinking is needed. Or to put it in Degro's words: "If we have to build storage space on greenfield sites, then we just have too much stuff." And Eva Schwab from the Degros team adds: "Also in terms of food security, we must not misuse land. Instead, we need to return it to its original purpose." You often have to think in terms of large spaces, because many things are only possible there. Example? Green spaces serve to cool the city and large green spaces in particular have an important cooling effect. It is obvious that these will become increasingly important in the future.
On the other hand, what does this mean for car traffic? "Graz has a lot of potential for an attractive metropolitan area with access to the countryside. But to do that, it has to handle the cars differently," says Schwab, summing it up. Cars are not always necessary for mobility in the city: "Public space has other priorities than for parking private vehicles. We're giving up far too much space with it, for something that sits around most of the day."
Aglaée Degros believes that "the experience of quality" can lead to a change in thinking. For example, the pop-up cycle paths in the Corona period, which created spatial facts. Schwab and Degros experience the Leonhard stream, for example, as a positive space in Graz, which is used almost like a park. Zinzendorfgasse, the Augarten bay or Lendplatz are also inspiring, because here the quality of mixed use is simply palpable.

But there are still many challenges, "for example in the urban periphery, which is still planned for car mobility. A lot of work will still need to be done here," says Eva Schwab. The know-how for this is provided by the degree programme at TU Graz. If you want to study urbanism in Graz, you work for society and not like an architect for a client. Mixed use and different activities must therefore be thought of together. Ecology and social justice must not fall by the wayside.
The "clever combination of things" is at the centre – as with public and private spaces. Those who want to be mindful of our soil must therefore ask themselves why a supermarket does not have a second floor and a public park on the roof. The cause of this is that the building land is too cheap. But this should not be taken for granted and automatically stop further thinking. On the other hand, we must learn to think more in cycles, say the experts.
"Does it have to be like this?" is one of the crucial questions students should ask in urbanism, according to Aglaée Degros. The professor of urbanism at TU Graz wants her students to question things in order to then be free to develop something new.

Studying at Graz University of Technology (TU Graz): As part of the Bachelor's programme in Architecture, Graz students work on the topic of urbanism. The focus here is on urban planning, design and representation. Urban development as well as further specializations at the Institute of Urbanism at TU Graz are also part of the curriculum in the Master's programme. 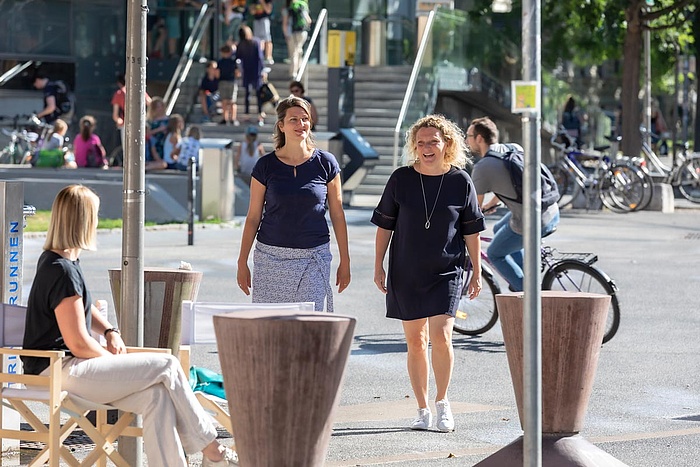 Eva Schwab (left) and Aglaée Degros and their teams at the Institute of Urbanism at Graz University of Technology are addressing the urban development challenges of the 21st century.

This is how the city lives (better tomorrow too)

Degros is also developing new things in Luxembourg with an international research team. The vision for the future is a carbon-neutral Luxembourg. "This project is so appealing because we are developing a concept for an entire country." But also in small Styrian towns, it brings urban planning research "onto the streets", so to speak. Together with project manager Eva Schwab, she is developing concepts with the participation of the residents to make these places attractive and lively again.
In Graz, the Institute works closely with city officials, contributes its expertise and has worked on the Smart City Graz-West, for example. "There is a good plan for public space here, but there is still too much thinking in categories. Things are not yet meshing," says Schwab. But they have to. After all, a city is much more than just an ensemble of buildings. There are transitional spaces, ecology, people's activities, the mixed use of spaces, etc. etc.

Young people enjoying the new (old) freedom in the Stadtpark (city park) were a big topic after the lockdowns in Graz. Young people have virtually taken possession of this space. "This is easy for me to understand, that freedom is being celebrated in the park," says Degros. "And it is at the same time good for our discipline of urbanism, because it underlines what we have been saying for years now. It needs that quality." And young people experience the quality of spaces such as that of the Graz Stadtpark particularly intensively: "Don't forget that, when you are in the profession!", Aglaée Degros advises her students at the end of their training.