What should I study: seven answers

They made their choice of study programmes – and decided to study technical or scientific subjects. Students of Graz University of Technology give their reasons and explain what they love about their studies. 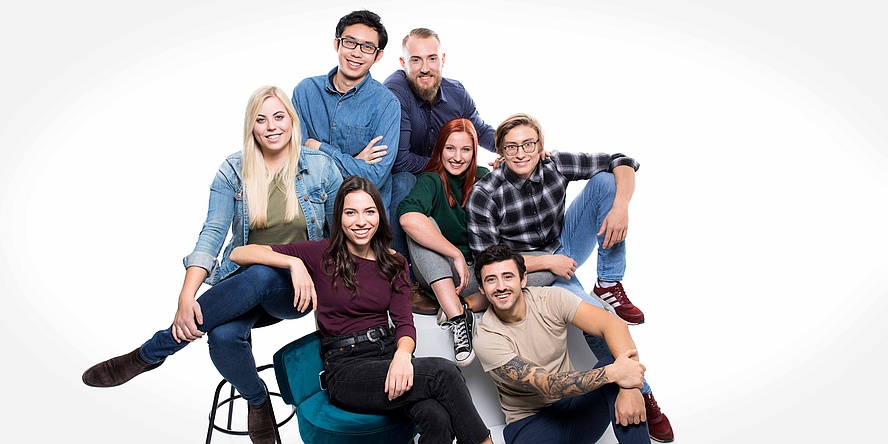 Barbara Glanzer, Andreas Kohlweiss, Elliot Koh Jing Yao, Lukas Müllwisch, Keivin Nikolli, Theresa Schürrer and Lisa Thieme are studying for a bachelor's, master's or doctorate at Graz University of Technology. They are the new "faces" of their university and have applied in the "BeTheFace" casting to represent Graz University of Technology (TU Graz) for one year. The News+Stories editorial team asked why they chose their studies, what brought them to TU Graz, who they would recommend their field of study to and what professions they would like to pursue.

"...because I've always been interested in the effects of spaces and buildings on people's lives."

Theresa Schürrer loves the constant variety in her studies of architecture and the opportunity to realize herself creatively. "As an architecture student, I can design and create rooms and buildings that meet the ideas and needs of the users, and I can create a pleasant spatial atmosphere," she says, explaining her motivation. She would also recommend the course to anyone who wants to combine creativity with technology. The native Upper Austrian chose TU Graz because of the many international connections with the “Graz Tech” (TU Graz). After her studies, Schürrer can imagine a career as an architecture journalist as well as working in an architectural office.

"... because topics such as automation technology have fascinated me for a long time and the study of electrical engineering opens up many career opportunities, for example in the field of renewable energy."

Lisa Thieme owes her enthusiasm for technology to her father, with whom she fully automated the family home as a child. Technical internships and project work during her penultimate school year brought her even closer to electrical engineering. Although she originally comes from Germany, for Thieme her decision to study in Graz was never in question. “Not only is Graz the perfect city to study in, but TU Graz is also the perfect university. It offers so many opportunities, such as stays abroad or working in student teams, such as the TU Graz Racing Team or the TU Graz Field Robotics Team TEDUSAR." According to Thieme, anyone who can imagine a combination of electrical engineering with mathematics, energy economics, physics and ethics is right for electrical engineering. "This study programme, with its many practical classes and tutorials, keeps me on the ball."

"...because I'm interested in the industrial implementation of chemical processes – and the challenge of protecting the environment."

“The process engineering and chemical and pharmaceutical engineering study programmes combine many different disciplines, such as chemistry, physics and mechanical engineering. I like the fact that a wide spectrum of knowledge is imparted through this," explains Lukas Müllwisch. On this solid basis he wants to work in the management area of a corporate group. At TU Graz, Müllwisch appreciates the quality of the education and the wide range of programmes abroad, which he definitely wants to take advantage of. He advises everyone who is equally interested in chemistry and technology to study process engineering.

“… computer science gives you the tools to solve real world problems and to see the results first-hand.”

“I enjoy working with computers. Writing a programme and seeing it work gives me a great feeling of satisfaction”, says Koh Jing Yao, describing the inner drive that he later wants to live out in research. What he particularly appreciates about the master's programme in Computer Science is the wide range of courses offered in various fields of computer science. "If you love worthwhile challenges, you should choose computer science," recommends Koh. What brought him from his home in Singapore to Graz? "The great reputation of TU Graz, which many friends and acquaintances have confirmed to me from their own experience.”

"... because we deal with natural materials, natural resources and the natural environment – which means that every project is as unique as nature is. That's what I love!"

"This branch of engineering always surprises me with the feeling of being both very clever and very stupid at the same time," says Nikolli, outlining the field of tension in the study of geotechnics and hydraulic engineering, which he does not want to miss in later life. "I chose this course of study because I see it as my duty as a human being to give something back to the world. My contribution is to improve and create infrastructure – based on natural resources". Among many other opportunities, the Albanian-born student chose TU Graz because his master's programme is offered here in English and because he hopes that the good reputation of TU Graz will support his career.

"...because I want to solve techno-economic problems and make a valuable contribution to our society."

Andreas Kohlweiss became enthusiastic about mechanical engineering at an early age and realized during the course of his studies that industrial engineering would enable him to apply his knowledge to a wide range of industries. "I can recommend this course of study to anyone who has an interest in mechanical engineering and a little patience," says Kohlweiss. His tip: inform yourself early on about all the different areas of specialisation since the study programme is very multifaceted." What Kohlweiss likes about his doctoral studies is that they are individually tailored to his own scientific specialisation and that his work as a university assistant enables him to contribute to interesting areas of teaching.

"...because I'm excited to be involved in the development of new technologies, processes and materials."

"I recommend a degree in physics to anyone who wants to develop modern technology further and is not afraid to learn the physical basics," says Barbara Glanzer. "The way physicists work is exciting, diverse and solution-oriented. I chose my study programme, among other reasons, because I love solving complex problems." Glanzer stayed at TU Graz because the good contacts of the University with large semiconductor companies enabled her to work on the development of a novel process for an industrial partner in her doctoral thesis.

Shared experiences: contributions from and with students