Studying: Make the right choice and you’re half way there

They’re studying at TU Graz, but how did they get there? Through the system? Due to talent? By accident? This is how seven students made their way to their engineering and science studies. 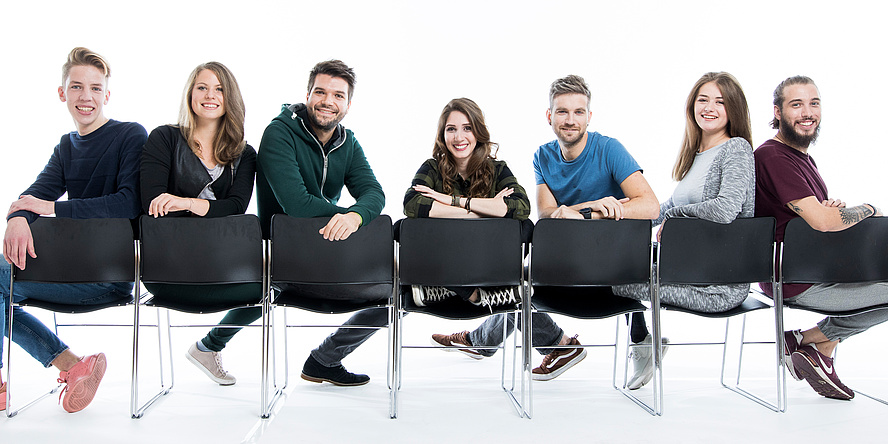 Thomas Kubin, Peter Joachim Heinrich, Marko Buchkovskyy, Thomas Wohlfahrter, Hannah Brunner, Camilla Reis and Amila Haseljić are the new faces of TU Graz. They won the ‘Be the Face’ casting through which Graz University of Technology (TU Graz) seeks students who want to represent the university in bachelor’s, master’s and doctoral programmes. The News+Stories editorial team asked them why they were studying, what study programme they had chosen and what advice they would give to freshers.

‘... because when I was a child, I reorganised my room using true-to-scale plans.’

‘I was always rearranging my rooms – drawing a small plan for my room every couple of months and trying to arrange my furniture differently. Also, I’ve been taking photos since my childhood and wanted to combine creativity with real work,’ says Thomas Kubin, illustrating the background to his choice of studies. Even then the student from Graz only finally chose architecture after an excursion into law. He sees his future in architectural typology because buildings with special requirements, such as theatres, restaurants, museums and also dwellings need intensive debate about their use. In addition, Kubin has been working in the press office of the Students’ Union of TU Graz since the 2018/19 academic year.

‘… because I find it fascinating shaping the environment and at the same time doing something good for people.’

From childhood on, Peter Joachim Heinrich, whose father owned a building firm, has never been a stranger to building sites. He was always interested in technology. The very first lecture at TU Graz filled him with enthusiasm. And even today he is fascinated by the possibility of shaping nature through structures such as dams to create a good living environment for people. ‘TU Graz has a very good reputation for civil engineering and because the University of Music and Performing Arts shares the same location, I decided to go to Graz,’ says the student from Fürstenfeld. He enrolled at the University of Music and Performing Arts during his school days as a non degree-seeking student. ‘How harmonies emerge from tones is actually pure mathematics,’ Heinrich says, describing the shared basis of technology and music. He wants to complete his organ studies after his doctorate.

Marko Buchkovskyy came to Linz, Austria, from Ukraine to initially study mechatronics. Even at (the German-Language) school he was better at mathematics and physics than other subjects. ‘Because I wanted to have an engineering training as well as to work as a manager I decided to seek out the Mechanical Engineering and Business Economics programme at TU Graz. I also liked Graz very much as a city to study in,’ says Marko, explaining his move from Linz to Graz after two semesters. It’s possible that the self-declared citizen of the world who wants to work in international teams all over the world will be drawn to doing his master’s in yet a different country later. But for the moment Buchkovskyy is definitely in the right place in Graz and in the right programme.

Hannah BRUNNER, Master’s Programme in Information and Computer Engineering (majoring in the Internet of Things)

‘... because it’s very exciting being active in new research areas right from the beginning.’

‘After an open day at the technical college, I happened to go in the direction of electronics. It simply felt right,’ says Hannah Brunner, talking about her beginnings. Because Information & Computer Engineering combines microelectronics with computer science and telecommunications, and TU Graz has a good reputation in this area, she chose TU Graz. She focuses on the IOT – the Internet of Things – in her master’s programme. This deals with technologies which connect physical and virtual objects with each other. ‘There’s always something new in the field; you never stop learning. There are very many application possibilities in all fields of life,’ says the master’s student from St. Bartholomä in Styria, explaining her enthusiasm. ‘On top of this, Graz is a hotspot in the area of electronics, and there are very many companies here.’

Training as a radio and television technician, skiing service technician in a ski hire service, piercer and tattooist, and finally a machinist at a wooden board business. Thomas Wohlfahrter made his way through various career stages before passing his general qualification for university entrance to study for a bachelor’s programme in physics as a mature student. ‘I am always the one who gets on people’s nerves with my questions. I’m interested in so many things, I’m always digging deeper and wanting explanations. Mathematical theory has always inspired me – logical things like logic puzzles and IQ tests. Mathematics is the language of physics, and both of them together describe many phenomena of daily life exactly, and this helps me to understand the world,’ says the man from St. Blasen in the Murau District of Upper Styria, describing how he arrived at his studies. Especially at the beginning of the study programme, mathematics dominates in physics, he thinks.

‘... because chemistry is like a secret language for me, by which I can understand the world better.’

‘Originally I didn’t know what I should study,’ Amila Haseljić reveals. But the native Bosnian has been interested in chemistry since primary school and used to love experiments in the lab and group work. So she decided in favour of the bachelor’s programme in chemistry. ‘Everything around us is chemistry. Breathe in and you perform a chemical reaction. If you understand the language of chemistry, you hold the key to the development of new technologies in your hands,’ says Haseljić convincingly. On the basis of her international experience, Haseljić chose Graz as the city of her studies. The city was familiar to her because the famous Bosnian writer and Nobel prize winner, Ivo Andrić, studied for a while at the University of Graz. Because the chemistry study programme is organised in the framework of NAWI Graz, Haseljić attends courses at both the latter university and TU Graz. The student, who was not very proficient in German before, has in the meantime made a lot of progress by doing courses.

‘... because I develop things which make life easier for people using my creativity.’

Camilla Reis has liked business management since she was at commercial academy and wanted to combine it as a subject. ‘I then excluded everything that didn’t interest me, and computer science was left over,’ says the student from Vorarlberg, Austria, with American roots, describing how she found her rather unconventional way to the software development and business management programme by a procedure of exclusion. ‘I had zero experience in programming; I wasn’t aware of the potential.’ Today she loves creating things out of nothing for people to use everyday. ‘In computer science everything keeps on developing; nobody can teach you anything one-to-one. It’s exactly this independence that I like,’ she says, summarising four years of study.

Personal advice of the ‘Faces of TU Graz’ for studying

•    FIT (women in technology) info day and technology taster programme for women in February: Programme and registration on the FIT (women in technology) web page
•    TU Graz information stand at the BeSt3 fair for jobs, university study programmes and further education, Vienna: Next dates in the BeSt3 fair calendar
•    Open day of the 4 Graz universities TU Graz, University of Graz and University of Music and Performing Arts in April
•    Complete survey of all bachelor’s programmes and Advice from TU Graz for those interested in studying