The daily life of a student: Marko, Citizen of the world in Graz

For Marko Buchkovskyy, Austria is a launch pad to an international career. The native Ukrainian studies Mechanical Engineering and Business Economics at TU Graz. We shadow him for a day. 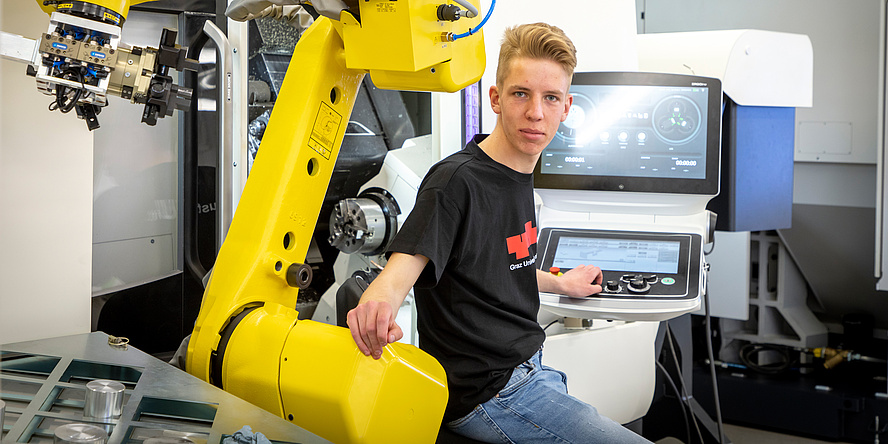 TU Graz student Marko Buchkovskyy amidst computer-controlled production systems at the pilot factory “smartfactory@tugraz” at the Institute of Production Engineering.

A typical day in the life of Marko Buchkovskyy begins before 8 am with a quick coffee in his room at the Münze student residence in Münzgrabenstraße, Graz, Austria. The single-room flat or apartment is equipped with bathroom, WC and kitchenette, so no reason to leave the four walls before breakfast. Marko has been living here since he started his bachelor’s programme in Mechanical Engineering and Business Economics at Graz University of Technology (TU Graz) in the autumn. He was familiar with Graz, the second largest city in Austria – right at the heart of Europe, from visits he made to Austria with his family. He found the flat in the newly renovated, beautiful old house that used to be used as a monastery in former days quickly and easily via Google. “Rooms cost from 300 euros, and WiFi, operating costs and the use of all the social rooms are included in the price. This is cheap for Graz and that’s why the residence is booked out very fast. You absolutely have to look for a room before the beginning of the winter semester,” says Marko, giving important advice. The “Münze” is also very popular because of its perfect location between the three TU Graz campuses. Marko’s first lecture of the day is barely five minutes walk away. 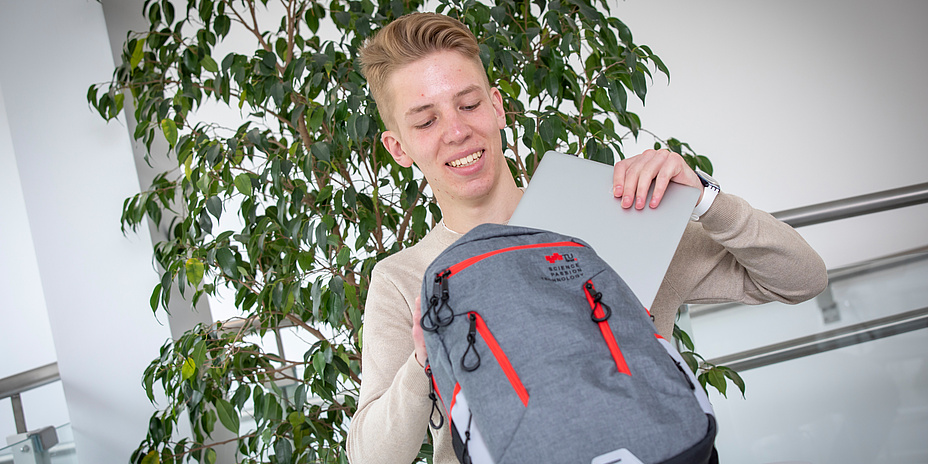 The mechanics lecture is in physics lecture hall P1, one of the biggest lecture halls at TU Graz at Campus Neue Technik. The next one and a half hours are devoted to the foundations of statics and dynamics. In addition to mathematics, foundations of natural science, design theory, basics of design and technology, engineering informatics, theoretical mechanics and economics, one of the focal subjects in the bachelor’s programme is statics. And the mechanics examination is one of the big challenges in the first semesters. Deep in concentration, Marko follows the lecture by Katrin Ellermann, head of the Institute of Mechanics. The teaching language is German as it is in most of the other courses in the bachelor’s programme – no problem for Marko. “In my home town Lviv, I attended a school with broadened German teaching until my matriculation exam (entitlement to study at university). So I was able to gain a certificate for my German skills at C1 level with the German Language Diploma (DSD) from the Kultusministerkonferenz.

You can find out about which language certificates for admission to university studies are accepted and how interested persons without suitable German-language skills can be admitted initially as non-degree seeking students on the TU Graz website under “Proof of German Language Competence”.

Just before the midday meal he meets up with other students in a small study group at M-Café in the middle of Campus Neue Technik, on the ground floor of the Biomedical Technology Building (the so-called BMT) to finish the homework and discuss any problems. “Studying together on campus is much more productive than alone at the residence,” says Marko from experience. 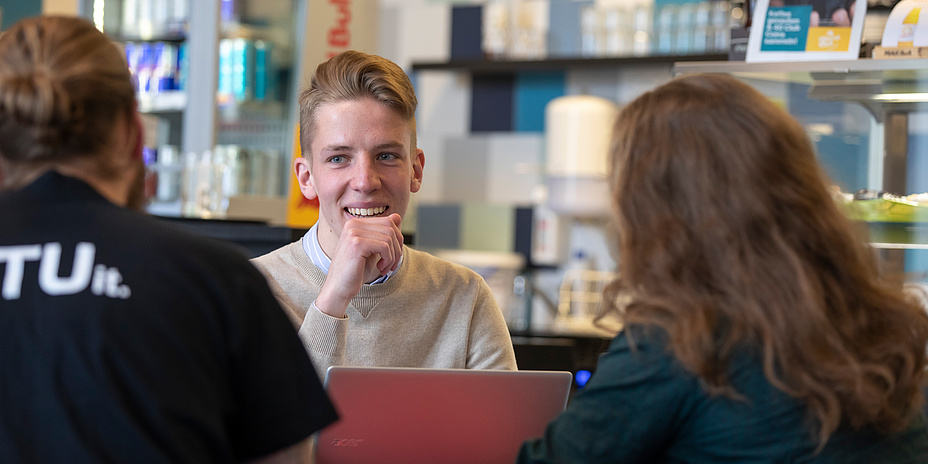 Open learning areas or restaurants like the M-Café (pictured) are popular meeting places for students at TU Graz.

It is now midday and tummies are rumbling. As is so often the case, the shortest path leads several floors up to the Rooftop canteen on the roof of the BMT. It’s worth coming here just for the view. Today Marko chooses today’s set meal for six euros. And there is also a broad range of small snacks, Asian curries, jacket potatoes and salads fjrom the buffet. While eating on the big terrace, the panoramic view over Graz on such a beautiful day is simply fantastic. And soaking up the sun in one of the comfy deckchairs afterwards is the icing on the cake.

The TU Graz News+Stories editors write about culinary delights at Campus Alte Technik, Neue Technik and Inffeldgasse in the ongoing article Food story. The day’s culinary offerings at eating places close to the campuses are published by the IT Services (ZID) on menue.tugraz.at.

A meeting has been planned for the afternoon which has the potential to mobilise energy even during the sleepy post-lunch phase: a project meeting of the “Product Innovation Project” (PIP). The PIP is an open course for which students have to qualify in a multi-stage admission procedure due to the limited and much sought-after places. Project participants of various subjects, nationalities and universities give their attention to real tasks set by industrial partners. At the kick-off, companies and students come together in a match-making process and work in small groups for two semesters with tools and methods they have chosen themselves, supported by teaching staff from the Institute of Innovation and Industrial Management at TU Graz. Marko feels he’s been optimally placed in the VENTREX Automotive group. The team is working on further developing a core product of the compressor and valve technology supplier for the global automotive industry. For Marko the PIP is perfect preparation for his choice of career and at the moment his favourite course. He chose his study programme because he wants to work later as a manager in a multinational corporation with an international team. With a combination of business economics and mechanical engineering he has learned the basics of what engineers do – the very people he will one day manage. His PIP group meet up once a week at the FabLab in the innovation lab at Campus Inffeldgasse. Marko walks from Campus Neue Technik to the Campus Inffeldgasse in the St. Peter district. 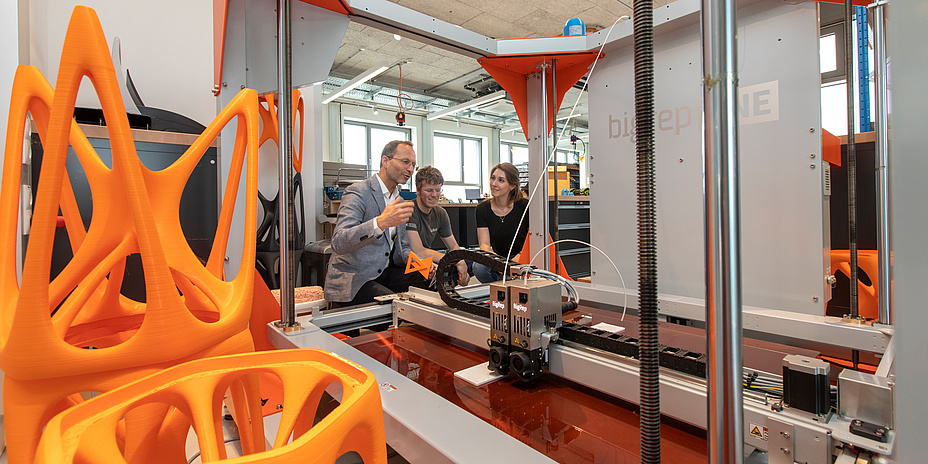 The equipment at TU Graz’s innovation lab at the Institute of Innovation and Industrial Management leaves nothing to be desired.

A quarter of an hour later he enters the bright and friendly space that always makes him marvel. “The FabLab leaves no desire unfulfilled. It is equipped with cutting-edge devices for producing prototypes and innovative product designs – from 3D printers via CNC and 4 and 3-axis milling machines to appliances for laser cutting and laser engraving, water-jet cutting, sand-blasting, circuit-board printing and vinyl cutting. Also, the learning and teaching infrastructure in the FabLab and in the neighbouring DesignLab is architecturally and technologically state of the art. People who are interested in studying here really should be shown what infrastructure TU Graz can offer,” says Marko enthusiastically.

Students and researchers of various disciplines as well as start-ups, SMEs and established industrial enterprises meet up at the recently opened innovation lab at the Institute of Innovation and Industrial Management for shared innovation work. The public is also welcome at the innovation lab: every Thursday afternoon aspiring makers can realise their ideas and designs at TU Graz. Switch to the video about the TU Graz innovation lab on YouTube to gain insights.

After a work-intensive project afternoon, Marko travels back to the student residence. As in every other day of the semester, there is a long to-do list of lectures, exercises and projects. Celebrations don’t happen very often, though sometimes take place in the party room at the Münze. But there’s nothing on this evening. After all his hard work, perhaps he’ll be drawn to a bar in the picturesque Graz city centre. In his not quite two semesters at Graz, the Ukrainian has made friends in the student residence with two students from Brazil and Austria doing their bachelor’s and doctorate. He is slowly but surely making new acquaintances, also with other students from Ukraine. Perhaps he’ll see the evening out with his friends in the Kunsthaus Café at the Museum of Contemporary Art – the so-called “Friendly Alien”. 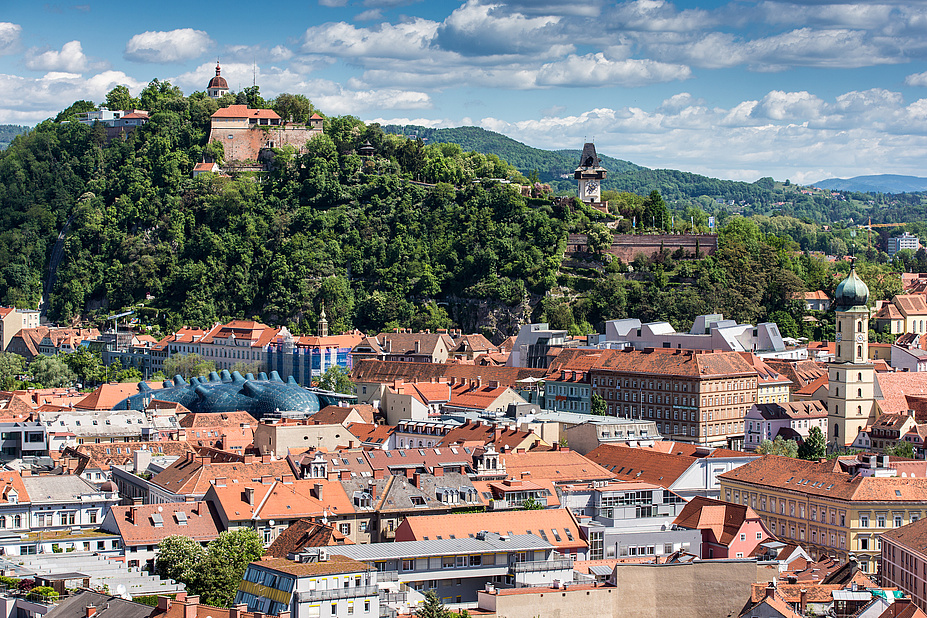 The Kunsthaus Café at Kunsthaus Graz is a popular meeting place and a good point of departure to explore the city. The architecturally impressive, biomorphic blue building (left) lies in the city centre not far from the Graz Schlossberg on the other side of the River Mur.