When an Electrical Engineer Hits the Stage...

Manuel Galler is the audience’s favourite. The 33-year-old electrical engineer was able to bring the Science Slam state championship title to Graz for TU Graz. His actual research topic is power grid protection. 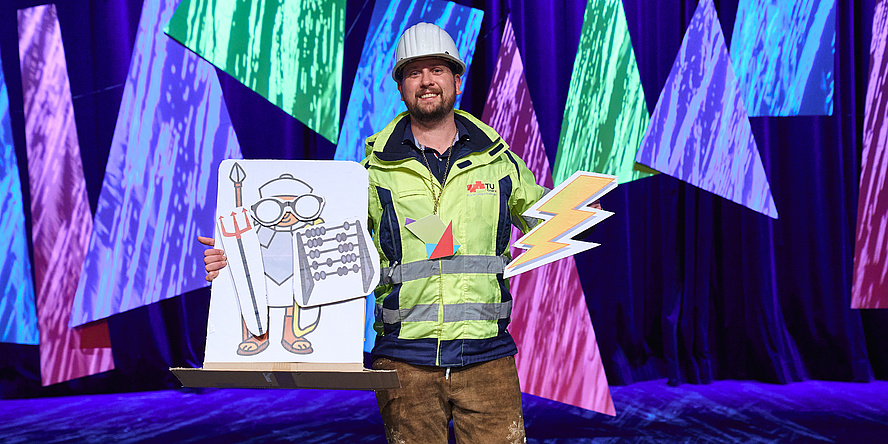 “Our topic is not exactly a show stopper,” he says with a grin a few weeks after winning the title. “In the public eye, it only becomes relevant once the power is gone and when it’s a matter of potential blackouts. My incentive was that nobody actually knows how a blackout develops and what actually happens in an electrical grid.” No sooner said than done. He made several “watchmen” as visual aids and dressed up in Austrian leather trousers, high-visibility waistcoat and helmet for his performance. The researcher first won over the audience at the Styrian Science Slam at the Orpheum in Graz and a little later at the Austria-wide Science Slam finals in Vienna.

Of course, his day-to-day research work does not take place on stage. Rather, in a laboratory at Inffeldgasse in Graz. Here, the Carinthian-born researcher investigates the behaviour of solar inverters that convert the direct current generated by photovoltaic panels, for example, into alternating current, which can then be fed into the electrical grid, and how this affects grid protection. “There was a research gap in this area,” he says of his beginning at TU Graz. “New energy sources in particular, like the sun and wind, make adaptations necessary because they are more unpredictable than conventional sources.” In his laboratory, he has set up several power electronic systems and converters, and is investigating in experiments and simulations how different scenarios can affect grid protection.

The dream of every parent

From his childhood, he tells of similar interests that researchers often have – to the chagrin of their parents. He frequently grabbed screwdrivers from the house toolbox and began to disassemble, examine and reassemble things. “That was the easy part,” he grins. “But I always had pieces left over at the end.” He says that he was then able to optimize his way of working to such an extent that the dismantled devices were also functional again. Only, “The phone didn’t work so well any more.” Attempts by his parents to change his mind or to bribe him with Lego failed miserably.

Part of something big

Lucky for research. Because “Technology has always interested me and never let go.” He found his way to TU Graz via detours. After his technical college training, he was recruited by a company that dealt with wind turbines. Again lucky for research, because: “Renewables were given to me there and I’ve stayed in this field. I’m proud to be part of something that can move all of humanity forward.”