How to Build a Test Bed

Researchers use test beds to test a variety of components for structural durability and behaviour. But there is often no suitable infrastructure on the market. How do researchers deal with this? 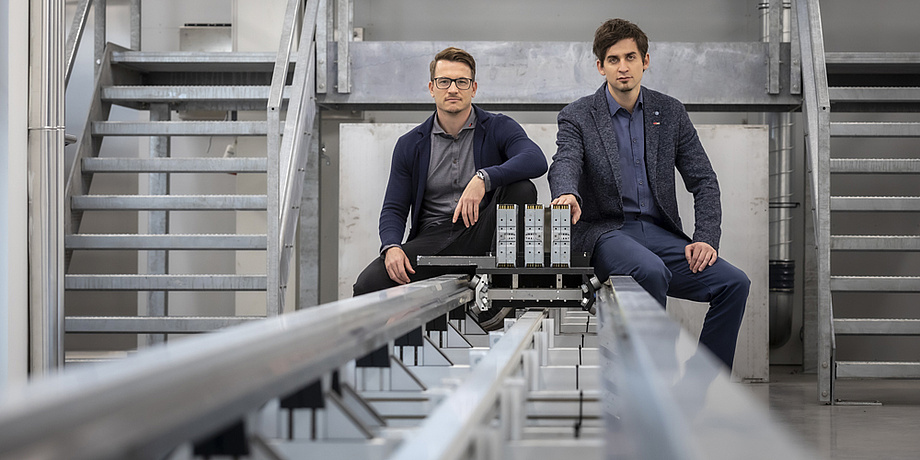 “This question is quickly answered," says Christian Ellersdorfer with a laugh. "We design and build a test bed according to our own requirements." Together with his colleagues, the researcher has already implemented several test beds for the Institute of Vehicle Safety at Graz University of Technology. "Research always means being at the leading edge and working on new problems," explains Jörg Moser, head of the Battery Safety Center Graz. "Often there are no suitable test systems on the market with which we can measure the parameters we are interested in. So we have to build them ourselves."

A test bench is a test facility on which different components – such as engines, fuel cells, batteries or construction materials – are examined according to various parameters, including safety, structural durability or operational behaviour, before a new development can go into regular operation or when a component is to be optimized.

Martin Horn from the Institute of Automation and Control, who is scientifically involved with test beds per se, explains why test beds are needed in science at all: "Test stands are a complex system that can simulate realistic conditions. For example, a test bed makes a car think it's really driving down a road, and thus tests the vehicle's response." Testing test objects in the laboratory rather than "in the wild" saves money and time. But this approach is also important for another reason: namely, the reproducibility of the experiments. "We thus create perfect test conditions that deliver reliable results."

For Jörg Moser and Christian Ellersdorfer, the process of developing a test bed starts with a comprehensive concept that takes all the necessary parameters into account. “We think about what measurements we want to take and how we can do it," Moser explains. The components for the test stand are purchased from a company specializing in this area. "And then we assemble the test stand – it's like playing Lego," says Ellersdorfer smiling.

The test rigs developed by the institute's employees are now primarily found in the Battery Safety Center Graz (BSCG), which was founded in 2020, where the safety of various batteries is tested. The oldest test bed is already ten years old – the hydraulic press "Presto 420". On the other hand, the ROBIN test stand, which is used for conditioning batteries, has only been used for a few months. 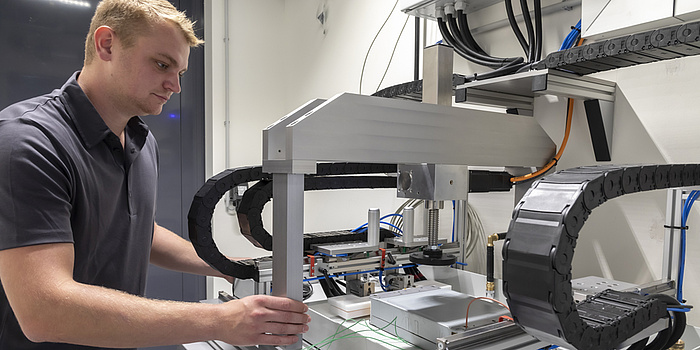 In addition to these test stands which were developed from scratch, there are also facilities that have been purchased and adapted, and test rigs that were planned for other test series and later adapted for new problems. "A test bed is never really finished," Ellersdorfer reveals. “It’s being constantly developed, and we are already thinking of various other possible applications in the design stage. After all, a plant like this is a big investment and should be able to be used sustainably."
In addition to ROBIN, the Battery Safety Center Graz also has the BATMAN and RIDDLER test beds. Too obvious to be a coincidence, right? "We have a bit of fun coming up with catchy acronyms for our test benches. We’ve become quite famous for this meanwhile. The next time we'll build a JOKER," Moser reveals with a laugh.

Not only are the research results achieved at the BSCG in demand internationally, but the Institute's test rigs themselves also attract international interest, as Christian Ellersdorfer recounts: "Researchers from other institutions – including renowned research institutes such as MIT in the U.S. – repeatedly ask us whether we would also sell our test beds. This is an honour for us, of course, because we can see that we're on the right track." Nevertheless, the two TU Graz researchers don’t sell the test beds because in their eyes research is the core area of a university and not the construction of test rigs. However, interested parties can read up on the concepts anyway via publicly available publications.

In addition to the test facilities at the Battery Safety Center Graz, Graz University of Technology is also home to many other test stands and is constantly expanding them.

For example, researchers from the Institute of Structural Durability and Railway Technology examine rail vehicle components in the Fatigue Testing Laboratory. For example, an electrodynamic shaker and a powerful servo-hydraulic system are available for testing. 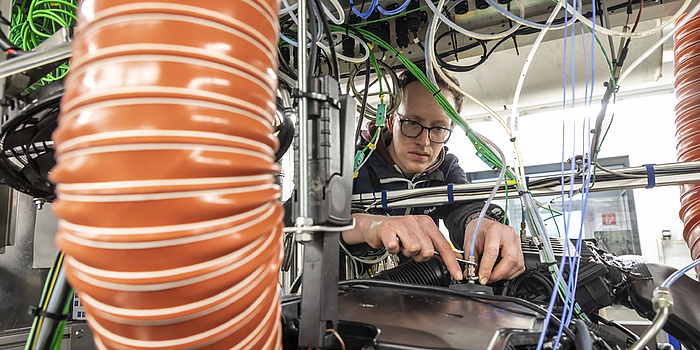 Engines are put to the test at the Institute of Internal Combustion Engines and Thermodynamics. © Lunghammer – TU Graz

At the Institute of Automotive Engineering, experts at the wheel suspension test stand deal with friction brakes and the structural durability of car chassis.

At the Institute of Thermal Turbomachinery and Machine Dynamics, parts of aircraft turbines are tested in various wind tunnels.

And at the Institute of Thermal Engineering, high-temperature fuel cells and electrolysis systems are tested on the fuel cell test stand.

In addition, the research infrastructure of the HyCentA research center at Graz University of Technology will be expanded by approximately 600 square meters when construction begins in February 2021. In 2021, a state-of-the-art gas analysis laboratory for determining hydrogen quality and a new test stand for testing fuel cell stacks will be implemented and the electrolysis test stands will be expanded. This will allow new developments to be tested extensively.

Test benches on the test bench

In addition to various components, the test rigs themselves are also put under the microscope at Graz University of Technology. More specifically, in the Christian Doppler Laboratory for Model-Based Control of Complex Test Bed Systems, headed by Martin Horn, researchers develop simulation models and control algorithms for complex test systems. Together with the Graz-based test stand expert Kristl Seibt & Co GesmbH, the team designs control systems for highly specialized test beds in the competitive automotive sector. Together with the Austrian branch of Lam Research in Villach, research is being conducted into simulation methods and control concepts for complicated processes in the manufacture of semiconductor components. "The strictly scientific approach to problem solving makes it possible to see in advance, with the help of simulations, whether a concept will work as desired or not."