Neither hard like stone, nor soft like soil: transition rock is important for almost every construction project, but difficult to study. But this is now possible at the TU Graz. 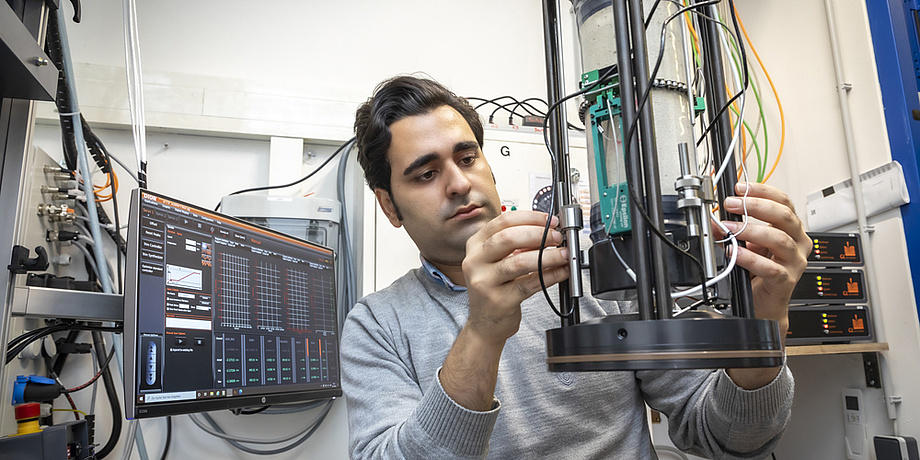 The new triaxial facility at the Institute of Rock Mechanics and Tunneling is used to test transitional rocks. © Lunghammer – TU Graz

Transition rock is soft rock and hard soil; it is inhomogeneous, anisotropic and brittle. "This material can be found almost everywhere where building activities are undertaken. And especially in tunnelling," explains Thomas Marcher, head of the Institute of Rock Mechanics and Tunnelling at Graz University of Technology. Until now, the geotechnical properties of this rock have only been determined in detail in a few laboratories throughout Europe – for example at ETH Zurich and RWTH Aachen. Since autumn, a further location has been added in the form of TU Graz.

Since autumn, Thomas Marcher and his institute have been operating a new triaxial testing facility which is specially designed for transition rocks. After all, triaxial testing systems in themselves are not uncommon. The Institute of Rock Mechanics and Tunnelling and also the neighbouring Institute of Soil Mechanics, Foundation Engineering and Computational Geotechnics have been operating such test facilities for many years. "However, our existing testing system is designed for hard rock and cannot respond sensitively enough to transition rock. The facility at the Institute of Soil Mechanics, Foundation Engineering and Computational Geotechnics is again designed for loose (soft) soil and cannot apply the necessary stresses to examine harder material," explains Marcher.

The new facility with a maximum axial force of 300 kN (equivalent to the weight of 30 small cars) can now examine both hard soil and soft rock.

How the testing facility works

A triaxial testing facility basically simulates the mountain that would exist around the rock sample. The rock is held as a cylindrical sample between steel end plates and sealed by a tight-fitting plastic membrane. The sample is laterally enveloped by a larger steel cylinder. In the space between the steel cylinder and the membrane, oil is used to apply a fluid pressure of up to 30 MPa (corresponding to a water column of 3,000 metres). Once the desired stress boundary conditions are reached (pretty much simulating the stresses in the mountain), the pressure on the specimen is increased from above (axially) until the specimen finally breaks. This shows the maximum possible stress that a rock can withstand during tunnelling. With the measurement data from such test procedures and similar ones, the mechanical properties of the transition rock, fundamental for the design of a tunnel, can be determined.

The system is housed in a specially designed climate chamber. This enables the tests, which can last many hours or days, to be carried out under the same environmental conditions (e.g. temperature and humidity).

The new facility has a valuable addition. It can also be used to measure changes in the so-called pore water – the water that is present in the fine cavities in the rock and can experience a change in pressure. On the other hand, the new facility can increase the axial pressure so slowly that an overpressure in the pore water is avoided in drained conditions. In the case of the new facility at TU Graz, the speed can be reduced to 0.015 μm/min. In the coming years, PhD student Kanthima Intachai will devote herself to precisely this topic of pore water pressure measurements in transition rocks using the triaxial testing facility. 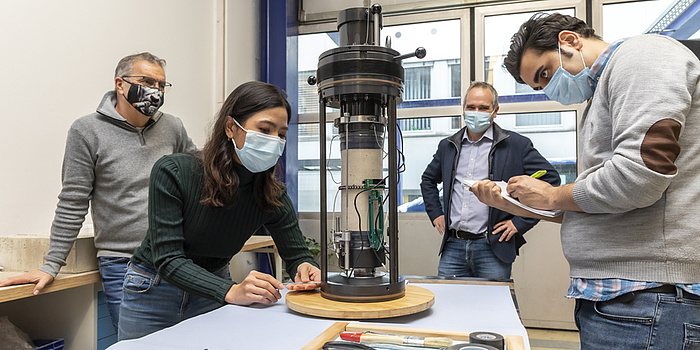 Obtaining a cylindrical rock sample with flat (flush) end faces from this transition rock is not easy. Such inhomogeneous material crumbles easily. This is especially the case when the cylindrical sample cores are drilled out of the existing rock in longer pieces. Transitional rock often consists of a wide range of individual materials, such as finest silty-clay parts and coarse rock components next to each other. Processing the cylindrical sample and especially its end faces is therefore extremely difficult and the researchers have to work on them manually. They carve the cylindrical sample and fill the missing parts with plaster. But there are also other possibilities: "We received a tip from ETH Zurich that cutting or trimming the sample, as it is called, works with a special diamond band saw, which is usually used in pathology to cut smooth sample slices from flesh and bone – hard and soft material side by side," says Marcher, who got hold of such a diamond band saw for suitable sample preparation. Prepared samples are stored in a climatic chamber, which ensures permanently suitable ambient conditions, until the test is performed.

In addition to specific scientific projects, such as the investigations in the course of Kanthima Intachai's doctoral thesis, industrial cooperation and contract research are also possible at the testing facility. "We’ve already had inquiries from tunnel-construction projects who want to sample their transition material at our site. For example, we’re going to examine rock samples from the northern access route of the Brenner base tunnel," says Marcher.