Logistics: Hustle and bustle on our transport routes

A high level of ordering activity creates a hustle and bustle on the transport routes. Logistics researchers at Graz University of Technology want to make the movement of goods more sustainable – with numerous ideas. 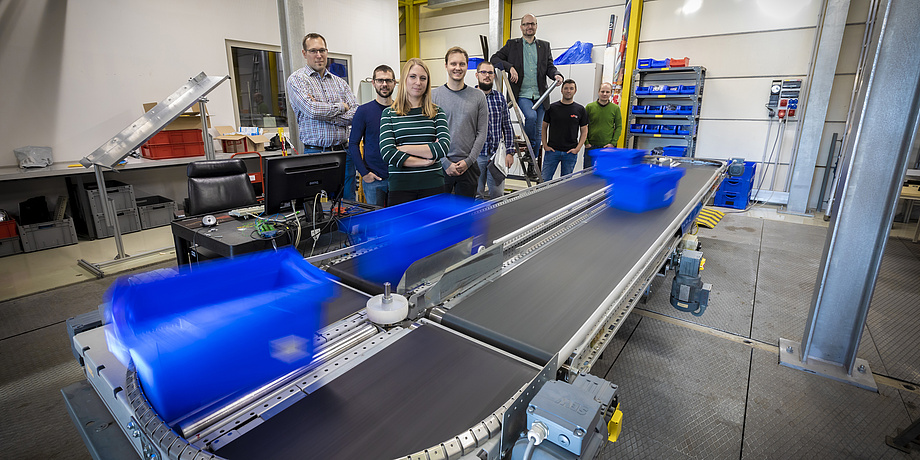 Somewhere in the middle of nowhere, a product dangles its legs over the edge of its shelf space in the warehouse and waits patiently – shoulder to shoulder with electric toothbrushes, intelligent vacuum cleaning robots and automatic dog doors. A click on a mobile phone screen several hundred kilometres away will soon bring its wait to an end. The patient product is searched for and found – two hands reach for it, carry it away and pack it in cool cardboard, the colour of which is reminiscent of tree bark. An address label is neatly emblazoned on the belly of the parcel. So the product becomes a package and the long journey begins.

“Even in the age of digital transformation and automation processes, most products in modern warehouses are still sought by people, manually transported between the rows of shelves with large shopping carts and assembled into an order,” explains Christian Landschützer from the Institute of Logistics Engineering at TU Graz. His passion for logistics developed out of the desire to make “technical equipment better”. His Goal? Getting the product from the warehouse to its destination as environmentally friendly and efficiently as possible. 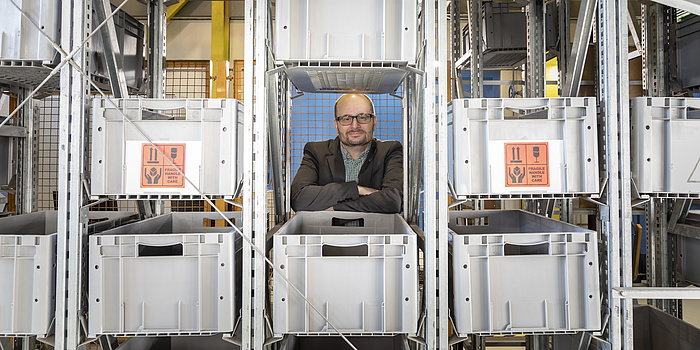 Logistics expert Christian Landschützer inside the room-high test shelf in Inffeldgasse in Graz.

In the distribution centre

The small package has meanwhile landed on a transport truck and is on its way to the nearest distribution centre. There too, numerous helping hands are still needed. In the truest sense of the word, the loading and unloading of the transporters is done by hand. Christian Landschützer describes this point in the supply chain as the “distribution bottleneck”. It takes about an hour for the small package and its fellow items to get to the conveyor. Afterwards everything works automatically. Landschützer and his team at the Institute of Logistics Engineering had set out to make this bottleneck more efficient in the project EAGLE and developed an automatic package unloading device, a kind of “unloading carpet”. The project has resulted in a start-up called PHS. “In this way we’ve automated the unloading process, but we still have a few hurdles and years of development ahead of us when it comes to loading,” says Landschützer, whose former colleagues Andreas Wolfschluckner and Matthias Fritz are now selling and further developing the unloading device known as the Rapid Unloader.

On the way to the destination

The small package is now already moving in circles on the conveyor, or sorter, at considerable speed – up to two metres per second, just fast enough not to risk being thrown off in the curve, but still making rapid progress. The address label is scanned in by machine, the parcel is automatically sorted by destination and loaded onto another truck which takes it to the sorting centre closest to the destination. There it is picked up by a delivery service, which delivers it to the recipient's address. 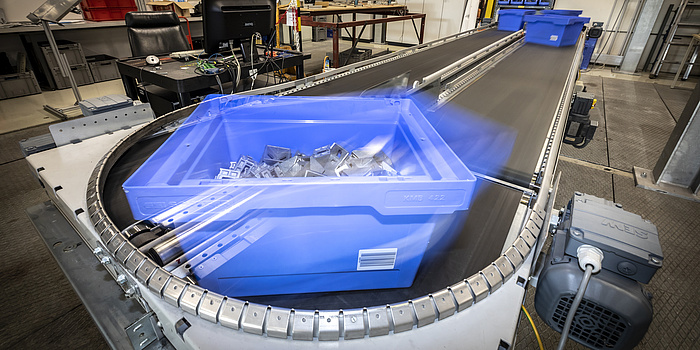 At the Material Flow Laboratory there are several experimental conveyors where loading aids and energy efficiency are tested.

“Many researchers are of the opinion that it’s currently more ecological to have products delivered to them than to drive to the shopping centre themselves,” explains Landschützer and adds: “Provided the first attempt at delivery is successful.” If this does not work, a second or third delivery attempt is required, or the delivery service deposits the parcel at another location where the recipient has to pick it up. As a result, the so-called "last mile" is the most inefficient in the supply chain and is also problematic from an environmental perspective. TU Graz’s Institute of Logistics Engineering is currently addressing these problems in the SoWAS project. Together with the Institute of Highway Engineering and Transport Planning, also based at TU Graz, and several external partners, the researchers developed a supplier-independent package station, which will be tested at Campus Neue Technik from January 2020. The special thing about it is that the system is not only open to the so-called CEP services (courier, express and parcel services), but private persons can also use the boxes to deposit things for other people.

Researchers from TU Graz already tested other ways of delivery in 2017. As a test, a mail van navigated autonomously in the city centre of Graz and delivered packages to selected recipients. In remote regions, TU Graz and the Austrian postal service demonstrated the feasibility of delivering goods by airmail using autonomous drones.

Physical Internet: When the internet transports goods rather than data

The small package is now lying in front of a front door and waiting to be opened. Its journey was long, neatly planned, but not always optimal for the environment. This is also where the Graz researchers came in.

“Stationary and e-commerce retailers have each perfected their own logistics systems,” explains Christian Landschützer, “but there is little collaboration.” The goods delivery works, but the suppliers drive half of their routes empty or only partially loaded. “The transporter carries goods from the distribution centre to the destination, but has nothing to transport in the opposite direction.” Landschützer sees a solution for these many thousands of daily empty trips in the physical internet: a network of goods transport in which the commercial and transport companies work together, transporting goods from different suppliers together and thus ensuring that the transporters are fully utilized on all routes. 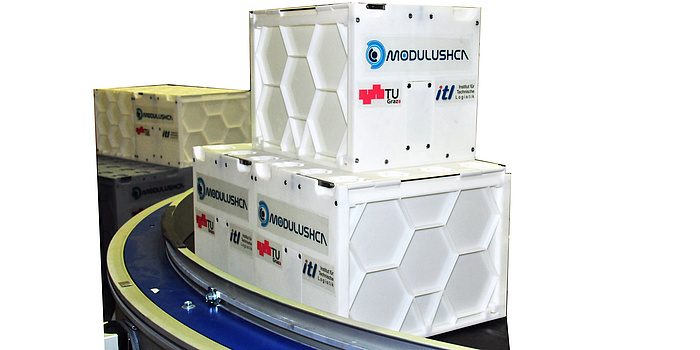 However, there are still detailed problems to be solved which currently make the joint transportation of goods with competitors unattractive, such as theft protection, cost accounting models including questions of liability and industrial espionage by competitors. “In the MODULUSHCA project, we have developed a solution in the form of our own transport box which protects the goods. The boxes are stackable, like Lego bricks, and thus make optimum use of the space available in the van together,” explains Landschützer.

Read more in a blog post on Physical Internet.

According to Landschützer, making delivery times more flexible would also make economic and ecological sense: “Logistics is not about delivering everything as quickly as possible, but rather getting it to the right place at the right time. For this reason, customers should also be able to decide when they would want a product to be delivered – for example, the string of lights for the first Sunday in Advent could be delivered a month later, even if ordered at the beginning of November. However, it must reliably arrive by the desired delivery date. “That is not yet feasible at present, so we want to have everything delivered as quickly as possible whatever the cost,” says Landschützer.

MULE - a concept for the future?

The system is based on a flexible one- or two-stage warehousing and transport system and on electrically operated, partly autonomous delivery vehicles. Large storage hubs are located near important traffic routes at the edge of urban settlements. Sustainable electric vehicles pick them up and distribute the products to customers or microhubs inside the city. In line with the distribution concept, two vehicle categories were examined – 3,5 and 18 tons.

For local distribution transport, very low-cost medium-weight electric trucks can be designed. Due to the longer loading and unloading times, it is possible to reload again and again in between. Thus the most expensive component of an electric commercial vehicle - the battery - can be reduced to the dimension and cost level of the battery of a medium electric car.

With a faculty initiative for more environmental compatibility

With the initiative Sustainable Mobility of People and Goods of the Faculty of Mechanical Engineering and Economic Sciences, ten researchers want to deal even more with the ecologization of the transport system in the coming years. But it is a long way, as Landschützer describes: "The current system works for customers and retailers supposedly perfect. Replacing it cannot happen overnight because no one can risk the supermarket shelves suddenly becoming empty. This could have devastating social consequences. The importance of logistics only becomes apparent when it doesn’t work and goods do not arrive. We are currently talking about a vision for the year 2050.”

This research area is anchored in the Field of Expertise “Mobility & Production”, one of five strategic foci of TU Graz.
You can find more research news on Planet research. You can receive monthly updates from the world of science at Graz University of Technology via the research newsletter TU Graz research monthly.

tudents can test themselves in the development of robots for industrial applications, such as logistics, with the robotics student team GRIPS (Graz Robust and Intelligent Production System). The team deals with artificial intelligence as well as the representation and processing of knowledge, with robotics as an application area. To be able to compare the developed technologies with others in a standardised way, the team participates in robotics competitions and the RoboCup World Championship. The Logistics category starts, in which fully autonomous robots have to implement production steps intelligently and flexibly. For more information visit the GRIPS-website.