TU Graz and Silicon Austria Labs (SAL) launch the first SAL research labs at an Austrian university and lay the foundation for groundbreaking digital products and processes with joint basic research in the field of electronics-based systems. 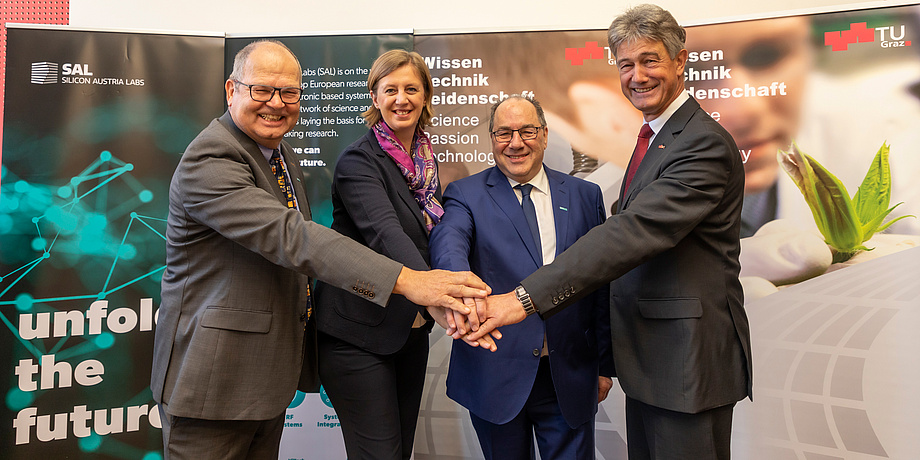 Whether car, smartphone or tablet, today microelectronics is found in almost every electronic device and forms the basis of the Internet of Things (IoT) in which billions of smart devices are networked to form intelligent systems. The electronic components have to be smaller, more powerful and more robust without losing safety and dependability. But how do we guarantee the perfect interaction of these highly complex parts and components? How can risks be avoided as far as possible and confidence in the security of smart technologies be strengthened?

Safety and compatibility are two central pillars in the development of future-oriented products and processes. With the Austria-wide launch of the first two university SAL research labs at Campus Inffeldgasse of Graz University of Technology, teams from TU Graz and SAL will from now on conduct basic research in these areas. In the DES Lab (Dependable Embedded Systems Lab), the safety and dependability of modern computer-based systems are the focus of the scientists. In the EMCC Lab (EMCC and Radio InterOp Lab) researchers from TU Graz and SAL will work on the coexistence and compatibility of future electronic systems. Over the next four years, the two research partners will fund the labs to the tune of approximately 1.5 million euros each.
The Rector of Graz University of Technology, Harald Kainz, is delighted at the launch of the two research labs, in which several institutes and faculties of TU Graz are involved: “Over many years, TU Graz has built up an excellent reputation in the field of 'Information, Communication & Computing' – one of our five Fields of Expertise in research. Our University enjoys an excellent international reputation, especially in the field of security research. We now bring this expertise to the two TU Graz-SAL research labs in both the software and hardware sectors. With the new facilities, we are networking across disciplines in basic research on substantial future issues and strengthening Austria as a research centre for electronics-based systems with international appeal.”

Silicon Austria Labs (SAL) is a European centre of excellence for electronics-based systems and is committed to interdisciplinary research of core technologies. At the interface of science and industry, SAL also relies on extensive cooperation with universities and research institutions at the three SAL locations Graz, Linz and Villach. In the university-SAL research labs, SAL and its partner universities will combine their expertise in the basic research of this key technology. In a joint doctoral programme at TU Graz, Johannes Kepler University Linz, Alpe-Adria-University Klagenfurt and Vienna University of Technology, up to 50 doctoral students will also be researching the most diverse aspects of these future technologies.

SAL managing director Werner Luschnig explains the cooperation model of the “Uni-SAL labs”, which are gradually being established at all SAL locations: “With the new cooperation model, SAL will be working with universities with focused resources on key topics for electronically based systems. Scientists from the University and SAL will work together to develop the basic principles that will later form the basis for new technologies and products on the world market in cooperation with industry and thus contribute to innovation leadership. In this way, we achieve a more direct transfer of scientific knowledge to the economy in our environment and thus create a lever for global competitiveness.” Apart from the cooperation in the Uni-SAL research labs, SAL and TU Graz will also acquire joint research projects in the field of applied research at the interface to industry.

Silicon Austria Labs was founded in 2018 by the Federal Ministry of Transport, Innovation and Technology (BMVIT) together with the provinces of Styria, Carinthia and Upper Austria and the Federation of the Austrian Electrical and Electronics Industry (FEEI) as an international centre of excellence in the field of electronics-based systems with the aim of positioning Austria as a sustainable innovation leader and top research region in this field. In a national network of science and industry, SAL conducts cutting-edge research on microsystems for “smart factories”, “autonomous driving” and for “intelligent power grids”.
Barbara Eibinger-Miedl, Styrian State Councillor for Science and Research: “Microelectronics is a key technology of digitalisation. It will therefore be anchored accordingly in the new Styrian economic strategy. Silicon Austria Labs, a centre of excellence in research, is an important part of this and underlines our position as the number-one research state in Austria. I am extremely pleased that SAL has already established itself at the main location in Graz and that the growth of the centre is progressing. The research labs are a visible sign of this and once again prove the excellence of Graz University of Technology.”
Ingolf Schädler, Chairman of the Supervisory Board of SAL, adds: “This is a major milestone for SAL on its way to outstanding excellence in research.”
SAL will be the third largest research centre in Austria in its final stage of development, and 280 million euros will be invested in the infrastructure over the next few years. The federal government and the three states of Styria, Carinthia and Upper Austria are contributing 140 million euros, with 140 million euros coming from industry. Styria's share amounts to 28.75 million euros. The SAL headquarters is located at TU Graz; research is carried out here and at the Villach and Linz sites. In Styria, SAL will create about 200 new jobs. In a few weeks Silicon Austria Labs will move into its temporary headquarters in the new Electronics Based Systems building at Campus Inffeldgasse of Graz University of Technology. Parallel to this, a separate SAL building will be constructed in the coming years, also on TU Graz’s Campus Inffeldgasse.

Two SAL research labs are being launched at TU Graz. A third lab is being planned and is scheduled to be launched in the course of 2020.
The TU Graz-SAL Dependable Embedded Systems Lab (DES LAB), headed by Bernhard Aichernig, Deputy Director of the Institute of Software Engineering at TU Graz, and Andreas Windisch, Senior Scientist at SAL, is concerned with the dependability of modern computer-based systems. Top computer scientists from TU Graz will be working here together with researchers from SAL on the development of new methods to make intelligent and networked systems safer. To this end, the DES Lab will conduct interdisciplinary basic research in the areas of testing, verification, machine learning, optimisation and hardware-related software development with a special focus on security and dependability. Lab director Bernhard Aichernig explains the challenges as follows: “The possibilities offered by artificial intelligence and networked systems seem almost unlimited – but the widespread use of these technologies is hindered by a lack of dependability. It is important to find practicable solutions here.”
In the TU Graz-SAL EMCC and Radio InterOp Lab (EMCC LAB) under the direction of Bernd Deutschmann, Head of the Institute of Electronics at TU Graz, and Bernhard Auinger, Staff Scientist of SAL, TU Graz and SAL will jointly conduct research in the electromagnetic compatibility of electronics-based systems. Electronic systems often contain a large number of integrated circuits with millions of transistors, highly complex printed circuit boards and a wealth of passive components. The undisturbed interaction of all these components significantly determines the performance and dependability of the entire system. The aim of the joint research activities in the EMCC Lab is to investigate the electromagnetic compatibility of electronics-based systems. Even during the development phase, predictions about electromagnetic interference emission and immunity should be possible in order to ensure the coexistence and compatibility of future electronic systems.

This research area is anchored in the "Field of Expertise" Information, Communication & Computing, one of five strategic research FoE of TU Graz. 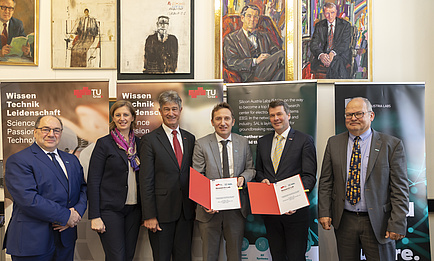 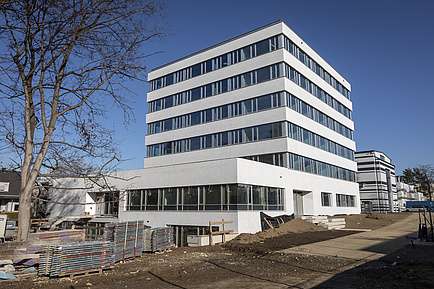 Silicon Austria Labs will soon move into its new temporary headquarters in the EBS building on the Inffeldgasse campus of Graz University of Technology. © Lunghammer – TU Graz 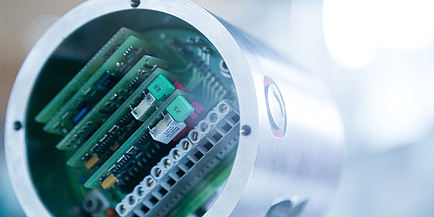 Microelectronics is a key technology of the future, which is just as important for smart factories as for intelligent power grids or autonomous driving. © Oliver Wolf