Orange the World: "16 days against violence against women"

From 25th November to 10th December, Graz University of Technology flags the "Alte Technik", "Neue Technik" and "Campus Inffeldgasse" buildings to show solidarity with the UN Women's Campaign "Orange the World", which calls for an end to violence against women. 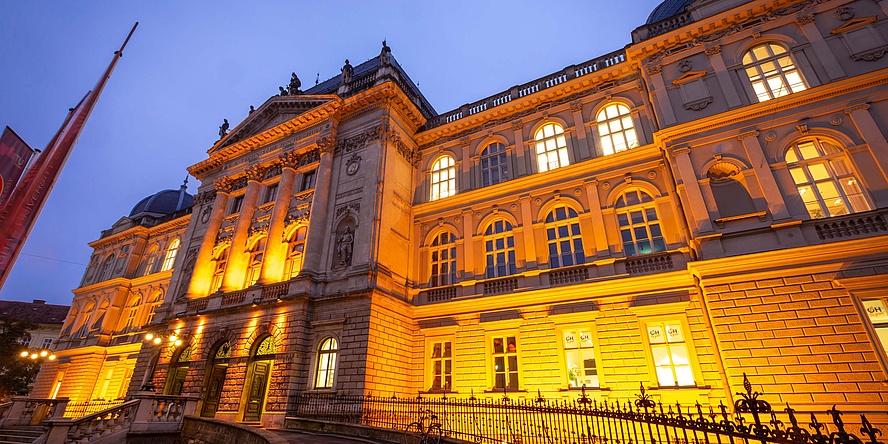 From the end of November to the beginning of December, countless buildings around the world shine in orange light – as a sign against violence against women. This year, the Alte Technik in Graz will only be illuminated in the photo; for energy-saving reasons, the building will be flanked by orange flags.

Worldwide, every third woman is affected by violence. Also in Austria, every fifth woman still experiences physical and/or sexual violence after the age of 16. A strong and visible sign against violence against women is set every year by the worldwide UN Women Campaign "Orange the World – Stop Violence against Women and Girls". From 25th November to 10th December this year, buildings around the globe will be illuminated in orange. A glaring call to look and act.

TU Graz joins the Austria Campaign 2021 of "Orange the World" under the leadership of UN Women NKÖ, Soroptimist International Austria, Ban Ki-Moon Centre for Global Citizens and HeForShe and is colouring the "Alte Technik", "Neue Technik" and "Campus Inffeldgasse" buildings in orange light.

Gudrun Haage, head of the Office for Gender Equality and Equal Opportunity and chairperson of the working group for equal treatment issues at TU Graz: "We welcome the inclusion of all Austrian universities in this year's campaign against violence against women. It is always relevant to show the topic in a university context and to place it in the bigger picture."

Daniela Fuchs-Hanusch, deputy chair of the working group for equal treatment questions adds: "The issue is all the more important because it is sadly becoming increasingly clear that the covid 19 pandemic is once again exacerbating inequalities and abuses and that the number of women affected by violence has risen."

Do you notice violence against women or girls in your environment?
LOOK - ACT
0800 222 555 - Women's helpline against violence
around the clock, anonymous, free of charge, multilingual!

More information on the campaign at www.orangetheworld.at (German only)