Taking a Closer Look at the Atmosphere

A physicist at TU Graz is developing a new method to make the processes in our atmosphere visible. If we think this through, it opens up new opportunities for environmental research – and perhaps even potential for counteracting climate change. 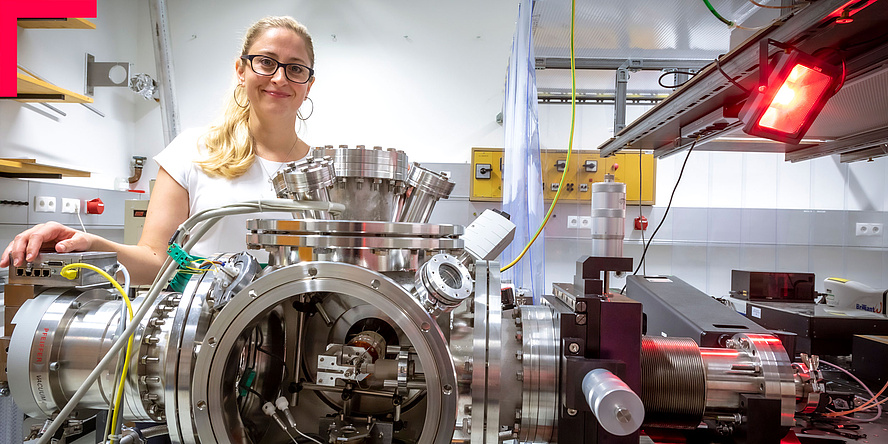 The ozone layer in the Earth's stratosphere "swallows" UV rays and in this way protects humans and animals from radiation damage. Near the Earth, in the troposphere, ozone is actually harmful and one of the worst greenhouse gases. So the effects are highly diverse and ozone is also just one example of many – but the composition of the atmosphere and the processes in it have a major impact on our climate and our environment. But we still know far too little about this today. With the development of a new type of laser beam in the "Elfis" project by researcher Birgitta Schultze-Bernhardt at Graz University of Technology (TU Graz), we could soon be able to "look inside" more closely. And in the future, we could even find out what we can actively influence. The project title "Elfis" stands for "electronic fingerprint spectroscopy", because the individual absorption properties of the gases are their "fingerprint", so to speak, says the expert.

The "swallowing behaviour" reveals a lot

“All matter swallows certain parts of light. And all matter does it differently depending on its individual properties. That's why we can use light to find out more about a particular kind of matter – and of course that matter can also include gases," explains Birgitta Schultze-Bernhardt, who works at the Institutes of Experimental Physics and Materials Physics at TU Graz. Her research goal is to develop a new spectroscopy method in the UV range. With this method and in cooperation with researchers from the Institute of Geodesy at TU Graz, she is now taking a close look at our atmosphere. Keyword teamwork. Experts in climate research from the Univer-sity of Natural Resources and Applied Life Sciences, Vienna, are also involved. Finally, the findings from Graz are of great interest with regard to climate change.

A laser that directly generates UV light does not yet exist. It is interesting for the following reason, among others. UV light, which is also emitted by the sun, sets various chemical reactions in motion that also happen in our atmosphere. A UV laser could also trigger these processes. What's more, it could be used to collect a lot of information about the gas samples all at once, as the laser emits many different colours at the same time. "With a gas, this information includes very fine absorption lines that you first have to recognize. In the framework of the EU-funded Elfis project, we are achieving this through a very high spectral resolution," says the TU Graz physicist, emphasizing the innovation.

The chemical reaction triggered by light is also typically incredibly fast. More precisely, in one millionth of a billionth of a second. With "Elfis", however, you can now also create these processes in a kind of slow motion and thus make them comprehensible.

These challenges are interesting for basic research. But it provides the impetus for much more: "We are developing a method that can be used for questions relevant to everyday life. Specifically, we can shine our laser system into the atmosphere of our Earth. With the high resolution, we look at what is happening there and also whether we can influence anything," says Schultze-Bernhardt about her FWF START project. And what exactly? As an example, she mentions the determination of NO2 concentrations and ozone in the atmosphere. Likewise iodine methane, which is emitted by algae, and formaldehyde, which is more prevalent in cities with a smog problem. In other words, essential environmental factors can thus be at least examined or even much more closely. The potential of the method is enormous and could contribute significantly to understanding as well as combating climate change.

Studying physics at Graz: Incidentally, relevance to everyday life was also the reason why Birgitta Schultze-Bernhardt decided to study physics. "I've always liked physics because it can explain such a wide variety of everyday phenomena – from lightning to microwaves to 3D cinema." And so, in connection with the "Elfis" project, there are also a wide variety of possible uses. Together with Alexander Bergmann from the Institute of Electronic Sensor Systems at TU Graz, Schultze-Bernhardt wants to investigate how fine dust aerosols, which are still too small to be registered by a detector when they form, can be detected earlier using the optical method. "We have seen what potential the method has in other areas – for example, it can detect the finest concentrations in the air we breathe. There could also be starting points in the direction of cancer research if you consider that you can distinguish between healthy and diseased cells because their absorption is different."