TU Graz, the University of Leoben, the Austrian Fire Brigade Association and ILF Consulting Engineers have investigated the effects of e-vehicle fires in tunnel systems. The results are reassuring for passenger cars, but not for commercial vehicles. For the latter, as well as for fires in multistorey car parks, further investigations are urgently needed. 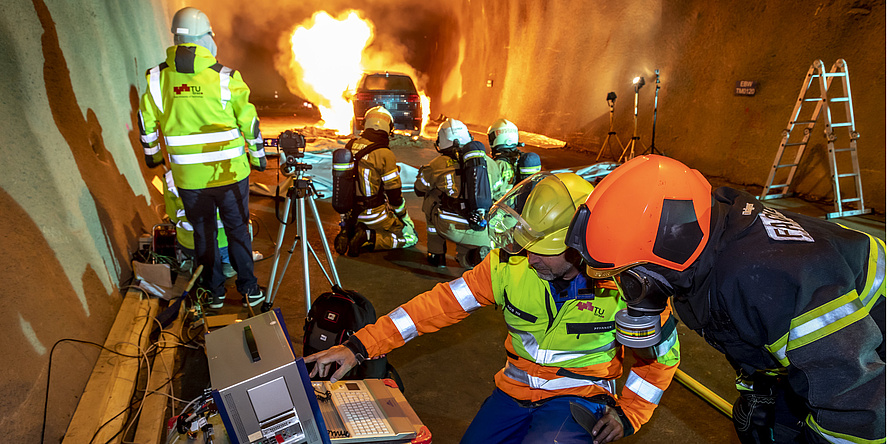 One of the findings of the experimental fire tests: If an e-vehicle burns in the tunnel, it becomes hotter, but not fundamentally more dangerous in the tunnel. © Lunghammer - TU Graz

The actual potential danger in the event of an accident with an e-car is still relatively unknown, but unsettling images of e-vehicles on fire are already widespread. We know that the energy storage systems of e-vehicles based on lithium-ion technology behave differently than conventional car engines in the event of a fire. But what exactly happens when e-vehicles catch fire in a tunnel? How hot does it get and what gases are produced? What dangers are there for people who are in the tunnel at the time of the accident? What risks are emergency personnel exposed to? What damage is there to the tunnel infrastructure? And what is the most efficient way for fire services to extinguish a burning e-vehicle in a tunnel?

In the FFG-funded project "BRAFA – Fire Effects of Vehicles with Alternative Drive Systems", Graz University of Technology (TU Graz), the University of Leoben, the Austrian Fire Brigade Association and the consulting firm ILF Consulting Engineers Austria, supported by ASFINAG and the Federal Ministry for Climate Protection, Environment, Energy, Mobility, Innovation and Technology, investigated the safety-relevant effects of fires involving battery electric vehicles (BEVs) in road tunnels and evaluated methods for fighting fires. The results of the comprehensive experimental and numerical investigations provide valuable insights, but above all one thing: reassurance. On the basis of these investigations, the potential risks are not to be assessed as significantly more critical than in the case of fires in passenger cars with conventional combustion engines. "Austrian tunnel systems are fit enough for the challenges posed by burning e-vehicles," concludes Peter Sturm, professor at the Institute of Internal Combustion Engines and Thermodynamics at TU Graz.

While the previous state of knowledge was based on tunnel fire tests with individual battery cells and small battery packs, and the potential risk of entire burning cars was derived from this, the project team gained new knowledge from large-scale real fire tests for the first time.
In the new tunnel research centre "Zentrum am Berg" of the University of Leoben (director: Robert Galler, Professor of Subsurface Engineering), battery modules as well as three electrically powered and two diesel-powered vehicles were deliberately set on fire. The vehicles – compact cars, SUVs and vans – were partly new cars built in 2020 and equipped with the latest lithium-ion battery technology available on the market.

Researchers and the fire brigade initially found themselves in a conflict of interests during the project's fire tests. The fire brigade wanted to extinguish the deliberately caused fires as quickly as possible, whereas the researchers were concerned with collecting data during the fire. As a compromise solution, extinguishing attempts were only started after an unhindered fire time of ten minutes. "That is also roughly the escape time and the time until the emergency services arrive. We were able to gain valuable data in those first ten minutes, after that it was the fire brigade's turn," says Peter Sturm.

More than 30 temperature sensors were used to measure the heat release rate, i.e. the fire load of a vehicle. The fire load of a conventional car is around 5 megawatts (MW), or roughly equivalent to a burning stack of 25 wooden pallets. The heat release rate of the burning e-vehicles in the tunnel, at 6 to 7 MW, was somewhat higher than that of the diesel-powered comparison vehicles, but this does not entail any new risks or dangers. In comparison, the fire load of a conventional truck is around 30 MW – and tunnel systems are also designed for this. "It does get a little bit warmer when e-vehicles burn, but it doesn't make it fundamentally more dangerous in the tunnel. The measured temperatures in the escape area are below the 60 degree Celsius limit for all fire tests. It's not a pleasant temperature, but escaping and firefighting are still possible," sums up Peter Sturm.

The only exception is if there is a spontaneous reaction in which the entire battery is fully on fire at once, a noticeably higher heat release of up to 10 MW can be expected over a few minutes. "However, we deliberately induced this spontaneous reaction in order to be able to investigate this worst case scenario. In the real case, a so-called thermal runaway occurs in the battery, in which the overheating and the fire spread from one cell to the next like a chain reaction. That's why such battery fires also last a long time," reports Peter Sturm.

Emitted gases and heavy metals were also the focus of the project and were collected and measured using targeted air extraction and suspended fleece blankets. Additionally, higher amounts of hydrogen fluoride and carbon monoxide were detected in the fires of the e-vehicles. "However, the thermally induced smoke stratification in the tunnel causes these highly concentrated fire gases to collect predominantly in upper areas of the tunnel and thus outside the area relevant to humans. This means that the escape routes are not affected," explains Peter Sturm. But as an afterthought: "A large part of the comparatively low risk in road tunnels is due to the ventilation systems. These do not exist in multistorey car parks, for example, or at least not to a comparable extent. This means that fires involving e-vehicles in garages are a different matter in terms of danger and urgently need to be investigated more closely. In any case, our measurement results indicate a serious hazard."

Since the "Turismo" risk model currently used in Austria, like models in other countries, completely excludes the fire of battery-electric vehicles, the safety risk for people in the tunnel was also calculated as part of the project. Bernhard Kohl from the project partner responsible for risk analyses determined that in the extreme case – i.e. when there are only electric vehicles in the tunnel – the overall risk increases by about 4 per cent, and the fire risk by about 12 per cent compared to 100 per cent combustion engines. However, it must be taken into account here that it is difficult to derive general conclusions on the basis of these few fire tests. For the structure and materials of the tunnel structure, the drive type of the burning vehicle makes no relevant difference. Concrete damage due to spalling is to be expected in fires of commercial vehicles in both vehicle categories; the damage pattern is roughly the same.

Flame-smothering extinguishing blankets do not add any value from the moment the fire spreads to the battery. The reason for this is the strong flames near the ground, which make it extremely difficult to cover the entire vehicle tightly with the fire blanket and the oxygen self-sufficiency of the battery. The use of extinguishing lances that inject water directly into the battery housing, on the other hand, has proven to be very effective. However, handling the lances is complicated and not without danger, so this method requires special training for the emergency services.

The extinguishing water used to fight the fire showed increased heavy metal contamination, especially with nickel. "It therefore goes without saying that the contaminated extinguishing water collected in the retention basin is more expensive to dispose of," says Günter Rattei from ASFINAG.

Despite the many lessons learned, project leader Peter Sturm emphasizes that further research is more than desirable. "The project budget of 250,000 euros left us very little room for manoeuvre." The fire effects of battery-electric commercial vehicles – buses and trucks – could thus only be scaled up by means of numerical simulations based on assumptions about fire development, fire duration and pollutant release. There is currently no robust metrological verification for these assumptions. Comprehensive fire experiments in large-scale tests would therefore significantly improve the quality of the information. The same applies to the concrete danger of electric vehicle fires in multistorey car parks. "Despite all the joy about the advance of alternative drive systems, such safety-relevant 'homework' must not be neglected," says Peter Sturm, appealing to legislation and research funding.

At TU Graz, this research is anchored in the Field of Expertise "Mobility & Production", one of five strategic research foci. 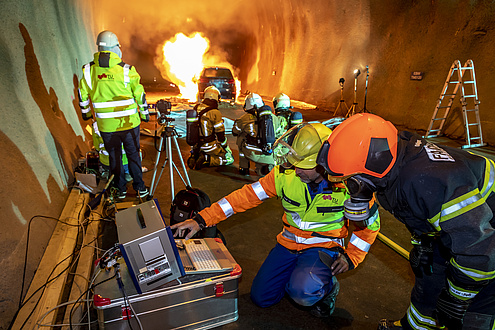 One of the findings of the experimental fire tests: If an e-vehicle burns in the tunnel, it becomes hotter, but not fundamentally more dangerous in the tunnel. © Lunghammer - TU Graz 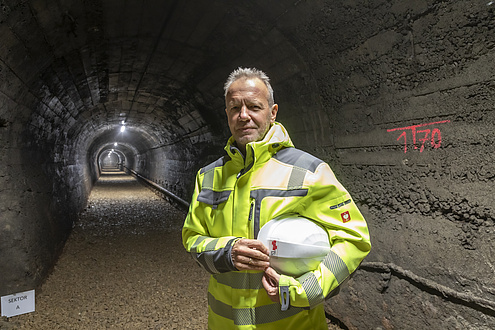 Project manager Peter Sturm is responsible for the area of "Transport and Environment" at the Institute of Internal Combustion Engines and Thermodynamics at TU Graz. © Lunghammer - TU Graz 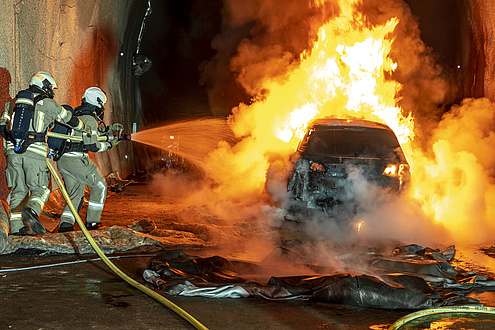 In the course of the project, the fire brigade was able to test different extinguishing methods for burning e-vehicles in tunnels. © Lunghammer - TU Graz