The ”Born Global Champions” award was given to 44 young Austrian companies – amongst them the TU Graz spin-off AR4.io – by the Austrian Federal Economic Chamber. 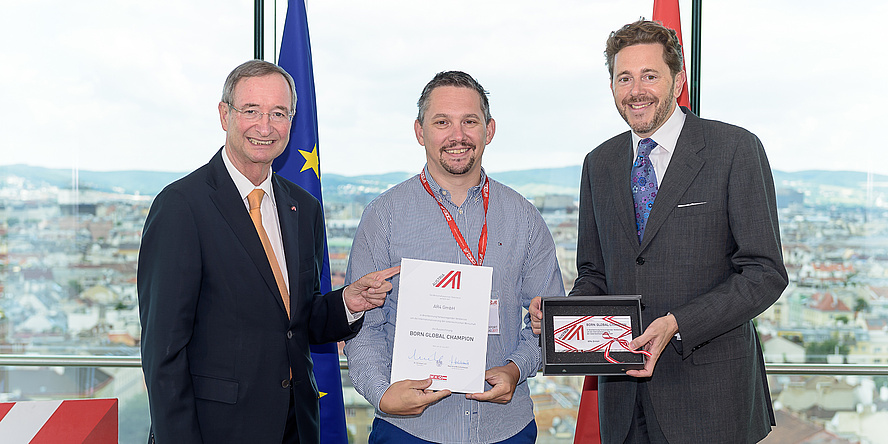 Christoph Leitl, President of the Austrian Federal Economic Chamber, Clemens Arth, CEO of AR4.io and Austrian Federal Minister of Economics Harald Mahrer.
The prizewinners all have several things in common: they were founded in 2012 or later, offer innovative products and services, and have demonstrated rapid international growth. 44 young Austrian companies were honoured with the Born Global Champions award from Advantage Austria, Austria’s official trade promotion organisation of the Austrian Federal Economic Chamber. The award ceremony took place on Monday, June 26th, during the Export Day 2017 organised by the Vienna Chamber of Commerce.

Amongst the prizewinners is AR4.io, a spin-off of TU Graz specialising in augmented reality solutions for industry. CEO Clemens Arth, senior researcher at the Institute for Computer Graphics and Vision at TU Graz, set up the company in 2015. Together with his team, he has been developing augmented reality technologies that can be used for training and problem solutions in industrial environments. In the future, for example, sensitive maintenance work on technical devices could be performed by a person who is adequately skilled but does not have special know-how. The smart glasses he or she is wearing recognize all the parts of the equipment including the spare parts and indicate the correct working procedure.

Another Born Global Champions prizewinner is the start-up Holistic Imaging founded in 2012 and specialising in big-geodata production, handling and visualisation. The masterminds behind the company are Matthias Rüther, staff member of the Institute for Computer Graphics and Vision, and Philipp Meixner, a former doctoral student at the Institute.
In the interview, Clemens Arth talks about his company AR4.io and augmented reality.
Clemens ARTH
Dipl.-Ing. Dr.techn.
AR4 GmbH
Strauchergasse 13
8020 Graz, Austria
Phone: +43 650 268 72 90
clemens@ar4.io
www.ar4.io