TU-Graz experimental physicist Birgitta Schultze-Bernhardt spent her school years at an all-girls grammar school. She explains in the interview why this was a big advantage to her career in physics. 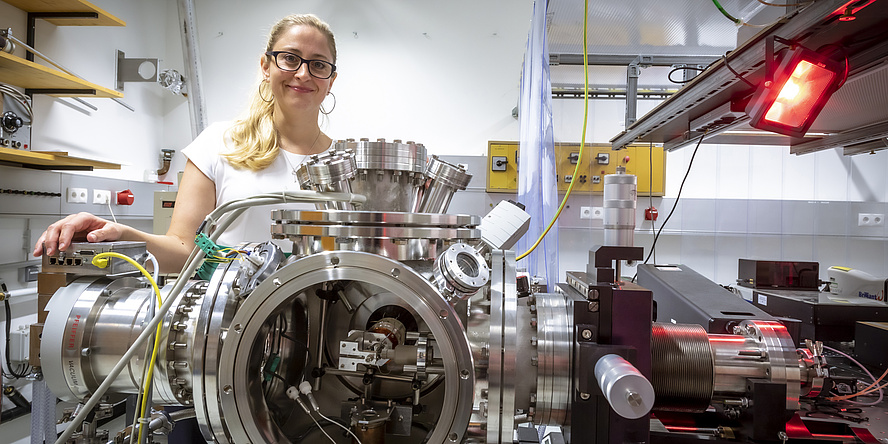 News+Stories: You have made a career in experimental physics. After your studies at LMU Munich, you made stops in California, TU Munich and Jena and have now been working at Graz University of Technology (TU Graz) for two and a half years. Why did you choose physics?

Birgitta Schultze-Bernhardt: I found natural sciences the most interesting subject of all throughout my school years. For a long time I wanted to study mathematics, but because physics seemed more relevant to my everyday life in the last two years at school, I finally changed my mind.

Have you ever regretted your decision?

Schultze-Bernhardt: No, never (smiles). I am still firmly convinced today that this was exactly the right way to go.

In a series of interviews starting on March 8, Graz University of Technology will focus on the career opportunities and challenges of women in studies, research, teaching and business. Women at different career points talk about their personal experiences. Click here for the interviews with computer scientist Johanna Pirker, electrical engineer Lia Gruber and TU Graz graduate Esther Lind.

You spent your school years at an all-girls school. Your interest in natural sciences and especially physics contradicts the stereotype.

Schultze-Bernhardt: Yes, I went to a grammar school for modern languages – the “Englische Fräulein” in Munich. There were actually even nuns present (laughs). And I think that was the best way to go. Because I was able to pursue my interests in a completely neutral way, unbiased by any clichés. What I was interested in was never questioned among my teachers or classmates. I know from stories that the tone in physics classes, for example, was quite different in mixed classes. So I was completely free to choose.

Did your classmates also experience it that way?

Schultze-Bernhardt: I would like to assume so. But it was not like that. Although we were all able to decide freely, I was the only one who chose to study physics. I thought that was a great pity.

How did you deal with the fact that you were one of very few women in your studies?

Schultze-Bernhardt: I never struggled with that. I didn’t question it at the time. But what I actually had to learn was to represent my knowledge with a certain confidence. It happened several times that a male fellow student simply asserted something and I was completely impressed how quickly he understood what I had not yet understood at all. Often it quickly turned out that he didn’t know so much after all (laughs). I was certainly easier to impress than other female colleagues.

WomenUniverse, the alumni women’s network of TU Graz, is a forum for graduates, students and all women interested in the connection between science and business. Regular activities (live and online) offer women at different stages of development in their professional and career planning the opportunity to exchange ideas in a protected environment, to make contacts and to stay a bit closer to TU Graz.
If you are interested, please register via frauennoSpam@alumni.tugraz.at. More information on the network and current events can be found on the WomenUniverse website https://alumni.tugraz.at/unsere-aktivitaeten/womenuniverse.

In your year of studies around 20 per cent were women. Did it stay that way throughout your studies?

Schultze-Bernhardt: No, the number actually gradually decreased. But that was very natural and had little to do with gender in my opinion. A lot of men also dropped out of university. That’s just the way it is in physics – many people start but realize after a few semesters that it’s not for them after all. In my first study group, for example, there were four women and two men. Both men eventually dropped out of their studies – one of them because he preferred to study computer science.

Did you notice any particular obstacles or advantages that you had in contrast to your male colleagues?

Schultze-Bernhardt: No, not at all. I just noticed certain things. For example, during my doctoral training, almost all of my male fellow students became fathers. It just happened that way to them. But none of the women started a family at that time. I was not ready for that at the time either. Seen realistically, it would not have been organizationally possible with all the overtime in the evenings and at weekends.

You are now a successful physicist and have three children.

Schultze-Bernhardt: Yes. Looking back, you might think that it was just very well planned, but of course there was also luck involved. For a long time, I had a hard time with the academic system because the succession of temporary post-doc contracts didn’t offer the security I would have liked. But today I see this differently. I realized that having a family is also compatible with the necessary flexibility in my job. Our three children were born in three different countries. So that works too (laughs). And if the academic system had been different, I would never have applied for those jobs, had those experiences, and become as independent as I am today, or had the ideas for my research that I have today.

I realized that having a family is also compatible with the necessary flexibility in my job.

Did you make use of any advisory services?

Schultze-Bernhardt: To be honest, I never sought out any special offers for women. It is important to me that both genders are treated as equally as possible. What I would find great, however, would be a kind of mentoring programme where women are supported with very specific questions.

At the Faculty of Mathematics, Physics and Geodesy at TU Graz, we have just had an intensive discussion about how to get women inspired to study and pursue a career in science, if they are interested. I have come up with a series of events where doctoral students can report on their work and interested parties can ask questions. I think things like that make a lot of sense.

What has changed for women in science?

Schultze-Bernhardt: Childcare is of course a very big issue, especially for women. And fortunately, there are now a range of possibilities. For example, the Nanoversity at TU Graz, which should have even greater capacities. Because the facility is wonderful.

At conferences, too, many things are different today compared to how they used to be. A few years ago, my husband and I attended the same laser conference. With our then one-year-old sleeping son, we were not even allowed into the corridors outside the lecture halls. At one of the last conferences I attended, a woman was even able to attend a lecture with her young daughter. It doesn’t have to be a problem. That has changed a lot. The nasal groans alone have largely disappeared (laughs). This is a very beautiful merging of the areas of life that are sometimes not so easily separated.

Would you like to be a role model for young women yourself? Is such a thing necessary?

Schultze-Bernhardt: When I was a student, I didn’t even notice that there were no women physics professors. I didn’t question it and I didn’t think about it. And yet I went down this path. So it’s obviously not absolutely necessary. But if I can give someone guidance and help with my experiences, then I am very happy to do so. It is a very nice development that there are now women of every academic age present, doing their work and doing it well and with pleasure. Hopefully, the rest will take care of itself.