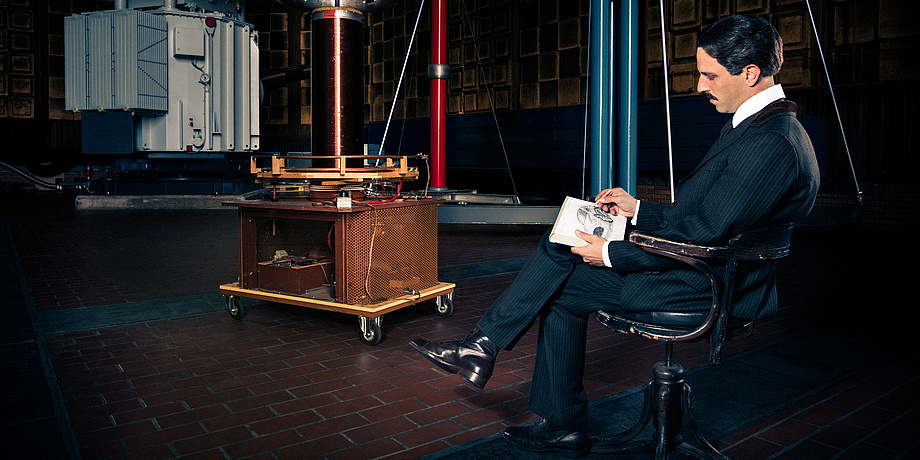 The Tesla transformer in the Nikola Tesla Laboratory of TU Graz, staged with a masqueraded actor by Mateo Moém.

Around 1870 the radiance of the Technical College of Graz was felt way beyond the borders of Styria. In those days, especially talented students interested in technology from north Italy and southeast Europe found their way to the Styrian provincial capital. The most gifted of them was without a doubt Nikola Tesla.

Born in Smiljan on the Croatian military border on 10 July 1856, the son of Serbian Orthodox priest Milutin Tesla and his wife Georgina, Nikola Tesla graduated from the Higher Real Gymnasium at Rakovac and studied at the Technical College of Graz from September 1875 to the end of 1877.

Above-average start to his studies

He began his studies with the utmost keenness, working regularly from 3 in the morning until 11 at night, a fact reflected in his grades. With one exception, he achieved the grade of “excellent” in all his exams; only his last exam “On the congruity of numbers” was graded “good” by Professor Rogner. Tesla valued his remarkably capable teachers highly, and the professors soon came to recognise Tesla’s genius. Over the years, only once did he come into conflict, and this was with Professor Pöschl in 1877 over the operation of a new Gramme dynamo. It is possible that this was the crucial point that kickstarted the development of Tesla’s genius. 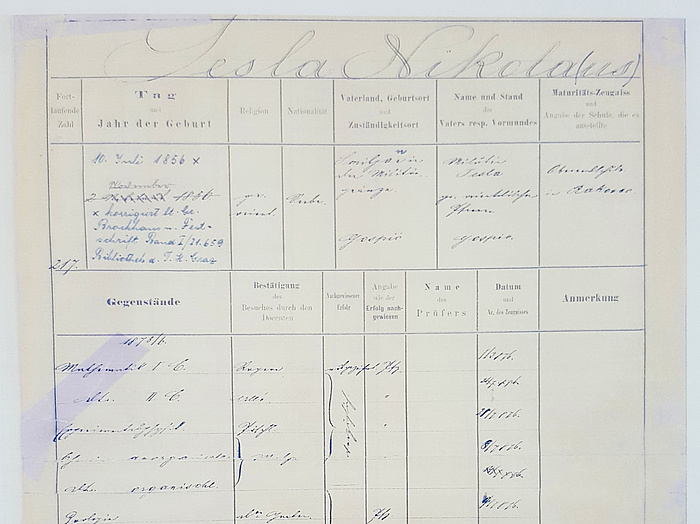 Café instead of library

In the late autumn of 1877, so the story runs, he began to gamble passionately and liked to spend his time in a café near the Joanneum botanical garden, a popular nightly meeting place for Graz students. Tesla’s room mate, Kulisic, later reported that gambling, smoking and drinking excessive amounts of coffee began to dominate his life. Soon Nikola Tesla spent more time in cafés than in the library. In his third year of studies, he did not sit any exams, and it is said that for this reason he was excluded from studies.

At the end of the second year, Nikola Tesla’s scholarship was withdrawn by the military border authorities due to unjustified interruption of his studies. Tesla’s student protocol states: Struck off due to non-payment of teaching fee for the first semester of 1877/8.

Tesla’s father, Milutin, tried to get to the bottom of things regarding his son’s behaviour, who apparently justified himself by saying that he was ill and being treated in a Graz hospital. At least this is what Milutin Tesla told the authorities on the military border. On being asked, however, Nikola Tesla informed the provincial office of finance in Graz that he had never been treated in a local hospital.

From Graz to New York

From Graz for almost the whole of 1878, Nikola Tesla tried to obtain another scholarship to continue his studies in Vienna, Prague or Brno. He finally left Graz between September and November 1878. After that he went to Maribor, in 1880 to Prague and in 1881 to Budapest, where he came into contact with the former general representative of the Edison company in Austria-Hungary. The latter sent Tesla on to Paris, and from there he found his way finally to New York in 1884, where he started working for Thomas Alva Edison.

Nikolaus Juch is only 15 years old, but is already studying electrical engineering at Graz University of Technology - next to school. You can read how he is doing in the section Young talents on Planet research.

And Patrick Schrey explains why studying electrical engineering is definitely worthwhile in his blog post on microelectronics.