Nikolaus is 15 years old and is studying for a bachelor’s degree in Electrical Engineering. He’s one of three young students who are currently attending lectures at TU Graz while still at school. 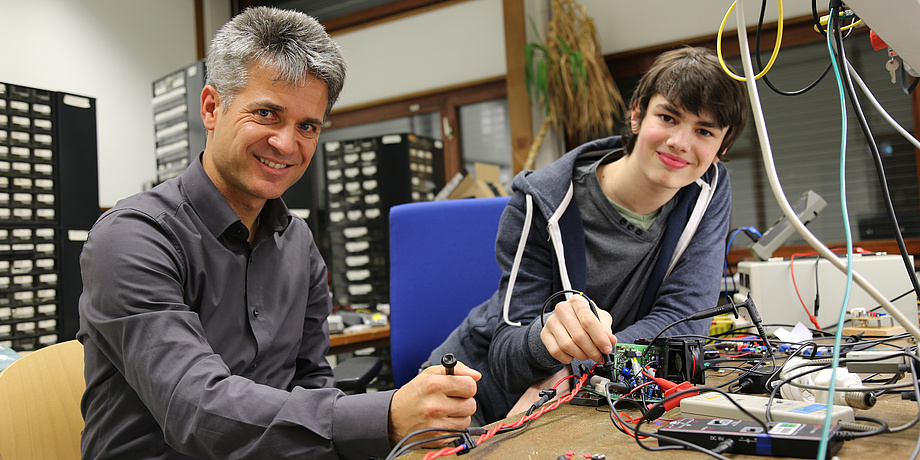 The young and gifted student Nikolaus Juch with Bernd Deutschmann in the Electronics lab.
“His name is Nikolaus and he spends his time doing electronics – we just had to keep him at the Institute,” says Bernd Deutschmann with a grin, head of TU Graz’s Institute of Electronics. Two years ago the then 13-year-old Nikolaus Juch applied to the Institute and didn’t only leave his CV behind as a lasting impression. Today Nikolaus is enrolled as a non-degree student at TU Graz and is working – like his namesake – on a Tesla coil.

A Tesla coil is a transformer invented by Nikola Tesla which produces high-frequency alternating currents. The original goal of the inventor was to transmit electrical energy wirelessly.

News+Stories: How did it happen that such a young pupil came to study and work with you?

Bernd Deutschmann: Two years ago Nikolaus wanted to do a one-week taster at ours in a school project at the “Modellschule Graz”. He applied properly with a cover letter and CV. We were very curious because he described extremely well all the things he had already built himself. It’s not every day that a young person grapples with electronics so intensively. Our new students always get a circuit board in the first lab exercise on which they are supposed to solder components and make a small circuit. Usually they take half a day to carry out all the soldering work and another half day to understand everything they’ve done. I also gave this lab exercise to Nikolaus – actually as a programme for the whole week. One hour later he came back from the student lab – the circuit was working and he was able to explain everything in detail. I was standing there quite embarrassed because the work load for the first week had been used up in the first morning (laughs). 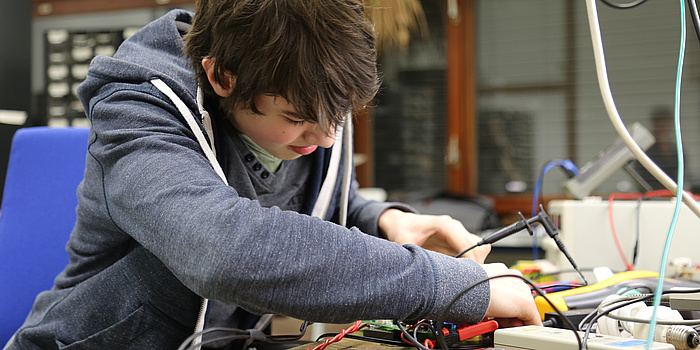 Nikolaus Juch took apart everything he could get his hands on at home to find out how it works. Today he works in a protected lab environment.
Nikolaus Juch: After that week I was allowed to work at the Institute in the summer. My next task was to check old equipment which was going to be sold. Then Bernd had the idea that I should build a Tesla coil which could play music. And it just continued like this. Today I spend nearly each free minute after school at the Institute and I’ve been enrolled as a student for one year. I’m completing my second semester at the moment. Bernd Deutschmann:The idea for the degree programme came to us when Nikolaus was in my office one day while I was grading exam papers from the Electronic circuit design I course. Just for fun I gave him the question sheet to see how much he could answer off the cuff. Except for two questions, he could answer them all at first go. If he carries on like this, he will have completed half the bachelor’s programme by the time he does his higher school leaving exams.

Nikolaus Juch is enrolled at TU Graz and supported by the „Pupils at University“ programme of the ÖZBF. The latter supports gifted and talented pupils who haven’t yet taken their higher school leaving exams by enabling them to study at an Austrian university parallel to their normal school education. There are currently 84 of them in Austria, and 19 of them are in Styria.

Mr Juch, how did you develop an interest in electronics?

Nikolaus Juch: My first recollection is of a simple electronic kit which I got as a present when I was a child. Then I started to take everything apart and examine it. For instance, discarded electronic devices which my grandfather brought home from the power station where he worked. I build things myself a lot at home. For example, I built a CNC milling machine which I can use among other things to produce circuit boards myself. I made a small Tesla coil before I started coming to the Institute of Electronics. I also made another thing which was quite cool – a device which gets magnetic objects to hover using an electromagnet. This is actually not very simple because normally magnets attract everything magnetic, which then sticks to the magnet and doesn’t hover. Using some control engineering and a hall sensor I managed to control the electromagnet in such a way that the object evened out at a particular distance and hovered underneath the electromagnet.

At TU Graz, apart from Nikolaus Juch, there are two other gifted pupils attending courses parallel to their school education in the present academic year. They are currently enrolled as non-degree students at TU Graz and will only have their exams accredited to their bachelor’s programme after they have passed their higher school leaving exams. Visit our Website for more information.

What about your environment, your parents and school – what do they say about your studies?

Nikolaus Juch: Everyone at school supports me – especially the principal. She can put it in the annual report so she’s very enthusiastic (laughs). My French teacher, for example, asked me no vocabulary questions during the week I had to prepare for the TU Graz exam. I’m lucky in that I find school generally easy and I don’t have to study a lot so long as I’m attentive in class. So I don’t have any problem when I spend some afternoons at the Institute, in the lab or in courses. Bernd Deutschmann: I don’t know if your parents told you but they were almost relieved when we talked together (laughs). You’ve always tinkered around at home, but here at the Institute all the safety regulations have to be met and there are always experts on hand who make sure nothing untoward happens. And students' activities at the University are insured.

We are still very thankful to Bernd Deutschmann and the institutes staff for making Nikolaus feel welcome from the very start and giving him the opportunity to do his work in a safe space surrounded by likeminded people.” – Nikolaus parent´s

At the moment you’re working together on a singing Tesla coil – so what’s it about exactly?

Nikolaus Juch: Flashes come out of the coil at the top and produce sound waves in the air due to the plasma. If you turn the Tesla coil on and off in a particular tact, you can modulate the frequency of the sound waves, and if you do it right, you can sort of hear the flashes producing sounds. In the meantime it works really well and it produces proper music. 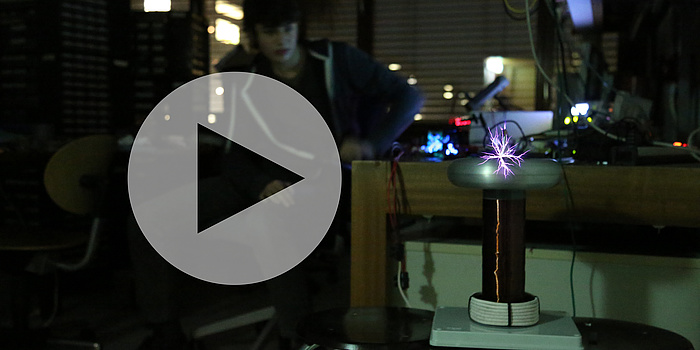 Bernd Deutschmann: The project is a good way of giving students an understanding of electronics live – because you can see sparks and as in this case – even hear music. Also, it’s also about disseminating knowledge in the field of power electronics. We use the latest power semiconductors to actuate the coil – some of them are not yet on the market and have been provided so we can conduct tests on them. We try to optimise the actuation, the printed circuit design and other components in such a way that this all results in a final product which is as free of interference as possible. If there is too much interference (and a Tesla coil produces a lot), this can result in errors in actuation and the power semiconductors can be destroyed. This is one of the research areas of our Institute, among others: How can I build electronic systems reliably? And we’ve got other plans for the Tesla coil. Every two years we organise a large expert conference at TU Graz on the topic of electromagnetic compatibility. And at the next event in 2019, we hope that the large Tesla coil will hold the opening address at the evening event in the Nicola Tesla Lab. And I am very confident that it’ll succeed. If it can already play music, then it should also be able to speak. Even today you can hear very clearly what the coil has to say (laughs).

Nikolaus Juch goes to the “Modellschule Graz” which focuses on artistic education. Also, he is enrolled as a student at TU Graz and works in his free time on a singing Tesla coil. He also has time for a second hobby in addition to electronics – fencing.
Bernd DEUTSCHMANN
Univ.-Prof. Dipl.-Ing. Dr.techn.
Institute of Elektronics
Inffeldgasse 12/I | 8010 Graz
Phone.: +43 316 873 7520
bernd.deutschmann@tugraz.at