humans, machines and the atmosphere of the Swiss competition

David Steyrl of the Mirage 91 student team from TU Graz describes his impressions of the Cybathlon in Zurich – the competition at the interface between man and machine. 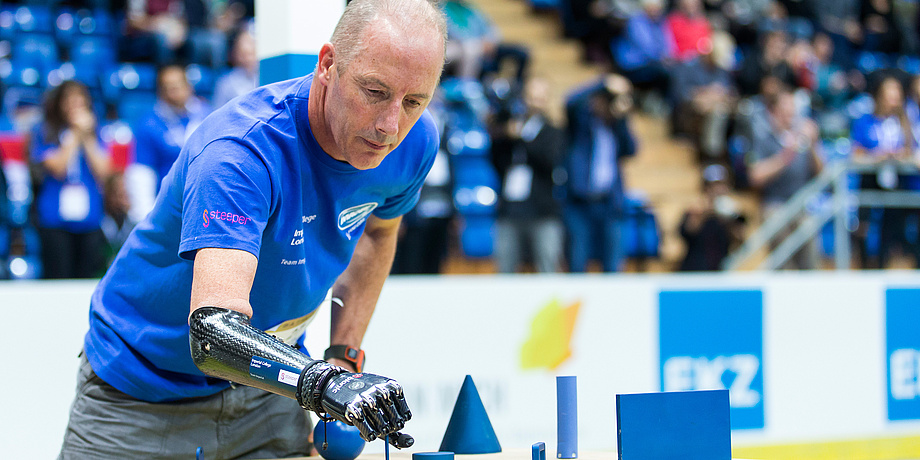 At the Cybathlon, individuals with physical disabilities competed in six demanding disciplines at the Cybathlon, e.g. in the Powered Arm Prothesis Race, as seen in the picture. The TU Graz team started in the Brain-Computer Interface Race.
Two full years of intensive preparations are coming to an end. Today is the day when we have to show how far these two years have brought us. Our brain-computer interface has to harmonise with the pilot. It’s time to concentrate. Not an easy job in the sold-out SWISS Arena and the amazing joyful anticipation of the Cybathlon experience!

The world’s 1st Cybathlon takes place in the SWISS Arena in Kloten near Zurich. A contest in which persons with disabilities compete against each other in a sports competition supported by machines. The Arena is restlessly sold out – 4,600 people are watching live and ensuring the right atmosphere. Radio and television are besieging the area and there are a total of 150 journalists at the location. Massive interest!

Yesterday we inspected the Arena and the preparation rooms. We tested our equipment for the last time – everything’s ok for now. We have an early beginning today – getting up, breakfast and then we’re off. Inside, the feeling of expectant anticipation is palpable. Everywhere you can see acquaintances and fans of the respective teams, who have come from all over the world. 30 nations are represented here, 66 pilots with their own teams. And we’re here, too. Amazing! A highlight to make you grin – the opening ceremony with Alpine horns. Yes, we’re in Switzerland! Then the first competition begins. Arm prostheses show their skills at hanging out the washing and their strength at carrying boxes. Wheelchairs overcome steps and ground obstacles. Exoskeletons help paralysed persons to walk upright again. And then our race materialises: it’s time for the BCI racing teams.

Just think of NOTHING 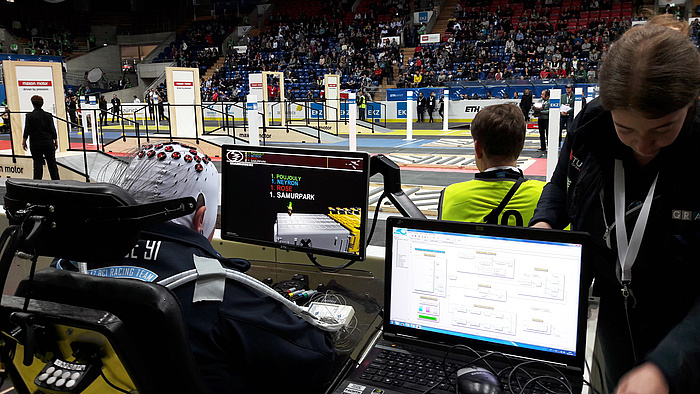 The pilot Gerhard Kleinhofer and the team Mirage 91 highly concentrated at the Brain-Computer Interface Race.

It doesn’t run altogether according to plan and we finally achieve 11th place. We held our disappointment within limits though, since what place you get in this competition is incidental. We students learned so incredibly much. And not only about brain computer interfaces and what international exchange between research and application can be like. But about interpersonal relationship. 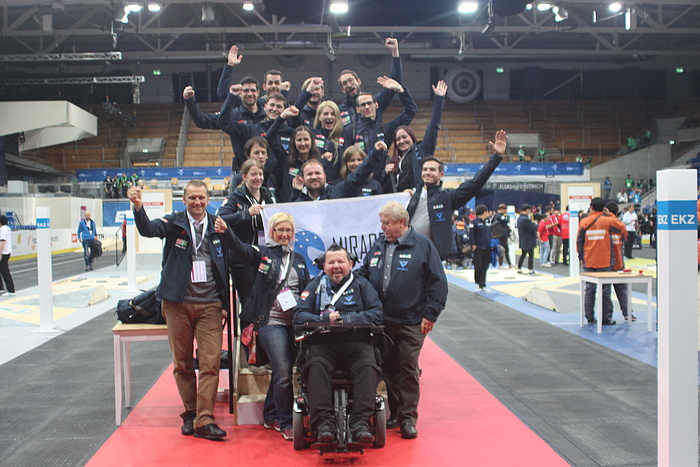 Cybathlon 2016
Persons with physical disabilities compete against each other thanks to the latest technological assistive systems in six challenging disciplines. There are race courses for leg prostheses, arm prostheses, robotic exoskeletons and powered wheelchairs as well as for bicyclists with functional electrical stimulation and thought-controlled virtual races. The courses deliberately focus on real-life problem areas. Just like the Olympics and Para-Olympics, it is intended that the Cybathlon takes place every four years. For more information, see www.http://www.cybathlon.ethz.ch/
David STEYRL
Team Leader Mirage 91
Institute of Neurotechnology
Stremayrgasse 16, 8010 Graz
Phone: +43 316 873 30709
Email: david.steyrl@tugraz.at
www.bciracing.tugraz.at