Hydrogen: “We have to act on this today!”

Christoph Hochenauer conducts research on high-temperature fuel and electrolysis cells. He sees the changeover to a sustainable energy system as “absolutely feasible” and pleads for action now. 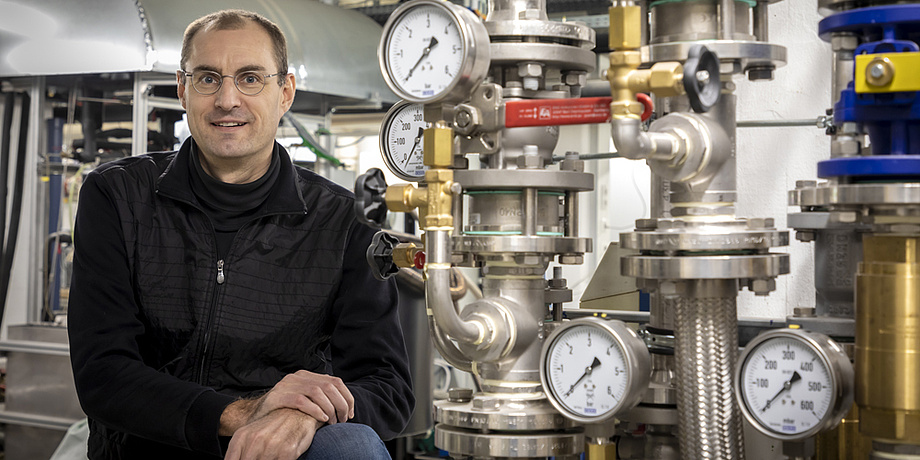 News+Stories: The dominant issue at the moment is energy scarcity. If I now ask you whether we can already run our cars or heating systems on hydrogen, what would you say?

Christoph Hochenauer: Of course we can already run our heating systems and drive a car on hydrogen. At present, there are only very small series and prototypes of hydrogen cars. At TU Graz, we have had two hydrogen cars for several years in the HyCentA competence centre which are approved for road use.

This interview is part of the dossier "Green Hydrogen - hype or hope?", in which experts from hydrogen and energy industry research at TU Graz will answer the big, burning questions about the future of (green) hydrogen in the course of October 2022.

So what’s preventing their widespread use?

Hochenauer: The question is not whether we can drive or heat with hydrogen. The question is whether hydrogen is available. And it is – but only in very small quantities at the moment. It is sufficient for current consumption. But it is not available on a large scale. And it is currently not economically viable to use it because it is still far too expensive.

But couldn’t hydrogen offer us solutions in the current crisis?

Hochenauer: The way we are currently positioned, no. Hydrogen in Austria is mainly produced from natural gas. And if there is no natural gas, then we have no hydrogen. Hydrogen is, after all, a storage medium for surplus energy. In Austria, we currently do not have a surplus of sustainably produced electricity, but still have many fossil energy carriers we need to produce electrical energy. So the electricity is not even available to produce hydrogen by electrolysis. Especially not when we are in the middle of an energy crisis. So at the moment we don’t even need to think about large-scale electrolysis capacities in Austria.

Hydrogen in Austria is mainly produced from natural gas. And if there is no natural gas, then we have no hydrogen.

What would have to happen for that to change?

Hochenauer: We need to put up a lot of wind turbines, build some pumped-storage power plants and roll out photovoltaics on a large scale.

What exactly do “a lot of” and “large-scale” mean in this context?

Hochenauer: It would be absolutely sufficient if everyone equipped the suitable areas of their house roofs with photovoltaic elements. For wind turbines, we are talking about an additional 150 to 200. We easily have the space in Austria.

Of course the changeover is feasible.

That actually sounds quite feasible.

Hochenauer: Of course the changeover is feasible. We could be much further ahead if we would just actually do it, if the funds were also made available in research and development and if we would all pull together. We already know what we have to do.

Are you yourself convinced of hydrogen as a storage medium?

Hochenauer: It depends very much on its deployment and usage. If there is a surplus of electricity from renewable sources, then the use of hydrogon from electrolysis plants makes sense everywhere. This surplus is mainly generated by photovoltaics in summer and by wind turbines during strong winds in spring and autumn. With hydrogen, we can transfer this surplus into the winter and then make it usable. At present, however, hydrogen is primarily produced from natural gas. It makes more sense to burn natural gas directly and save the conversion losses.

Otherwise, hydrogen will be used for special applications, for refineries and high-temperature applications. My gut feeling is that it will remain too expensive for anything else in the medium term at least.

What are the current misconceptions about hydrogen?

Hochenauer: Precisely that hydrogen can help us in an energy crisis. This will not work if there is already too little energy.

You have to remember that energy can always only be converted from one form to another. And with each conversion step, losses occur, some of them considerable. Electrolysis is currently 50 to 60 per cent efficient. So from 100 per cent electricity, I have 60 per cent energy in the form of hydrogen after electrolysis. If I then convert hydrogen into electricity with a fuel cell and again 50 per cent loss, then in the end I have just 30 per cent of the original energy. The rest of 70% are conversion losses, which are usually heat losses that cannot be used.

Are these also the big topics of research?

Hochenauer. Yes. Electrolysis efficiencies must increase massively. With high-temperature electrolysis, on which we are conducting research at the Institute of Thermal Engineering since many years, we are already at 80 per cent. And there is still a lot to be done in terms of storage and the distribution grid.

I myself am also researching applications in large-scale industry. Much remains to be done in this area as well. Let’s think of the steel industry, for example, which currently mainly uses natural gas. Natural gas burns to CO2 and H2O – i.e. carbon dioxid and water vapour. If we use hydrogen as fuel, then the CO2 is missing from the flue gas – only water vapour is produced. The question is, how does the steel, as well as aluminium, react to a high concentration of water vapour? We know, for example, that water vapour is a very aggressive gas at 1,000 or 1,500 degrees that can greatly accelerate scale formation, for example.

What place can hydrogen take in the energy mix?

Hochenauer: I think it will only be used for niche applications for a while longer. But if we get going in the area of renewable electricity, then in a few years we could be so far along that an energy surplus is generated in spring, summer and autumn. This would then spark the next step to roll out electrolysis to be able to store the surplus in the form of green hydrogen. From today’s perspective, this could be possible in five, six, seven years, if we finally move from talking to doing.