Scientists at TU Graz in cooperation with the University of Surrey were able to observe and document the growth of hexagonal boron nitride for the first time. The material is mainly used in microelectronics and nanotechnology. 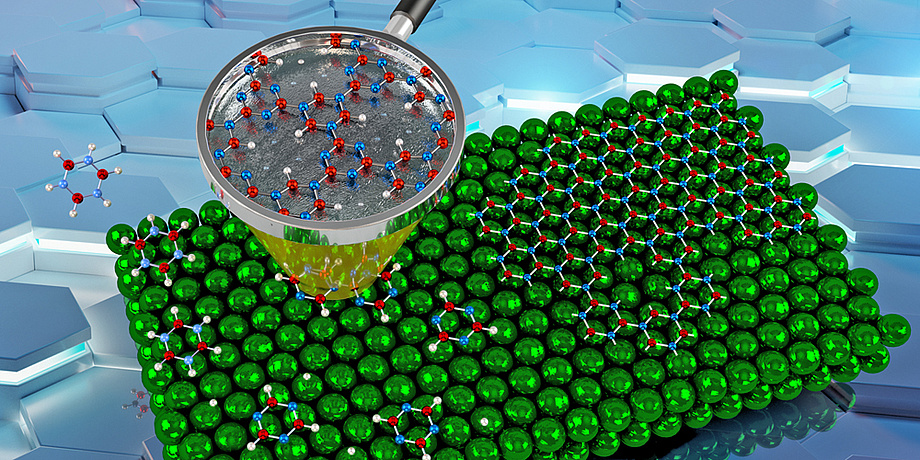 The graphic and paper by Anton Tamtögl and his team even made it onto the cover of Nanoscale Horizons.

Atomically thin 2D materials for applications in microelectronics or nanotechnology are grown by breaking down gas on a hot metal surface. Due to the high temperatures and rapid transformation of the gas, it is extremely difficult to observe this process.
Researchers from TU Graz have now joined forces with colleagues from the University of Surrey to form a successful team combining theory and experiment and were able to observe and document the growth of hexagonal boron nitride for the first time. Hexagonal boron nitride is used primarily in microelectronics and nanotechnology, photonics and power electronics, in fuel cells and as a dielectric for field-effect transistors.

The group led by Anton Tamtögl from the Institute of Experimental Physics at TU Graz observed the growth using helium spectroscopy – a highly sensitive analytical technique for investigating material surfaces and reactions taking place on them with a previously unattainable level of detail and time resolution. Even fast movements of atoms and molecules on crystal surfaces – including quantum movements of protons and ballistic diffusion of molecules – can be studied in this way.

In their experiment with h-BN, they came up with unexpected results: Hexagonal boron nitride has a honeycomb 2D crystal structure that is identical to the structure of graphene. Instead of carbon atoms, however, the hexagon has alternating boron and nitrogen atoms. During the growth process, the scientists saw that the ordered structure of h-BN emerges from regularly arranged holes, so-called nanopores. This is the first time that this open structure has been identified and its role during h-BN growth observed.

Like discovering a completely new species of butterfly in your own backyard.

“We were surprised that instead of the expected diffraction pattern of hexagonal boron nitride, the measurements showed a completely different structure, which we now assign to a novel phase of h-BN,” explains Anton Tamtögl, who led the experiment. “Finding a new phase for such a well-known and technologically important 2D material is like discovering a completely new species of butterfly in your own backyard,” adds Adrian Ruckhofer, who is conducting the experiments as part of his doctoral thesis.

Because they were so surprised by their results, the researchers at TU Graz sought the help of theory and wanted to confirm that their observations were even computationally possible. Marco Sacchi of the University of Surrey then performed the quantum chemical calculations using the national ARCHER2 supercomputer and confirmed that the observed structure is also the unambiguously preferred one mathematically. “We have proven that the combination of experiments and quantum chemical calculations can provide new and important insights into the growth of 2D materials,” says Marco Sacchi: “And we are already planning to use our method to study the growth of other 2D materials.”

To the original publication: