Funded by Qualcomm Technologies, Inc. and the Ministry of Science, Research and Economy, the team wants to enable computers to orientate themselves in a non-standard environment. 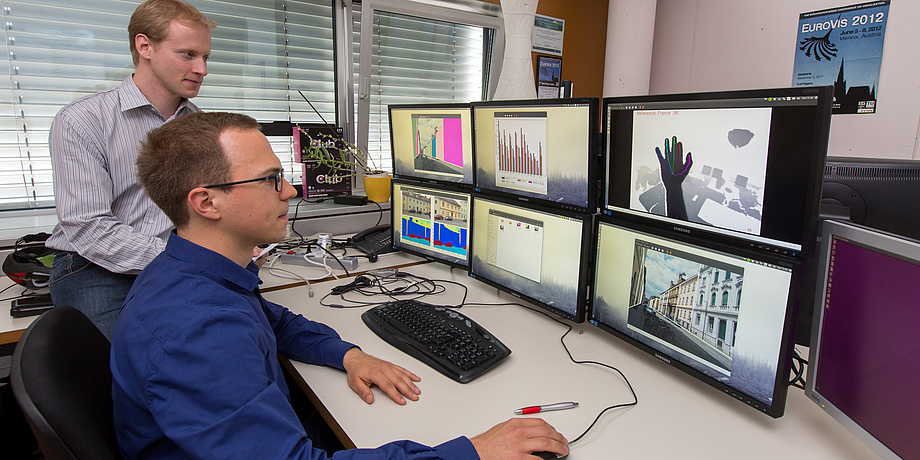 Along with corporate -supporter Qualcomm Technologies, Inc., the team at TU Graz will be working on a description of images in 3D. © Lunghammer - TU Graz

If you want to orientate yourself spatially, you have to perceive your environment and interpret what you perceive. This applies equally to robots as well as all other animate beings. Machines can see thanks to the latest camera technology and computer-controlled image-recognition methods which describe the environment in a standardised way by means of two-dimensional images. The right interpretation of what is seen on a two-dimensional level, however, leaves a lot to be desired, as Vincent Lepetit of TU Graz’s Institute of Computer Graphics and Vision explains: “2D images only give rough information about where an object actually is. It is flat information without details about the depth of objects or their relation to other objects. A robot, for example, doesn’t know exactly where he should grasp.”

On top of this, images can be subject to many aberrations. Distortions, blurring, unplanned movements or similarity to other objects makes it difficult for the machine to see and interpret properly. For a description of the environment in 3D, the available computing capacity is insufficient. “Luckily processing power has grown rapidly in the last few years, and this opens up new possibilities in computer vision,” according to Lepetit. Vincent Lepetit, French by birth, is the head of the new Christian Doppler (CD) Laboratory for Semantic 3D Computer Vision, which was opened at TU Graz on Tuesday, 26 April 2016. In the coming seven years, he and his team at TU Graz along with corporate -supporter Qualcomm Technologies, Inc. will be working on a description of images in 3D. The goal is for robots to find their way independently in a real, uncontrolled environment.

The Federal Ministry of Science, Research and Economy sponsors innovation

“Using robots is becoming increasingly important in daily life as well as in industrial production,” says Vice-Chancellor Reinhold Mitterlehner, Minister of Science, Research and Economy.  “Research in this CD lab will contribute to helping robots better visually perceive their surroundings and being able to react to objects. The solutions worked out here are one more step towards Industry 4.0 and can be made use of in various ways from self-driving cars to application in factories. All the partners involved will benefit from this research and innovation as will the location Austria in the long-term, which can only remain competitive by keeping its finger on the pulse of the times in production.”

Regardless whether autonomous vehicles or in robot-supported factories: machines learn by repetition. If they are fed with data, they can recognise patterns, memorise them and act accordingly. To put it the other way round: to teach a machine something, it needs known data. Lepetit explains: “Many things work these days because in the preliminary stage a huge amount of data was generated by whose repetition a robot learns. If there isn’t any data, laborious manual programming has to be carried out. This makes applications very susceptible to error and not very flexible.” Statistical methods aren’t enough for three-dimensional computer vision. In the framework of the CD lab, the Graz group want to develop machine learning-based algorithms as fundamental components for applications for 3D computer vision. You don’t have to look far for promising applications for 3D computer vision. Robot-supported maintenance in factories, far more exact position recognition for outside use or further developed interaction possibilities between man and machine are just three examples.

Aim of the CD laboratory

Robots need a data source as diverse as possible in order to pinpoint their positions exactly at high speed. The research work at the CD Laboratory for Semantic 3D Computer Vision relies on various types of camera and sensors for recognition of the environment and situation as well as on movement and acceleration sensors and compasses. “Apart from this we’re looking for ways to carry out automatic positioning on the basis of available image databases, such as Google Street View, and by using two-dimensional sources, such as maps and town plans, says Lepetit. At the end of the seven-year CD lab, robots should be able better to unfold their diverse possibilities also in an uncontrolled environment with unpredictable graphic situations.

"A corporate supporter will accompany the Graz scientists: the research and development company Qualcomm Technologies Inc., a wholly owned subsidiary of San Diego, California based Qualcomm Incorporated.   Qualcomm was a partner of the Christian Doppler Laboratory for Handheld Augmented Reality, which was headed by Dieter Schmalstieg of the Institute of Computer Graphics and Vision of TU Graz from 2008 to 2015. "Qualcomm Technologies is proud to be part of this collaboration effort, our second with the CDL,” said Serafin Diaz, vice president of engineering, Qualcomm Technologies, Inc. "We believe our previous collaboration was quite successful, and we are confident this new Christian Doppler-Lab for Semantic 3D Computer Vision can have a similar outcome, this time conducting state of the art research with application to perception for autonomous driving and navigation for robotic applications.”

This Christian Doppler Laboratory ist attributed to the Field of Expertise "Information, Communication & Computing“, one of TU Graz' five strategic areas of research.

Christian Doppler laboratories engage in application-oriented high-level fundamental research. In this context, distinguished scientists co-operate with innovative enterprises. Christian Doppler Research Association is internationally recognised as a best-practice example for the promotion of this co-operation. Christian Doppler Laboratories are jointly financed by the public sector and the participating private companies. The most important public sponsoring agency is the Federal Ministry of Science, Research and Economy of Austria.

To the website of the Christian Doppler Research Association 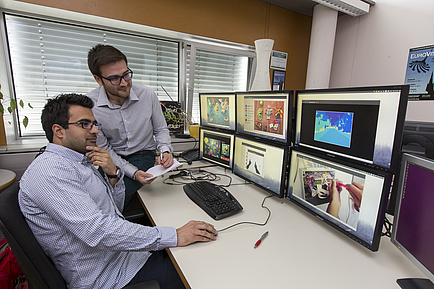 The goal of the CD Laboratory is for robots to find their way independently in a real, uncontrolled environment. . © Lunghammer - TU Graz 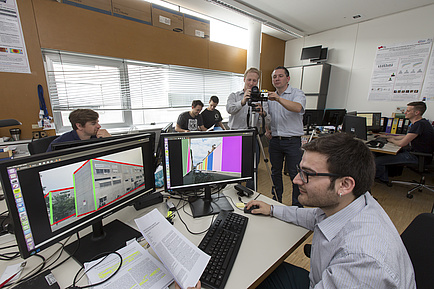 The research work at the CD Laboratory for Semantic 3D Computer Vision relies on various types of camera and sensors for recognition of the environment and situation as well as on movement and acceleration sensors and compasses. © Lunghammer - TU Graz 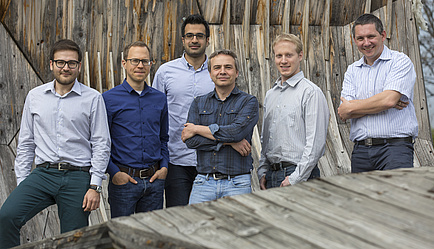 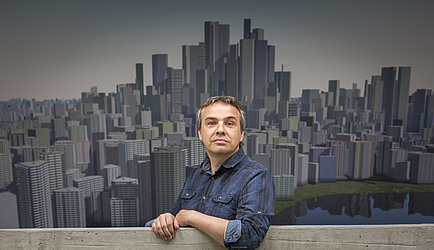 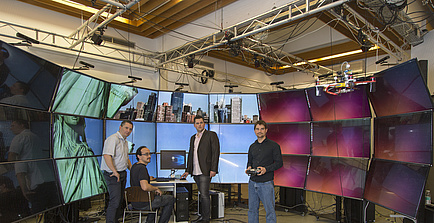 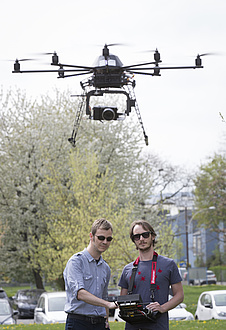