Researchers at TU Graz develop a new charging concept for electric vehicles (EVs). The system allows fast charging to be carried out and also stabilises the electricity grid. 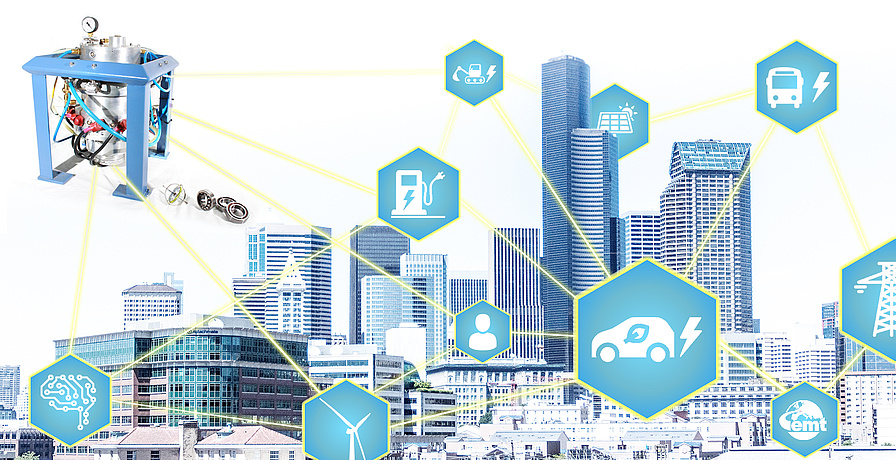 In the last few years, electric mobility has caught up with traditional vehicles powered by combustion engines. However, the electric charging infrastructure, which is not comprehensively available, and the long charging times limit the expansion of this form of mobility. In the FlyGrid research project, together with partners from research and industry, Hannes Wegleiter’s working group Energy Aware Systems at TU Graz’s Institute of Electrical Measurement and Measurement Signal Processing is developing a novel charging system for EVs. FlyGrid technology allows fast charging to be carried out while at the same time reducing the burden on the electricity grid. The key component of FlyGrid is an electro-mechanical flywheel energy storage device which is integrated in a fully automatic charging station fed by photovoltaic power. But that’s not everything by a long chalk.

AirCampus Graz dedicates its latest article to the FlyGrid research project. To be heard on the AirCampus website (German).

The researchers designed a fast charging system that, among other things, consists of a carport roof with integrated photovoltaic panels and an underground flywheel. Electricity is transmitted fully automatically into the car by means of a ‘contact mat’ (using so-called ‘matrix charging’) from the TU Graz spin-off ‘easelink’ along with an extendible connector mounted on the vehicle underbody. The electricity used for this can either be taken from the grid or from the photovoltaic panels of the integrated carport directly without any transmission loss. The loading capacity is increased by means of the photovoltaic electricity obtained from sunlight which has been intermediately stored as rotational energy in the flywheel and can be released at high capacity (100 kW or more) during charging. In this way, charging time is reduced to a few minutes without undue burden being placed on the grid. When electricity is needed or during charging, the electric motor coupled to the rotor is switched to generator operation, thus producing electricity. The flywheel storage unit is characterised in particular by its long service life, and offers much higher cycle stability compared with chemical batteries, simple recycling, and can be produced in Austria without dependence on the Asian market.

‘Due to the denser charging infrastructure and shorter charging times, electric vehicles will become more attractive in future and we will see more of them on the roads. The uncontrolled, simultaneous charging of a large number of electric vehicles, however, results in a very high local power demand, and that would make a very expensive expansion of the grid necessary. Hopefully, FlyGrid will open up a different possibility,’ says project head Armin Buchroithner, looking into his crystal ball. FlyGrid charging stations act as decentralised energy storage units and thus render a cost-intensive expansion of grid infrastructure only necessary in rare cases. To keep the electricity grid stable, FlyGrid flywheel storage units can also feed electricity back into the grid. In principle, the grid cannot carry unlimited electricity, which should be kept at a frequency of 50 Hertz. To achieve this, grid operators would like so-called buffer storage units which feed electricity into the grid or take it out of the grid, depending on need, and store it for later use. The flywheel storage unit integrated in the grid is especially suitable to even out fluctuations in the electricity network because it can supply or store electricity in fractions of a second, thus relieving the grid. It is exactly the rising share of electricity from highly fluctuating renewable energy sources which requires a stronger regulation of the electricity grid. The FlyGrid system could make a crucial contribution to such energy carriers being better integrated into the energy system and grid failures soon becoming a thing of the past.

Armin Buchroithner was awarded this year's TÜV Austria Science Prize for his dissertation on the efficient use of flywheel accumulators in vehicles.

In addition to the high complexity of the whole system, one of the challenges in the project is the high demand on the flywheel material. Due to the enormous centrifugal forces which accrue in the rotor, material stress occurs which demands light and, at the same time, very strong materials. In the longterm, Buchroithner sees great potential in carbon nanotubes, microscopically small tubular structures made of carbon which provide the necessary properties, but which are currently still in the development phase. ‘At the moment, high-strength carbon fibres are the material of choice. When it is possible in the future to make flywheel rotors out of carbon nanotubes, energy densities will become possible which would even exceed fossil fuels!’ says Buchroithner, describing the potential of this new technology.

A pilot plant will be set up on the premises of the cooperation partner Energie Steiermark in Graz’s Neuholdaugasse in the course of the project until 2022. The FlyGrid technology including test operation is being wholly developed and produced in Austria. The system will be deployed on car parks of companies and shopping centres. The technology is very suitable for public transport buses which can only stay for a short while in stopping zones where they can be charged up very fast. The concept is also being planned as a mobile solution, for instance, for electrically driven construction vehicles used on building sites.

This project is anchored in the FoE „Sustainable Systems“ one of TU Graz' five strategic areas of research.
Visit Planet research for more research related news.

Further information about FlyGrid can be found on the project website.