“My work is flying through space”

Did you know that the first Austrian satellite to go into space was built in TU Graz’s labs? TUGSAT-1 has been observing stars for more than six years – and it’s not the only object made in Graz that is hurtling through space. 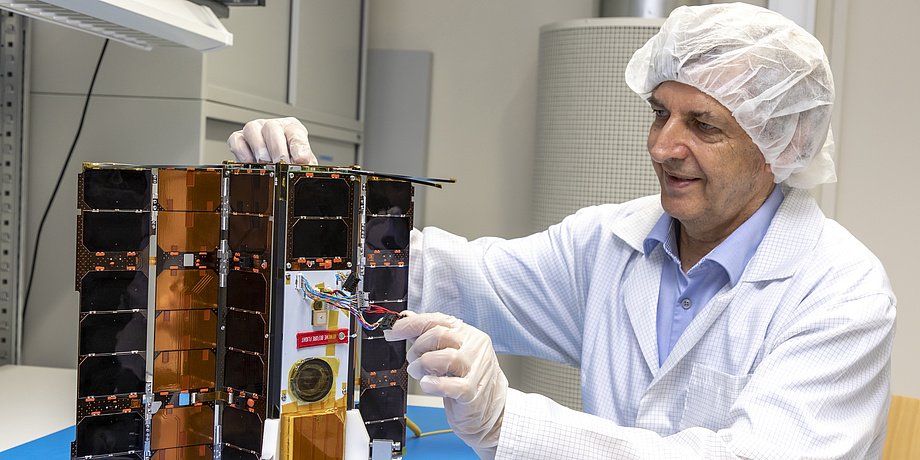 Small, but big enough to be a satellite: OPS-Sat – seen here with Otto Koudelka undergoing final testing in the laboratory in Graz – will begin orbiting the Earth in a few months. © Lunghammer – TU Graz

“The night after the launch I was lying awake in bed and I thought to myself: amazing! This is something that I held in my hands and now it’s flying through space,” recalls Otto Koudelka, sitting at a glass conference table at the Inffeldgasse site in Graz. The star attraction is dangling modestly and inconspicuously in the foyer of the institute. The silver cube, measuring only 20x20x20 centimetres is a precise replica of the first Austrian satellite, the TUGSAT-1 satellite. The nanosatellite was fired into space in 2013 from the Satish Dhawan Space Centre in India as part of the BRITE mission, and is still orbiting the planet. It has already outlived its expected lifespan by four and a half years and is still transmitting reliable data to the ground station in Graz. “Just last year, our joint mission caused a sensation,” Koudelka tells us. “The BRITE satellite constellation was the only satellite mission to record an entire nova.” A nova is a sudden increase in the brightness of a particularly massive star, a process which provides insights into the origins of the universe. 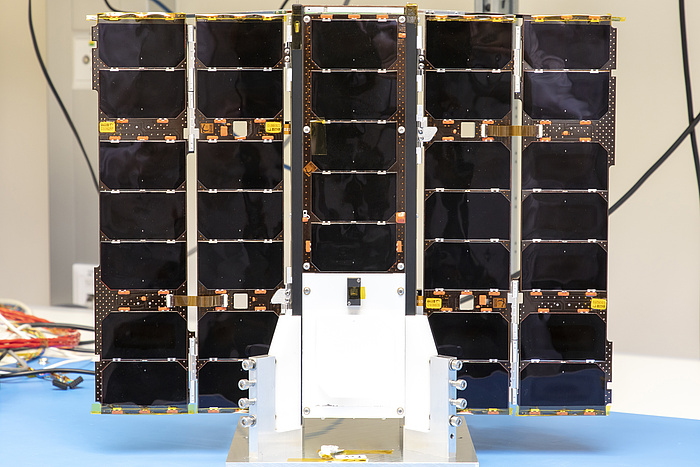 In contrast to its nanosatellite predecessor TUGSAT-1, OPS-Sat is oblong and can open out two wings. Its antennae are rolled up as it heads into orbit, before being fully extended when the satellite arrives in space.

OPS-Sat – the latest satellite to emerge from the labs of the Institute of Communication Networks and Satellite Communications at TU Graz – is due to be launched this winter. In terms of its structure, it is similar to the BRITE mission’s CubeSat, but it is longer and has wings fitted with solar panels to ensure sufficient electricity supply. And this flying software lab will need plenty of power: the satellite contains a powerful processor, as well as a camera used for earth observation, a receiver for optical data transmission and a programmable radio receiver. Numerous software and data transmission (laser and radio) experiments will be carried out, with the aim of making space travel safer and more effective in future. “For instance, we’ll be changing OPS-Sat’s software during the flight,” Koudelka explains. “Normally, that’s far too risky and you don’t touch the code once the satellite has left the Earth.” Research teams from all over the world submitted a total of over 100 experiments to ESA, although there are only plans to perform 15-20 of these in space using OPS-Sat.

While OPS-Sat is being readied for launch and undergoing final testing at the ESA operations centre in Darmstadt, work on the next mission is already under way in Graz. In early 2020, the team will kick off operations for PRETTY, another CubeSat that is intended perform precise altitude measurements (e.g. of glaciers and ocean waves) and investigate the radiation in near-earth space.

However, CubeSats are not TU Graz’s first foray into space. University researchers played a central role in the Austromir mission, which in 1991 saw Franz Viehböck become the first Austrian in space as he made the journey to the now-deorbited MIR space station. “Space professor” Willibald Riedler, a TU Graz researcher, was in charge of the scientific side of the mission. Otto Koudelka was responsible for the video feed between Earth and MIR, and for the live video discussion between Franz Viehböck and then Austrian president. Robert Finsterbusch, also a researcher at the Institute of Communication Networks and Satellite Communications, was the man behind a spaceworthy materials analysis station which remained in operation on the Russian space station for several years.

The history of TU Graz in space.

Lift off! We’re on our way to Jupiter!

No doubt Roland Lammegger of the Institute of Experimental Physics was thinking the same as Otto Koudelka after the launch of his satellite. In collaboration with the Space Research Institute, he builds measuring equipment, data from which can be used to draw conclusions about the presence of liquid water on planets and moons. And this is precisely what one of his devices will be doing from 2022, far away from Earth: collecting data on Jupiter’s icy moons of Europa, Ganymede and Callisto.

Full details of the JUICE mission are available at the mission website.

This machine also looks rather unremarkable: it is only the size of an A3 sheet of paper, but the impressively-titled quantum interference magnetometer uses the quantum interference effect to measure the magnetic fields of celestial bodies. “Atoms are put into a dark state, which means they can no longer absorb laser beams,” Lammegger explains. “This is a resonance phenomenon connected to the energy states of atoms. An external energy field influences the atoms’ energy states and we can measure the effect.” The magnetometer is part of ESA’s JUICE mission, which will see a host of different measuring devices travel into the depths of space on board an Ariane 5 rocket. “Before reaching its destination, the probe will spend eight years criss-crossing our solar system,” says Lammegger with a grin. “The probe needs to pick up momentum for the trip to Jupiter, so first it will fly to the sun, then back to Earth, to Venus, back to Earth again, on to Mars, around the sun one more time and then it will head to Jupiter.” And it will also collect scientific data as it pays a visit to almost all of Earth’s neighbouring planets. “First, we’ll carry out some tests during the long journey, and then collect and evaluate data about the sun, Venus and Mars.” Such an arduous trip to various parts of the solar system is a major challenge for the researchers. The measuring devices have to be able to withstand the searing heat close to the sun, as well as the extreme cold near Jupiter. In addition, the extreme high-energy particle radiation in the Jupiter system means that fibreglass cables would stop functioning in next to no time. “In the course of our tests they quickly turned opaque and stopped working.” But these difficulties have been solved, and the magnetometer is in the final stages of the test phase, where it is being shaken, cooled and irradiated before being mounted on the probe. 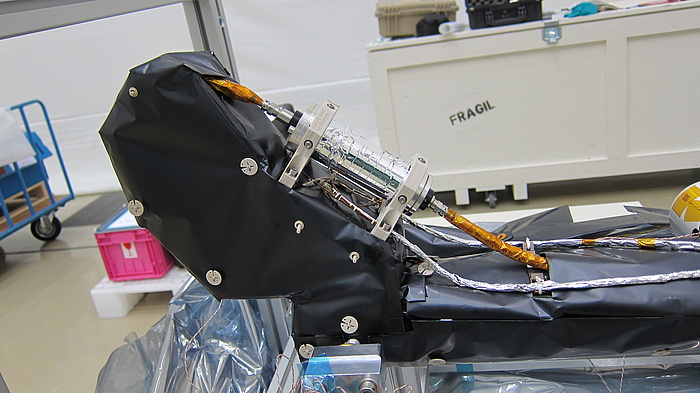 The sensor of the magnetometer at the tip of the ten meter long arm of the probe is being tested in ESA laboratories. The device from the TU Graz laboratory is a world premiere: it is the first of its kind on Earth - and in space.

In parallel, the team is working on the next magnetometer, which will go into orbit as part of China’s CESES II mission. From high above the Earth it will scan the planet’s magnetic field in search of indications of impending earthquakes or volcanic eruptions, which would significantly improve predictions of natural disasters. This mission is the follow-up to CESES I, in which a similar type of magnetometer made in Graz celebrated its world premiere.

Torsten Mayer-Gürr and his team from TU Graz’s Institute of Geodesy do not build their own satellites or measuring devices, but they have a close interest in evaluating data collected by such equipment. They use satellite position data in order to precisely measure the Earth’s surface and map the distribution of mass on the planet we call home. The team’s analysis enables them to predict floods and to show how ice masses in the coldest reaches of the planet are changing. 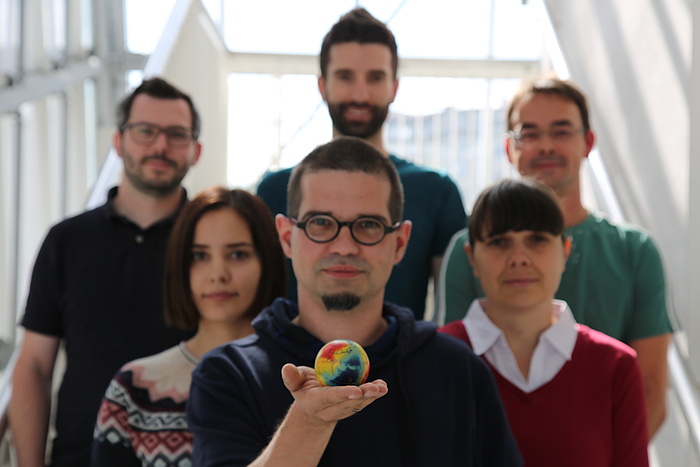 Torsten Mayer-Gürr and his team from the Institute of Geodesy at TU Graz.

Getting in shape for Mars

An alternative way to explore space without relying on measuring equipment or satellites is to fly there yourself. To Mars, for example. Space agencies around the world are busy laying the groundwork for such a mission, but there are still a few questions that need to be answered before they reach their goal. In 2018, the Austrian Space Forum made its contribution to finding a potential solution by conducting the AMADEE-18 Mars simulation. Researchers, including three teams from TU Graz, trialled equipment they had developed, and tested theories in the desert landscape of Oman. A team headed by Gerald Steinbauer of the Institute of Software Technology shipped its autonomous rover Husky to the sultanate. Husky is designed to facilitate the work of astronauts on the Red Planet. During the trials it mapped out the area around the camp that had been set up for the simulation, as well as checking radio coverage and assisting with transportation.

Martin Habmüller and his colleagues from the Institute of Signal Processing and Speech Communication looked at the effects of communication delays – it takes 20 minutes for a message to reach Earth from Mars and another 20 minutes for the answer to be received – and the demanding emotional setting on the crew’s verbal and written communication.

Meanwhile, physics student Michael Müller carried out tests on whether replacement parts can be produced on site using a 3D printer.

A small slice of a huge pie

Speaking to Otto Koudelka in his office in Graz, he does not let on whether he would like to travel into space like his probes. Instead, he is looking forward to OPS-Sat’s launch and carrying out preparations for PRETTY. “It’s a really exciting time,” he admits.

At first glance, TU Graz does not appear to be a top research facility when it comes to space-related topics. But nevertheless, its wide-ranging scientific work is playing a significant part in helping us to better understand our home planet and our interstellar neighbours.