Torsten Mayer-Gürr surveys the Earth. He may work in an office in Steyrergasse in Graz, but his measuring device flies more than 400 kilometres overhead. 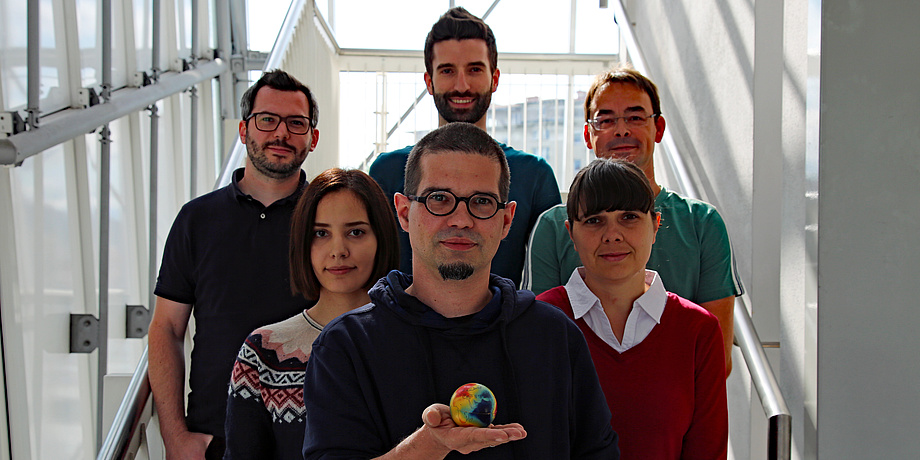 Over 400 kilometres above us in the heavens, Tom and Jerry chased each other for years. One of them always out in front, the other in hot pursuit at a varying distance. “We named the two satellites after the cartoon characters, who are always chasing but never catch each other,” says Torsten Mayer-Gürr with a grin. He is sitting in his tidy office in Steyrergasse – on the cabinet behind him is a poster of two fridge-shaped satellites with the caption ‘Tom and Jerry’, which is waiting to be hung on the wall. The robust-looking flying objects on the poster are the scientist’s measuring devices. Or rather, they were for 15 years until they burned up on re-entry into the Earth’s atmosphere a couple of years ago after their mission had been completed. While in operation, the twin satellites collected valuable data, which provided important information for scientists working on topics such as climate change. 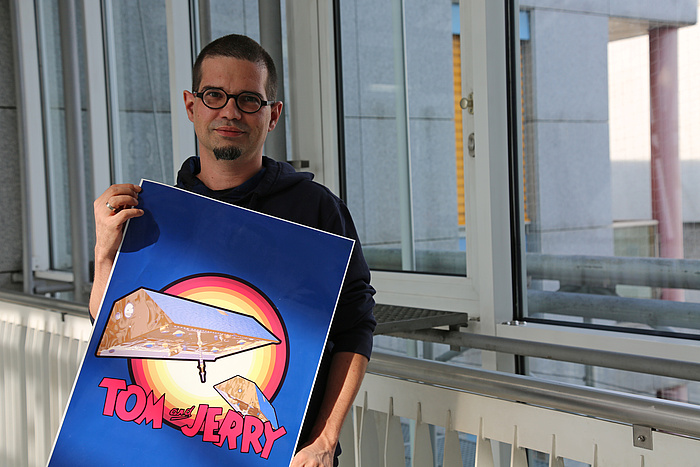 Tom and Jerry chased each other for 15 years.

“Our analyses make it possible for people to gain better insights into the dynamic Earth system,” explains Mayer-Gürr. He is a reasearcher at TU Graz´s Institute of Geodesy and head of the working group Theoretical Geodesy and Satelite Geodesy. His specialist field is satellite geodesy – he and his team take measurements of the Earth from space, which enables them to precisely map the amount of mass there is at different locations on the globe. “This is how we are able to chart the changes in the ice masses in Greenland, or depict the wet seasons in the Amazon, for instance.” They can also calculate the probability of flooding in specific regions.

In theory, satellites revolving around the Earth should follow an elliptical orbit: if the Earth were smooth like a bowling ball, then satellites would also trace a smooth orbit. But the Earth’s surface is not like that. There are mountains, seas and continents – some areas have more mass than others. The force of gravity is determined by mass, so the gravitational pull on satellites is greater over areas with more mass: when a satellite is passing over a mountain, the pull is stronger than when it is passing over an ocean trench. “These are minimal differences,” says Mayer-Gürr. “But we are able to measure them to build up a very accurate picture of our planet. We can use any satellite in low Earth orbit carrying a GPS receiver for our calculations.”

The international GRACE (Gravity Recovery and Climate Experiment) mission launched two satellites, nicknamed Tom and Jerry, into low Earth orbits at an altitude of about 400 kilometres. For 15 years they provided the Graz researchers with accurate data on the characteristics of the planet below. Each month they produced a precise, up-to-date image of the masses on the surface of the Earth. “If you look at these images side by side, you get a very clear picture of the changes which are taking place on our planet,” Mayer-Gürr explains. For example, in Greenland alone around 250 gigatonnes of ice are disappearing every year – equivalent to 250 one-kilometre-high ice cubes.

The researchers show the water saturation in different reagions.

The researchers also use the data to monitor annual weather patterns, analysing the wet and dry seasons in the Amazon, for example. Predicting flood risks is another aspect of their work: “We also measure the amount of water absorbed by the ground after it rains. When the ground is already saturated, there is a very high risk of flooding if more rain comes.” They are unable to make these predictions at the moment because the GRACE mission has ended. However, work has been underway on its follow-up mission for two years, and new satellites will start beaming data back to Earth again in early 2020. “If we received data today, for instance, we’d be able to issue flood predictions by tomorrow evening.”

In spring, the working group caused a sensation with the most accurate gravity field measurement on earth. Read the TU Graz news under "Determening the Earth´s gravity field more accurately than ever before".

All the institute’s work starts with “mountains of numbers” – millions of pieces of position data from the satellites. The GRACE mission satellites measured their position and distance in relation to each other every ten seconds, for example. This resulted in a 250-terabyte system of equations which was solved by a dedicated computer with around 200 processor cores and “a whole lot of RAM”. The institute depends on the quality of its data.

Its researchers often have to go back over their data analyses with a fine-toothed comb to confirm the data quality. “The GRACE data produced unusual outliers which we were unable to explain,” recounts Mayer-Gürr. “After a while we worked out that when the sun was at a specific angle, it was interfering so much with the satellite’s on-board star observation camera that the processor was being overloaded and the measurements went haywire. When the position of the sun changed, the data returned to normal.” The rapid transition from sunlight to shade also upset the sensors: “The temperatures that the satellites were exposed to increased or decreased extremely quickly by about 100° Celsius, and also produced anomalies.” Identifying problems like these takes a lot of creativity and a wide range of visual presentation options. “By visualising the data in the right ways, you’re able to see patterns and pinpoint where the problem lies.”

At the Institute of Geodesy, the data processed by the researchers is freely available for the use of scientists working in other disciplines: glaciologists studying ice masses, oceanographers monitoring see levels, hydrologists who are responsible for issuing flood warnings, and geologists researching rock-mass movements.

But since he is already working with satellites, isn’t Mayer-Gürr tempted to turn his attention to space? “We’ve actually already measured the gravity field of the Moon – just because we could,” he smiles. “But I’ve always found the Earth much more interesting.”

This research area is anchored in the Field of Expertise “Sustainable Systems”, one of five strategic foci of TU Graz.
Subsrice to TU Graz research monthly for more research related news.