People with locked-in syndrome (LIS) are enormously restricted in their communication. Implantable brain-computer interfaces that decode speech in real time from brain signals should help free users from isolation. 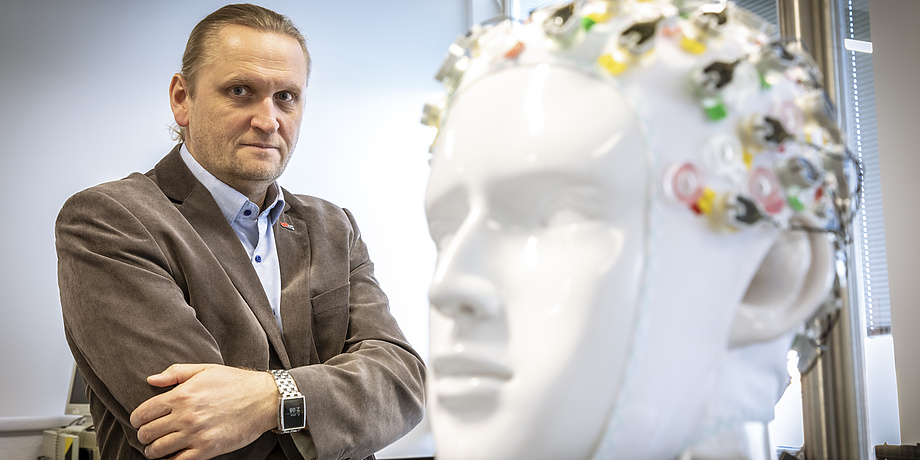 Gernot Müller-Putz from the Institute of Neurotechnology at TU Graz is part of an EU project to develop a brain-computer interface that can decode language in real time from brain signals. He is still looking for interested young researchers to join the project team.

People with degenerative diseases of muscle-controlling nerves such as ALS (amyotrophic lateral sclerosis) are at risk of losing complete muscle control. This leads to locked-in syndrome (LIS), where the affected person is completely paralysed and can no longer communicate despite still being fully aware – a frightening and extremely challenging situation for the affected person, their family and also the nursing staff.

A European research consortium led by the Dutch University Medical Center UMC Utrecht and with participation of TU Graz has now been selected for funding by  EU grant of almost 6 million euros from the European Innovation Council (Pathfinder Programme). The project aims to develop and test a fully implantable brain-computer interface (BCI) technology specifically for people with locked-in syndrome.

The Intracranial Neuro Telemetry to REstore COMmunication (INTRECOM) research project aims to bring LIS patients out of isolation. A new, fully implantable BCI technology is designed to decode speech in real time from brain signals. For the first time, patients will have a complete and easy-to-use communication system through which they can speak and control a computer cursor.

"In order for those affected to be able to interact with the system at all, we will set up the decoding of mouse clicks and the control of the cursor from the intended movements as a first step. We have already proven this to be feasible in previous studies," explains Gernot Müller-Putz from TU Graz' Institute of Neural Engineering. Nick Ramsey's group (UMC Utrecht) is developing a way to decode language from brain signals: "We evaluate the person's attempt to produce sounds that make up a spoken word. In this way, we can read what the person wants to say from the brain signals in real time. We have to record very fine-grained brain signals for this, which is only possible with very miniaturized and spatially high-resolution ECoG electrodes."

CorTec will develop parts of the implantable electronics that record brain signals: these are customized high-resolution ECoG electrodes with high-channel wiring and novel implantable connectors. The Swiss Wyss Center for Bio and Neuroengineering is contributing a powerful implantable biosignal amplifier that processes the data and transmits it wirelessly to external computers for analysis and decoding. Tracy Laabs, Chief Development Officer at the Wyss Center, is excited: “After several years of prototype developments, this project will allow us to make the crucial final steps that will bring our system to the patient”.

Test persons in Utrecht and Graz

It is important for the researchers to find a solution that works not only in artificial laboratory environments, but also at home and without the support of technical experts. The new system must therefore be easy to use and robust, while at the same time utilizing the latest AI-based and self-learning technologies. The BCI will be tested on two people with ALS in Utrecht and in Graz. BCI expert Gernot Müller-Putz and his team from the TU Graz Institute of Neural Engineering are leading the main part of the project on "Brain signal decoding". The work package includes, on the one hand, the development of the BCI software and algorithms for simple mouse clicks up to continuous cursor control and, on the other hand, the research and development of BCI software for speech decoding.

Gernot Müller-Putz is currently working on putting together the research team in Graz and is looking for interested doctoral and post-doctoral students. The institute's websites provides further information on current open positions for the INTRECOM project at TU Graz.

The INTRECOM project will run from autumn 2022 until autumn 2026. Further partners apart from UMC Utrecht (Netherlands) and TU Graz are the Wyss Center für Bio- and Neuroengineering (Switzerland) and the medical technology manufacturer CorTec (Germany).