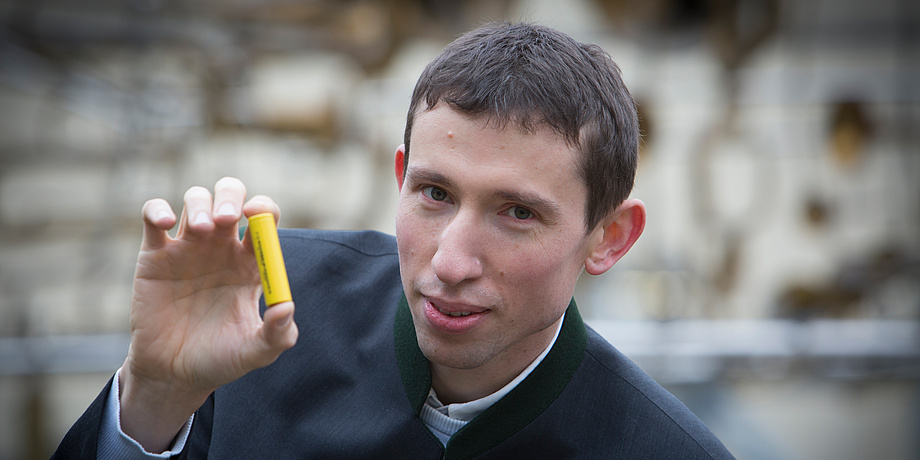 After stations in Zurich, Kanada and Scotland ERC Starting Grant awardee Stefan Freunberger researches on new energy storage systems at TU Graz. © Lunghammer - TU Graz
Batteries and super capacitors are electrochemical energy storage media, but they are as different as night and day. Both are capable of energy storage and targeted energy release – and yet there are major differences between the two. Batteries store very large amounts of energy that is released slowly but constantly. By contrast, super capacitors can only store small amounts of energy, but they release this energy much faster and more powerfully with large short-term peak currents.

“Batteries release energy so slowly and take so long to charge because their energy storage materials are solid. This make it difficult for the ions to move.  But as the ions in a super capacitor move in a liquid, they are much more mobile than in a solid material,” explains Stefan Freunberger from the Institute of Chemistry and Technology of Materials at TU Graz. The novel redox active ionic liquid developed by the group consists of an organic salt that is liquid at a temperature of just below 30 °C – only slightly above room temperature. Similar to a solid storage medium this liquid can store many ions, but allows them to be much more mobile. The sudden flash of insight of the scientists culminated in a first approach to create an integrated energy supply system that offers a constant energy supply with high-power output. In some cases we are still faced with an either/or decision. Automatic doors, for example in trams or trains, are typical candidates for super capacitors. Energy is only needed for a very short time but when it is, a high-power output is of the essence. In other cases batteries are clearly the first choice. “But the principle of an energy hybrid can offer enormous advantages, for example when applied in electric vehicles. So far, electric vehicles often carry a combination of different battery types or battery systems together with super capacitors. If we had a single system that combines the benefits of both energy storage types, we could save considerable space and resources,” remarks Freunberger.
This research area is attributed to the Field of Expertise "Advanced Materials Science“, one of TU Graz' five strategic areas of research.

Nature Materials | doi:10.1038/nmat4808
„Biredox ionic liquids with solid-like redox density in the liquid state for high-energy supercapacitors”
to the original paper on nature.com Stefan Freunberger was awarded an ERC Starting Grant in 2014, as documented in the TU Graz press release (available only in german)
Stefan FREUNBERGER
Dipl.-Ing. Dr.sc.ETH
Institute for Chemistry and Technology of Materials
Stremayrgasse 9, 8010 Graz
Phone: +43 316 873 32284
Email: freunberger@tugraz.at