Solar storms as danger for the power grid

Power cuts have a wide variety of causes. Mostly we think of damaged power lines due to wind and weather or unplanned power surges that overload the grid. But solar storms can also lead to them. 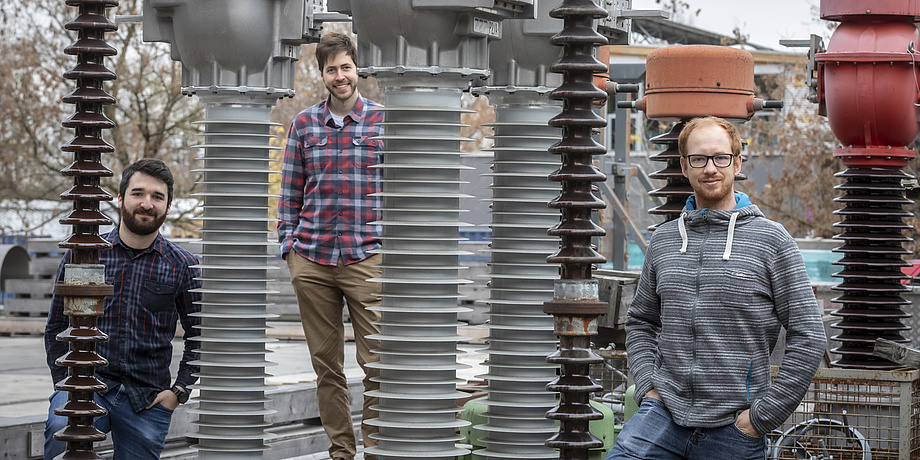 At the Institute of Electrical Power Systems, Philipp Schachinger, Dennis Albert and Stefan Polster are conducting research on the effects of solar storms and grid reconstruction after a blackout. © Lunghammer – TU Graz

Electricity is omnipresent in our lives. So omnipresent that we no longer even consciously perceive it. Except when it's suddenly gone and we're aimlessly searching for a torch. Power cuts have a variety of causes - solar storms could be one.

Solar storms are charged plasma waves emitted by the Sun during periods of high activity that can be Earth-directed. These plasma waves hit the Earth's magnetic field and compress it, like a balloon that you squeeze with your hands. These magnetic field changes lead to the induction of an electric field in the ground. "This electric field causes currents in our high-voltage lines. These unwanted currents have a negative impact on our energy supply," Dennis Albert and Philipp Schachinger tell us. As university project assistants at the Institute of Electrical Power Systems at Graz University of Technology, they worked on the effects of solar storms on electrical networks. "Transformers in particular are adversely affected by low-frequency currents generated by changes in the Earth's magnetic field. That can lead to big problems." The electric field can be calculated using the Austrian power grid data and the measured geomagnetic field. This allows them to calculate the currents acting on the individual transformers and make deductions about what influence they have. "We are constantly measuring the induced currents at six transformers in the Austrian transmission grid to verify our calculations," Albert explains. "In addition, in the lab we have two converted power transformers on which we are conducting experiments." This allows the team to match computer models and calculations with actual measured data.

By the way, every eleven years solar storms are particularly intense. The Sun goes through a regular cycle, during which the poles change from north to south. Currently, we are at the beginning of cycle 26. At the beginning of a new cycle, geomagnetic activity is usually low." At the moment, we can mainly measure what other influences there are on the power grid that are not generated by the Sun," explains Herwig Renner, professor at the Institute of Electrical Power Systems. "Among other things, we're looking for weekly rhythms that don't exist in nature, und so must have been made by humans." For example, undergrounds affect the power grid and the disturbances in the data correlate with their schedule. "We are working intensively with Wiener Linien (the underground/ subway operator in Vienna) in this area and can generate valuable data," Renner said. 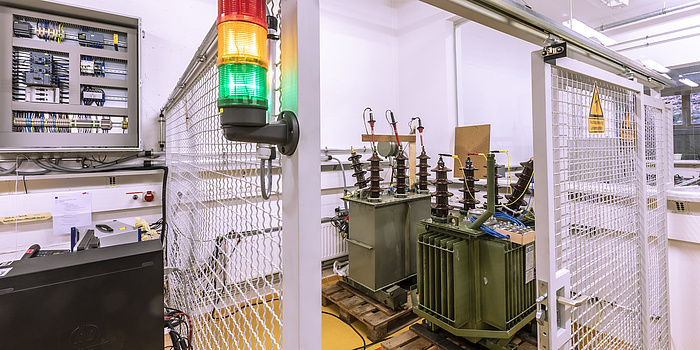 The Institute's laboratory is equipped with an experimental transformer. © Lunghammer – TU Graz

When the power is off...

At the Institute of Electrical Power Systems, researchers are also dedicated to the topic of blackouts or power outages in general – regardless of what triggers them. "We start at the point where the power supply has collapsed over a large area and investigate how it can be rebuilt step by step," explains Stefan Polster. His area of expertise is blackouts and how to fix them. "Of course, there are different kinds of necessary repairs to the grid depending on whether the outage was triggered by a damaging event – such as widespread wind damage as a result of a storm – or by overloaded lines. But this has no bearing on the reconstruction concepts – they take place in the same way."

Network operators have strategies for how they proceed in the event of an outage in order to restore supply as quickly and safely as possible. The working group at the Institute advises power plant and grid operators on this, provides support in advance with theoretical simulations and is on site for real tests. Like in the spring, for example, when an entire power plant was taken off grid. "The timing for such a large test obviously has to be meticulously planned so that supplies can still be maintained." By the way, the test worked wonderfully – the concept works.

The first step is to narrow down the scope of the power cut – does the outage affect the entire European grid, just one country, or is it more localized? Next, an "island" is set up – i.e. individual machines are started up and a limited network segment is slowly connected together. If everything runs stably, additional loads are gradually added and a small, locally functioning network is built up. This continues until the power grid is fully rebuilt.

All research areas of the Institute of Electrical Power Systems can be found online on the Institute's website.

Climate change as a threat to the power grid

Major power outages happen all the time. In Malmö, for example, in 2003, where solar storms caused a large-scale outage. Or a few years ago, when the line to Italy suddenly went off grid because of too high loads. And according to Herwig Renner climate change also seems to be making its contribution to the danger: "We are noticing that there are more and more extreme weather events, which of course lead to a higher risk for the power supply. But we're also noticing that awareness is increasing and there are better and better countermeasures." If everything goes according to plan, then the most important infrastructure should be restored within a day after a power outage – the overall supply within a week. "However, it is not very likely that there will be a truly extensive power outage," says Stefan Polster, trying to allay fears of a blackout. “But realistically speaking, it is possible."