The Craziest Ideas Are the Best Ones

Sergio Amancio is a materials scientist. Despite spending less and less time in the lab, he remains a passionate inventor. 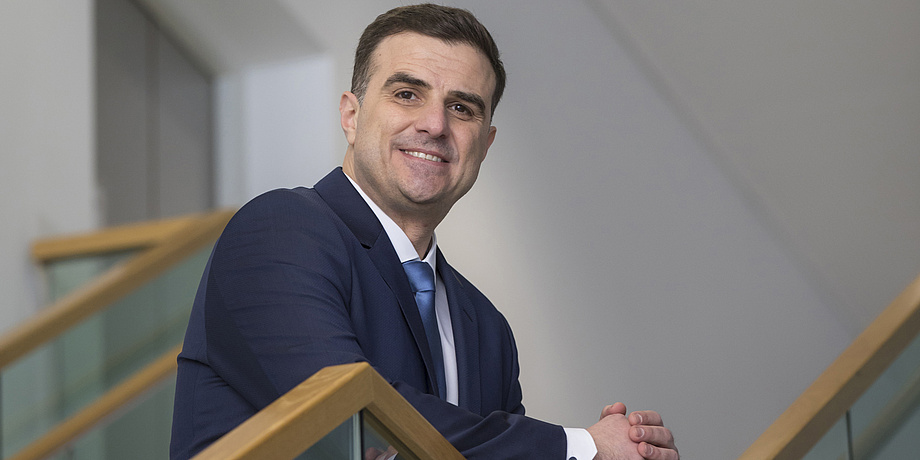 Sergio Amancio things of himself as a passionate inventor. © Lunghammer - TU Graz

This article has just been published in our research magazine TU Graz research. You can read or download the latest issue directly as an e-paper. The magazine is published twice a year - you can subscribe to it digitally or as a print version at www.tugraz.at/go/research-journal

“I took the least crazy idea and ran with it,” says Sergio Amancio with a big smile, reflecting on how he obtained his first patent. The avid inventor now has 21 patents to his name, and more are expected to follow at TU Graz.

Even as a young student, he knew that the path he wanted to tread was the one leading to a professorship. “I knew back then that I needed to have something special on my CV to improve my prospects,” he explains. That “something special” was to be a period of study abroad. “Germany was never the plan. And all I knew about Austria was that it had beautiful scenery,” recalls Amancio, who is from Brazil. It’s a good thing that the researcher loves hiking and thinks that the traditional wine taverns in Austria are “a great concept”, because fate and a professor at his university in Brazil decided to send him not to the UK for a six-month master’s placement, but first to Geesthach near Hamburg in Germany and then to Styria in 2018.

“Six months became 18 years,” Amancio recounts, looking back on his career. “After finishing my master’s I had the opportunity to do my doctorate in Germany.” Having been awarded a grant by the Brazilian government, he was about to start work on the first material samples when the industrial company he was cooperating with made a U-turn. Suddenly the young researcher found himself with promising funding prospects, but without a research topic and an empty lab. “Around that time my supervisor told me about an aircraft manufacturer’s idea for producing lightweight parts out of titanium and carbon fibre reinforced polymer, or CFRP. Totally impossible, I thought. Due to the vastly different melting temperatures, the plastic has already burned well before the metal is just starting to warm up.” A few all-nighters later, Amancio had hit upon his new topic: he opted for his “least crazy idea” and went on to develop friction riveting – a riveting technique for creating joints between metal rivets and plastic by heating rivets by means of friction and pressure to cause plastic deformation. Amancio’s efforts led to a doctorate, as well as the first of his 21 patents. For his dissertation he received his first scientific award from the NORDMETALL Verband der Metall- und Elektroindustrie in Germany. In the course of his career, he received other awards, such as the Georg Sachs Prize from the Association of Foundations for Metals and the Association of the Austrian Non-ferrous Metal Industry.

Amancio joined TU Graz in 2018 to take up his BMVIT Endowed Professorship for Aviation. The materials scientist is tasked with stimulating advances in lightweight design and strong macrocomposites made of metal and fibre-reinforced plastics, primarily for aviation industry applications. “Our materials can also be adapted for the automobile industry and for aerospace applications,” says Amancio, before outlining the ultimate goal of his work: “We want to enable the production of lighter parts which will reduce fuel consumption and extend maintenance intervals.”

All about begin involved

Amancio is rarely in the laboratory nowadays: “I do a lot of teaching and as a professor and the deputy head of the institute I have administrative duties to fulfil,” says the researcher, who also represents TU Graz on BMVIT’s aviation strategy advisory committee.

He is keen not to lose touch with new developments in materials research, however, and also wants to provide his students with maximum support: “Whenever I can, I sit down with my PhD students at our big conference table to hear about their progress and the problems they’re tackling. We identify solutions and sketch out new ideas on the big whiteboard in the meeting room,” he explains. “Especially during the first two years, when junior researchers are learning how research works, I think it’s important to be on hand. This helps to motivate these young people and in turn develops their ability to work independently,” says Amancio.

This research area is anchored in the Field of Expertise “Advanced Materials Science”, one of five strategic foci of TU Graz.
You can find more research news on Planet research. You can receive monthly updates from the world of science at Graz University of Technology via the research newsletter TU Graz research monthly.