Many things today can be produced simply, fast and cheaply using a 3D printer: jewelry, small components and even prototypes. Printing complete houses is still a long way off. For the moment, at least. 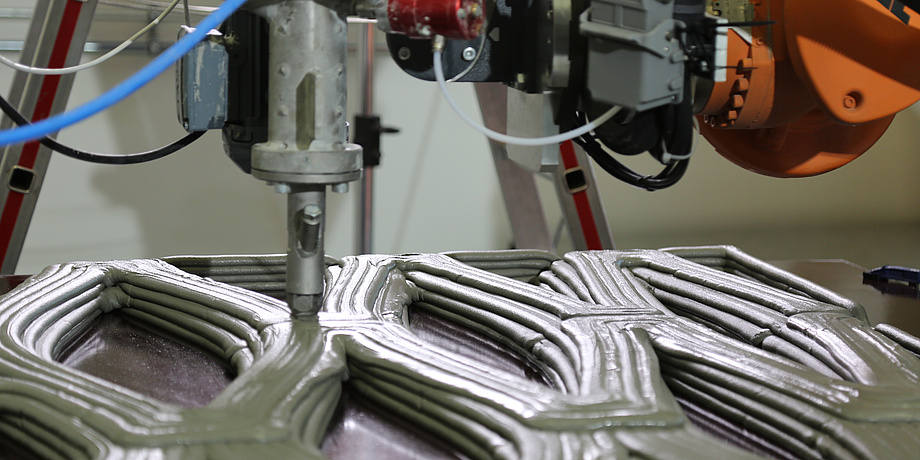 The first layers of concrete for the prototypes are successfully printed. © Baustädter – TU Graz

But work is being done at TU Graz on additive manufacturing of concrete parts using printing robots.

“Everything began with a curious student,” recounts Andreas Trummer from the Institute of Structural Design at TU Graz. “One of our students had heard about 3D concrete printing and wanted to explore this in depth in his master’s thesis. Jürgen Holl – at the time doing his master’s in architecture – used the Institute’s ABB robot lab to develop a prototype of a conveyor and 3D printing plant. He spent hours and days researching the mysteries of concrete printing. And then the Institute asked itself an even bigger question: how can this completely new technology be used in the building industry?

“In some areas the building industry has hardly changed over the last few decades,” explains Stefan Peters, head of the Institute of Structural Design. “The procedures by which buildings are made today hardly differ from those I got to know as a young person in my holiday jobs on building sites. The COEBRO project (Additive Fabrication of CONCRETE ELEMENTS BY ROBOTS) was launched in 2015 out of the desire to create something new in the field. It is funded and supported by the Austrian Research Promotion Agency (FFG) and partners from science and business through the Bridge programme.

The aim of the Bridge funding network is to carry out practical basic research and open up new research fields together with institutions and companies from industry and science.

Stefan Peters and Andreas Trummer head the COEBRO project together with Bernhard Freytag from the Laboratory for Structural Engineering and Viet Tue Nguyen from the Institute of Structural Concrete. “What drives us, on the one hand, is a conviction that a leap in technology in the construction industry is possible,” explains Stefan Peters. “On the other hand, we think that this technology can be used to build more efficiently and in a more resourcesaving way.”

Robert Schmid, Georg Hansemann and Dominik Schraml are involved in planning, organisation, robot control and general management of the labo¬ratory at TU Graz. Eva Pirker, Joshua Tapley and Christoph Holzinger are responsible for engineering. Valentino Sliskovic is responsible for the laboratory and for carrying out experiments, and Huy Hoang Kim is responsible for the field of concrete technology.

The COEBRO project specialises in the production of prefabricated concrete parts. The currently most widespread manufacturing process is casting technology. In this technology, formwork or shuttering is built and adapted and is filled in with liquid concrete, which solidifies in the desired shape. Building parts prefabricated in this way, although extremely robust, are not always made efficiently. This system is only economical when the concrete parts are made in the same formwork, whether it is necessary to use the same amount of material with respect to stability or not. Individual or geometrically demanding formwork is expensive and often not cost effective, and is only rarely considered in the planning process. Stefan Peters illustrates this dilemma with a classical ceiling component, which according to Peters, is utilised throughout Europe for millions of square metres. The component is some 30 centimetres thick at all points, has a span of around eight metres and is held by supporting elements.

But it is not efficient in terms of conserving resources. In the framework of COEBRO, we thought about where we could save concrete on the ceiling elements without loss of performance. A printing robot can implement such individually designed elements on the basis of a digital model.

“You can design it relatively fast, it’s easy to implement, and actually nothing can really go wrong,” says Peters. “But it is not efficient in terms of conserving resources. In the framework of COEBRO, we thought about where we could save concrete on the ceiling elements without loss of performance. A printing robot can implement such individually designed elements on the basis of a digital model.”

But why is it important to make savings on concrete? It is principally a matter of conservation of resources, as Peters explains: “According to modern calculations, the fossil raw materials coal and oil are only usable for another 100 years in their present form – and cement and steel production need a lot of them. We will soon have to seriously ask ourselves the following question: what raw materials can we build with in the future and to what extent are the materials recyclable after they have been used? On top of this, the manufacture of common building materials releases huge quantities of CO2. A more efficient use of resources could make a lot of savings here.”

The Institute of Structural Design works in the COEBRO project alongside scientific partners of TU Graz – the Institute of Structural Concrete and the Laboratory for Structural Engineering – and a number of other partners from industry, including the energy and automation technology multinational ABB, the special-purpose machinery supplier HAGE, the chemicals company Sika, formwork and scaffolding maker Perl and prefab specialist Kirchdorfer. “We deliberately got companies on board which in their totality mirror the complete production path of a prefabricated concrete part,” explains Trummer, who is also a key player. “In this way, on the one hand, we got important insights into the real specifics of the construction industry.

In turn, the companies can extract knowledge for the future of the industry from the research results.” When 3D concrete printing has been perfected, this technology will have the potential to transform concrete construction from the ground up: “It would be a game changer.”

To check the new building technology, two prefabricated parts were realised in the COEBRO project. On the one hand, the abovementioned ceiling component with appropriate cavities. On the other hand, a complicated, ornate facade part which would be almost impossible to produce using formwork.

In mid-November, the long awaited first printing tests took place in the Laboratory for Structural Engineering – with success, as Stefan Peters is pleased to report today: "This is a really nice moment.

Until then, however, it was not an easy path. The implementation process was extremely complex and challenged a big team of project and university assistants as well as degree candidates on a daily basis. To begin with, both elements were thoroughly investigated using calculations, and all savings potentials were discussed and checked. Finally, the pathways of the robot which produces the elements had to be analysed: “If I have formwork in a particular shape, then all I have to do is to tip the concrete into it and everything works,” explains Peters. “But if I want to print out the element, I have to calculate the pathways of the robot very precisely beforehand. In fact, it’s like drawing a house without lifting the pencil off the paper.”

On the basis of the results, a suitable printing head for the robot was developed together with the industrial partners. “At the beginning, we still stirred the concrete by hand and applied it using a funnel,” Trummer remembers, thinking back to the start of the project with a smile. Today a spiral pump is used and the dry concrete mix is stored in a big bag. A suitably long tube transports the concrete to the printing head, which lays down the concrete in rows.

Optimising the printable concrete mix is a big challenge. “When printing concrete, it has to be transportable through the printing nozzles and shouldn’t clog up even with short pauses. At the same time, it has to arrive at its destination and not trickle away, and it has to bind to the layer which was applied before,” explained Andreas Trummer. “In particular, pumpability was a big problem. In the meantime, though, we’ve found a good mixture. It’s a particularly fine concrete mixture whose coarsest particles are only three millimetres big. 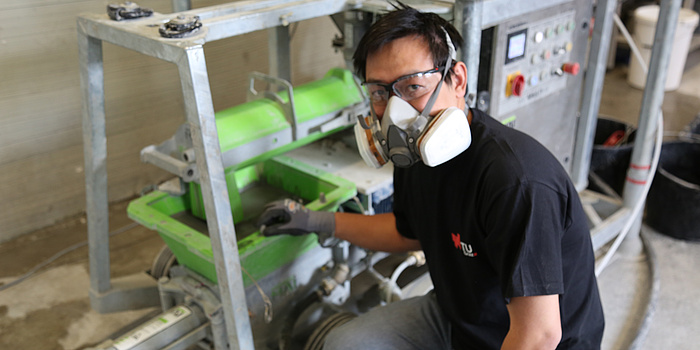 It will take some time before it is possible to just put a concrete printer in the garden and wait for it to make a prefabricated house – on this all the experts are agreed. “Our project is just a small section of this big research area. Many research teams are currently working worldwide on this topic and they are all encountering similar problems: What consistency should the concrete have? What machines can be used for printing?” explains Peters. But TU Graz is right at the forefront when it’s a matter of future fields of application of the new technology. Because very few people have thought about this up to now.

Followup projects built on the findings of COEBRO are already in the planning stage. 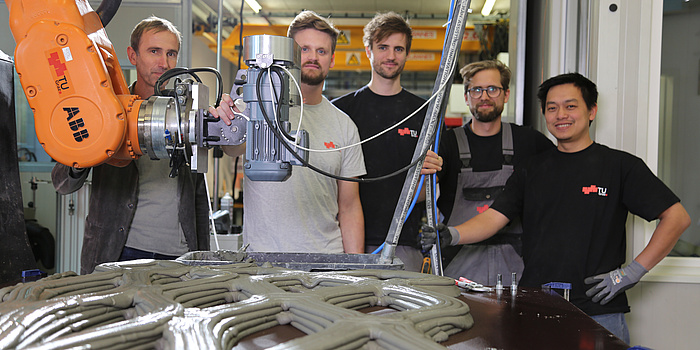 Satisfied with the result: the printing team after the successful printing of the prototype.

Under the name "digitize building", the subject area is to be brought under one roof from the end of 2019. All information on the planned project can be found on the website.